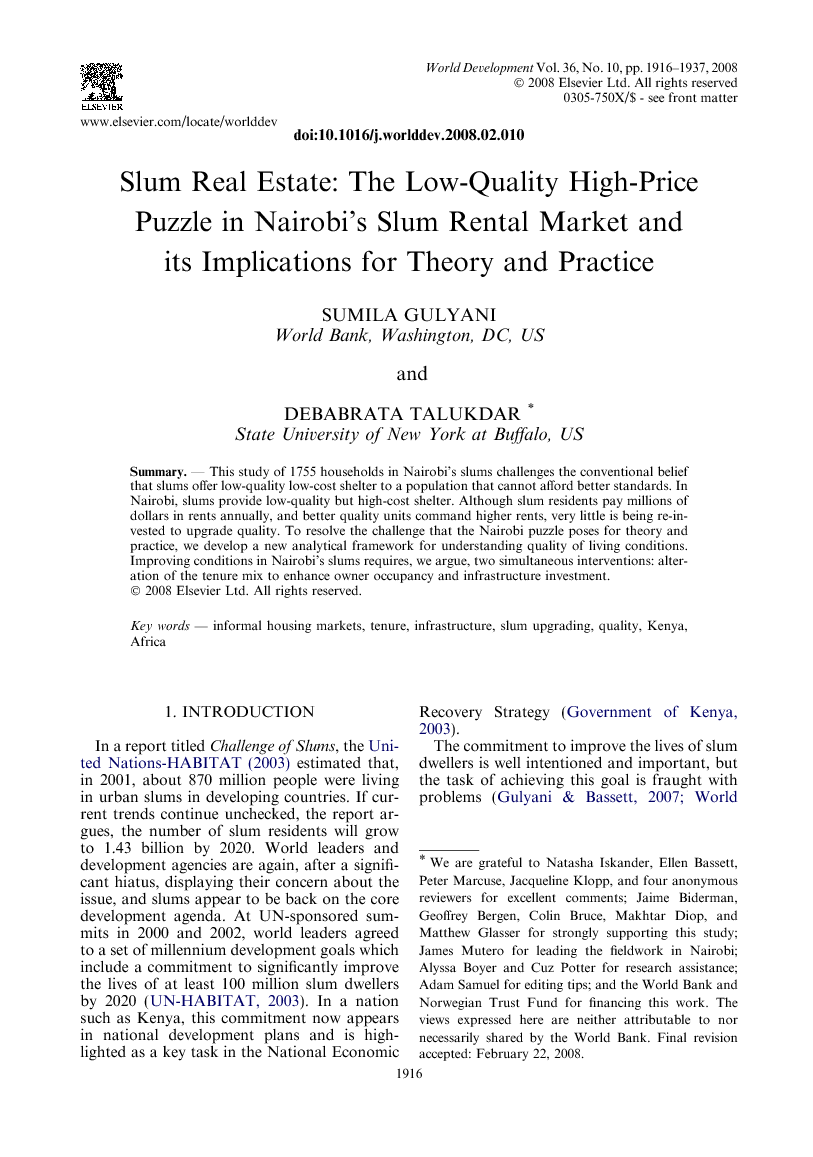 This study of 1755 households in Nairobi’s slums challenges the conventional belief that slums offer low-quality low-cost shelter to a population that cannot afford better standards. In Nairobi, slums provide low-quality but high-cost shelter. Although slum residents pay millions of dollars in rents annually, and better quality units command higher rents, very little is being re-invested to upgrade quality. To resolve the challenge that the Nairobi puzzle poses for theory and practice, we develop a new analytical framework for understanding quality of living conditions. Improving conditions in Nairobi’s slums requires, we argue, two simultaneous interventions: alteration of the tenure mix to enhance owner occupancy and infrastructure investment.

In a report titled Challenge of Slums, the United Nations-HABITAT (2003) estimated that, in 2001, about 870 million people were living in urban slums in developing countries. If current trends continue unchecked, the report argues, the number of slum residents will grow to 1.43 billion by 2020. World leaders and development agencies are again, after a significant hiatus, displaying their concern about the issue, and slums appear to be back on the core development agenda. At UN-sponsored summits in 2000 and 2002, world leaders agreed to a set of millennium development goals which include a commitment to significantly improve the lives of at least 100 million slum dwellers by 2020 (UN-HABITAT, 2003). In a nation such as Kenya, this commitment now appears in national development plans and is highlighted as a key task in the National Economic Recovery Strategy (Government of Kenya, 2003). The commitment to improve the lives of slum dwellers is well intentioned and important, but the task of achieving this goal is fraught with problems (Gulyani and Bassett, 2007 and World Bank, 2006). First, a generation of earlier efforts, starting in the 1970s, to upgrade urban slums has, at best, been only partially successful. Second, there is little information on and understanding of urban poverty in general, and the situation in slums in particular—there are few large-scale or representative studies that examine the current lives of slum residents, their living conditions, or the nature of poverty that they face. Consequently, in most developing countries, there are no reliable estimates even of basic indicators—such as the number of people residing in these slums and the proportion of them that are poor. The UN-HABITAT’s figures cited above are also the subject of much contention and debate, and the data problem is particularly acute in Sub-Saharan Africa. This type of ambiguity regarding scale combined with the lack of systematic studies documenting conditions inside informal settlements, means that our understanding of the nature of slums and their dynamics is extremely limited. Such a partial understanding may well have been a key reason for the limited success of previous programs, and is highly likely to confound the design, implementation, and success of the forthcoming generation of slum-improvement efforts as well. As a step toward addressing this gap in our knowledge base, we conducted a large-scale, and representative study of 1,755 households residing in Nairobi’s slums.1 The focus was on understanding who lives there, what they do, and how they live. In this paper, we use data from our population-weighted stratified random sample to examine one aspect of life in the slums—quality of housing and living conditions, and its relationship to the price residents pay for their accommodation. Specifically, we focus on the following questions: how inadequately housed and under-served are slum residents in Nairobi? How much do they pay for their housing and what factors explain variation in their rents? The literature on housing in developing countries valorizes slums as an affordable option for the low-income (see Gulyani & Bassett, 2007 for a recent review). It argues that although slums are sub-par from a technocratic planning perspective and unpleasant by middle-class standards, they play a crucial role by proving shelter at low-cost to the urban poor. Further, if given even implicit recognition by government—for instance, through a moratorium on evictions—these settlements consolidate and housing improves over time. We find that Nairobi’s slums constitute a serious challenge to the aforesaid conventional wisdom. In Nairobi, the slums indeed cater to low-income residents and offer low-quality living conditions. The surprise is that the residents, most of whom are very poor, are paying a large sum of money in rents each year—in 2004 they paid, on average, US$126 (Ksh 9840) per household, amounting to a cumulative sum of about US$31 million (Ksh 2.35 billion). Despite such large payments and a significant history of implicit recognition by government, however, housing in the slums has not improved and consolidated. In other words, Nairobi’s slums offer low-quality but high-cost housing, and, even worse, they seem to be stuck in this sub-optimal equilibrium. By identifying this puzzle and providing a rare insight into the scale and nature of Nairobi’s massive informal rental market, this paper makes an empirical contribution. Further, to resolve the challenge that the Nairobi case poses for both theory and practice, we develop a new framework for analyzing and improving “quality of living conditions.” Specifically, we argue that quality of living conditions must be understood along four dimensions—tenure, infrastructure, the unit itself, and the neighborhood—and that these factors interact with each other to determine the outcome. Using this framework, we show why Nairobi’s slums are stuck in a low-quality high-cost trap, and suggest how one might intervene to improve the situation. The framework also helps us understand, for example, why a slum upgrading program that focuses on improving infrastructure (rather than, say, changing the tenure status) may be the right approach in certain contexts, but is likely to fail in Nairobi’s slums. At a broader level, this framework offers a step toward a more complete theory of living conditions and their dynamics—because it facilitates a multi-dimensional understanding of quality, highlights interactions among variables and over time, and helps explain variation among contexts. This paper is structured as follows. Section 2 briefly reviews the research methodology, poverty incidence in the slums, and demographics of slum households. Section 3 focuses on living conditions—it presents the analytical framework and uses it to assess quality in Nairobi’s slums. Section 4 examines the rental market and factors influencing rents. Section 5 returns to the framework, and Section 6 concludes.

In summary, this study finds that the vast majority (92%) of Nairobi’s slum residents do not own their homes. They are tenants, and they are crammed—2.6 persons per room—in poor-quality housing structures built with impermanent materials. Their access to basic infrastructure is appalling. For instance, only 22% of slum households have an electricity connection and barely 19% have access to a supply of piped water, in the form of either an in-house water connection or a yard tap. Rents in the slums are significant, despite the informal tenure status, the poor quality of housing, and inadequate infrastructure. In 2004, slum households paid “structure owners” an average rent of about US$11 per month, a sum that amounts to an extraordinary US$31 million for the year. Unfortunately, this large cash flow does not translate into investments that improve the quality of living conditions for the residents, nor does any fraction of it accrue formally to the official land owner, that is, the government. This informal rental market, albeit distorted, appears to follow many of the rules that apply in “formal” real estate markets—rents vary with house size, quality, infrastructure access, and location. Although previous studies of Nairobi’s slums have documented some of the above features, researchers and practitioners have struggled with their interpretation of the findings. All seem to agree that the situation in Nairobi’s slums is bad, but there are major disagreements, for example, on whether the rents are too high and need to be regulated, whether the landlords are villains or not, and whether this rental housing market is helping or hurting the poor. Not surprisingly, then, there is no agreement on what to do about the “terrible living conditions” in these slums. From an academic perspective, many researchers have acknowledged that Nairobi does not fit well with their broader conceptual framework and argument, but have left the case hanging as an outlier or unresolved puzzle. We argue that Nairobi’s slums should not be dismissed as an outlier or unique case. First, we speculate that Nairobi is probably not entirely unique—there are possibly many other cities in which sub-standard slum accommodation comes at a high-price, and yet others that have slums with a high proportion of renters (Mumbai may be an example of both). Identification and analyses of such cases and rental markets are important areas for future research. Second, the Nairobi case and other alleged outliers should not be dismissed precisely because they bring into question the very core of our current understanding of slums. As difficult cases, they force us to revise or expand the conceptual frameworks that we use to analyze and understand slums. We offer the living conditions diamond as an analytical framework, and a step toward a more complete theory of the dynamics of living conditions in settlements. This framework allows us to understand, for example, why Nairobi is a difficult but not counter-intuitive case, and how its “slums of despair” might be converted into “slums of hope.” What are the implications of this study for improving living conditions in Nairobi’s slums? In Nairobi, the standard prescription of in situ upgrading of infrastructure will not work. Usual approaches to legalizing tenure or supporting rental markets are likely to benefit structure owners rather than tenants. Using the living conditions diamond, we argue that instead of choosing either infrastructure or tenure as a single entry point, the government needs to act on both simultaneously. The government can deploy infrastructure investment-cum-tenure legitimization as incentives, and use them explicitly to enhance owner occupancy in slums. The government’s goal should be to break the low-quality high-cost trap in slum housing, and one way to get there is to bring both structure owners and tenants to the table, and negotiate a deal.