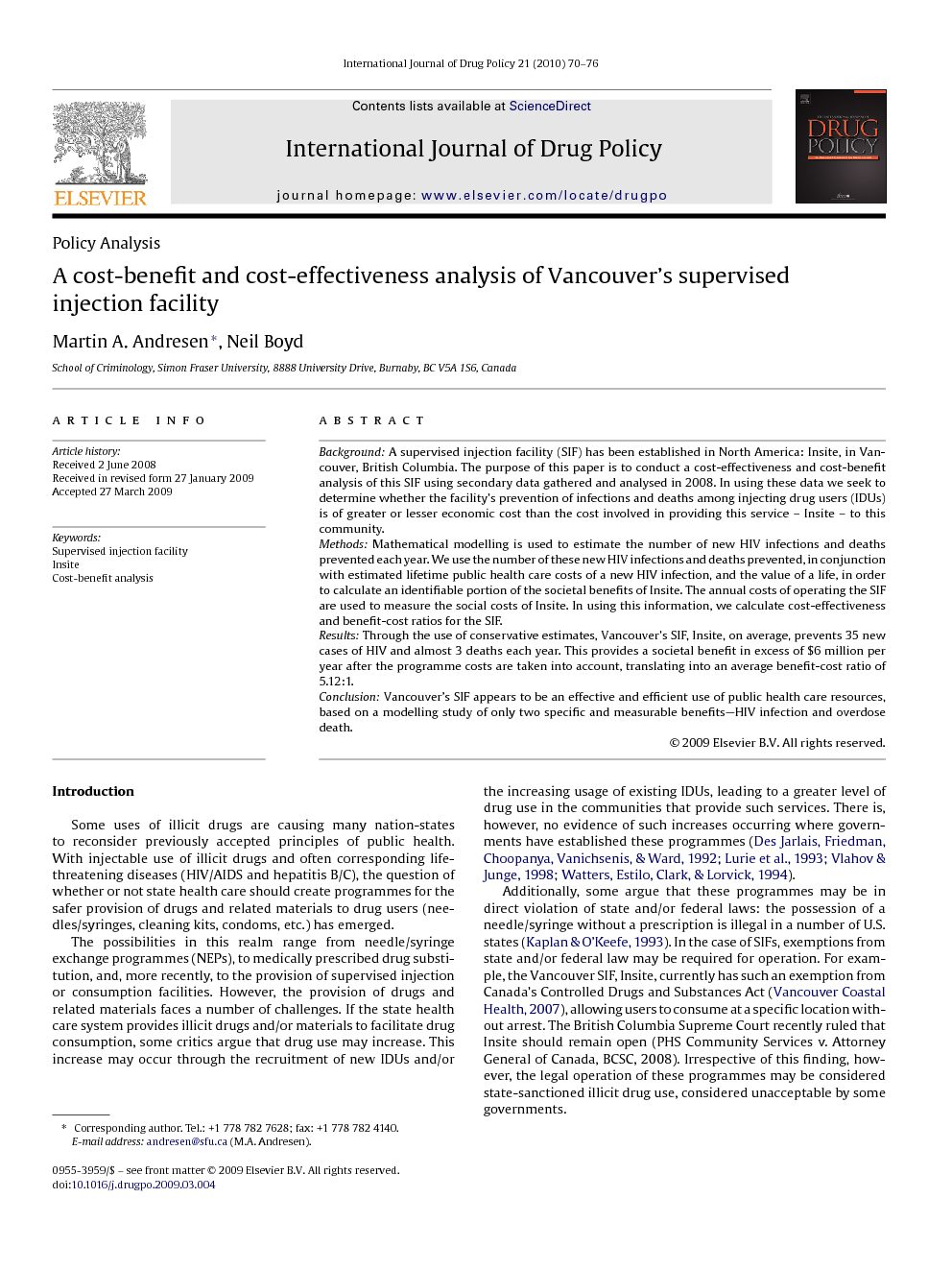 Background A supervised injection facility (SIF) has been established in North America: Insite, in Vancouver, British Columbia. The purpose of this paper is to conduct a cost-effectiveness and cost-benefit analysis of this SIF using secondary data gathered and analysed in 2008. In using these data we seek to determine whether the facility's prevention of infections and deaths among injecting drug users (IDUs) is of greater or lesser economic cost than the cost involved in providing this service – Insite – to this community. Methods Mathematical modelling is used to estimate the number of new HIV infections and deaths prevented each year. We use the number of these new HIV infections and deaths prevented, in conjunction with estimated lifetime public health care costs of a new HIV infection, and the value of a life, in order to calculate an identifiable portion of the societal benefits of Insite. The annual costs of operating the SIF are used to measure the social costs of Insite. In using this information, we calculate cost-effectiveness and benefit-cost ratios for the SIF. Results Through the use of conservative estimates, Vancouver's SIF, Insite, on average, prevents 35 new cases of HIV and almost 3 deaths each year. This provides a societal benefit in excess of $6 million per year after the programme costs are taken into account, translating into an average benefit-cost ratio of 5.12:1. Conclusion Vancouver's SIF appears to be an effective and efficient use of public health care resources, based on a modelling study of only two specific and measurable benefits—HIV infection and overdose death.

Some uses of illicit drugs are causing many nation-states to reconsider previously accepted principles of public health. With injectable use of illicit drugs and often corresponding life-threatening diseases (HIV/AIDS and hepatitis B/C), the question of whether or not state health care should create programmes for the safer provision of drugs and related materials to drug users (needles/syringes, cleaning kits, condoms, etc.) has emerged. The possibilities in this realm range from needle/syringe exchange programmes (NEPs), to medically prescribed drug substitution, and, more recently, to the provision of supervised injection or consumption facilities. However, the provision of drugs and related materials faces a number of challenges. If the state health care system provides illicit drugs and/or materials to facilitate drug consumption, some critics argue that drug use may increase. This increase may occur through the recruitment of new IDUs and/or the increasing usage of existing IDUs, leading to a greater level of drug use in the communities that provide such services. There is, however, no evidence of such increases occurring where governments have established these programmes (Des Jarlais et al., 1992, Lurie et al., 1993, Vlahov and Junge, 1998 and Watters et al., 1994). Additionally, some argue that these programmes may be in direct violation of state and/or federal laws: the possession of a needle/syringe without a prescription is illegal in a number of U.S. states (Kaplan & O’Keefe, 1993). In the case of SIFs, exemptions from state and/or federal law may be required for operation. For example, the Vancouver SIF, Insite, currently has such an exemption from Canada's Controlled Drugs and Substances Act (Vancouver Coastal Health, 2007), allowing users to consume at a specific location without arrest. The British Columbia Supreme Court recently ruled that Insite should remain open (PHS Community Services v. Attorney General of Canada, BCSC, 2008). Irrespective of this finding, however, the legal operation of these programmes may be considered state-sanctioned illicit drug use, considered unacceptable by some governments.

Vancouver's SIF appears to be an effective and efficient use of public health care resources, based on a modelling study of only two specific and measurable benefits—HIV infection and overdose death.