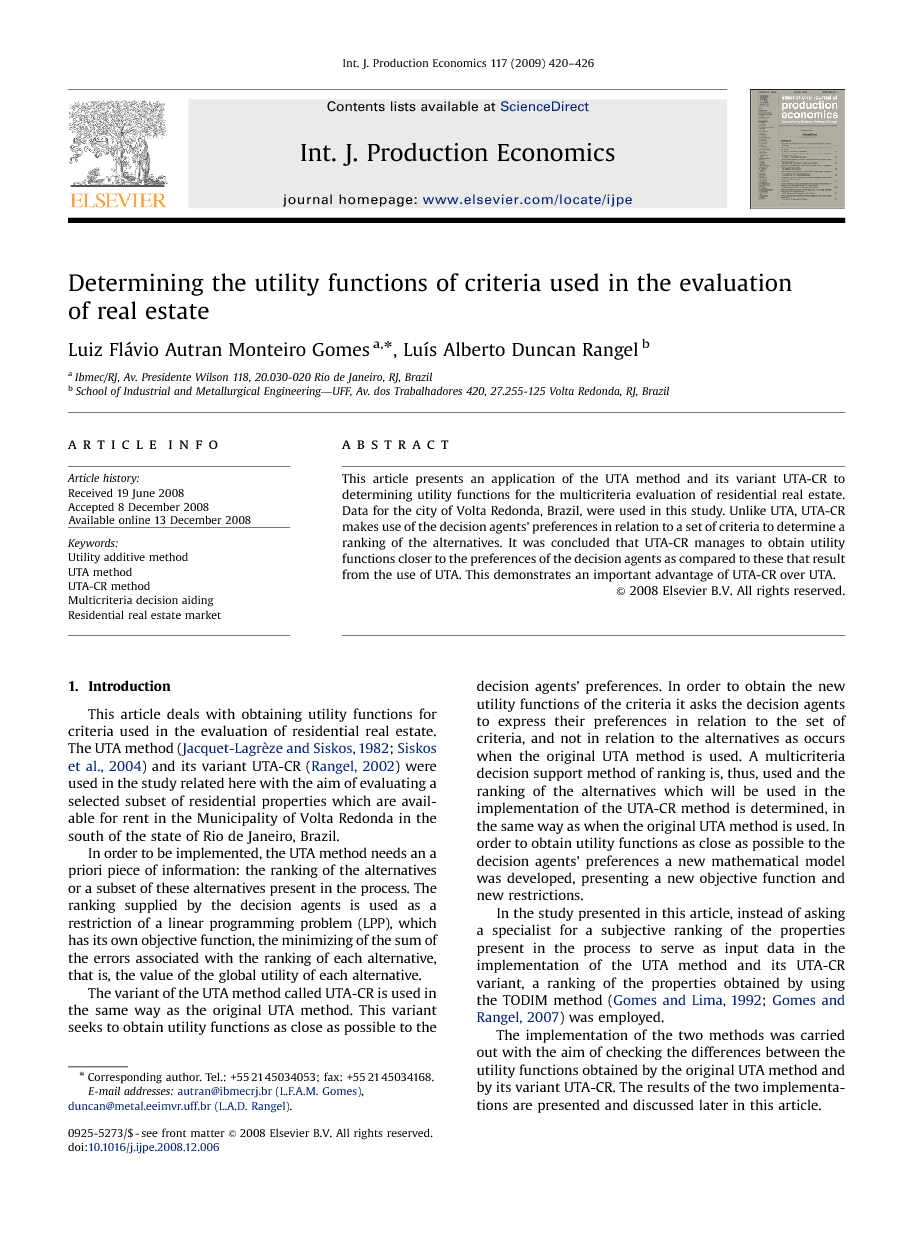 This article presents an application of the UTA method and its variant UTA-CR to determining utility functions for the multicriteria evaluation of residential real estate. Data for the city of Volta Redonda, Brazil, were used in this study. Unlike UTA, UTA-CR makes use of the decision agents’ preferences in relation to a set of criteria to determine a ranking of the alternatives. It was concluded that UTA-CR manages to obtain utility functions closer to the preferences of the decision agents as compared to these that result from the use of UTA. This demonstrates an important advantage of UTA-CR over UTA.

This article deals with obtaining utility functions for criteria used in the evaluation of residential real estate. The UTA method (Jacquet-Lagrèze and Siskos, 1982; Siskos et al., 2004) and its variant UTA-CR (Rangel, 2002) were used in the study related here with the aim of evaluating a selected subset of residential properties which are available for rent in the Municipality of Volta Redonda in the south of the state of Rio de Janeiro, Brazil. In order to be implemented, the UTA method needs an a priori piece of information: the ranking of the alternatives or a subset of these alternatives present in the process. The ranking supplied by the decision agents is used as a restriction of a linear programming problem (LPP), which has its own objective function, the minimizing of the sum of the errors associated with the ranking of each alternative, that is, the value of the global utility of each alternative. The variant of the UTA method called UTA-CR is used in the same way as the original UTA method. This variant seeks to obtain utility functions as close as possible to the decision agents’ preferences. In order to obtain the new utility functions of the criteria it asks the decision agents to express their preferences in relation to the set of criteria, and not in relation to the alternatives as occurs when the original UTA method is used. A multicriteria decision support method of ranking is, thus, used and the ranking of the alternatives which will be used in the implementation of the UTA-CR method is determined, in the same way as when the original UTA method is used. In order to obtain utility functions as close as possible to the decision agents’ preferences a new mathematical model was developed, presenting a new objective function and new restrictions. In the study presented in this article, instead of asking a specialist for a subjective ranking of the properties present in the process to serve as input data in the implementation of the UTA method and its UTA-CR variant, a ranking of the properties obtained by using the TODIM method (Gomes and Lima, 1992; Gomes and Rangel, 2007) was employed. The implementation of the two methods was carried out with the aim of checking the differences between the utility functions obtained by the original UTA method and by its variant UTA-CR. The results of the two implementations are presented and discussed later in this article.