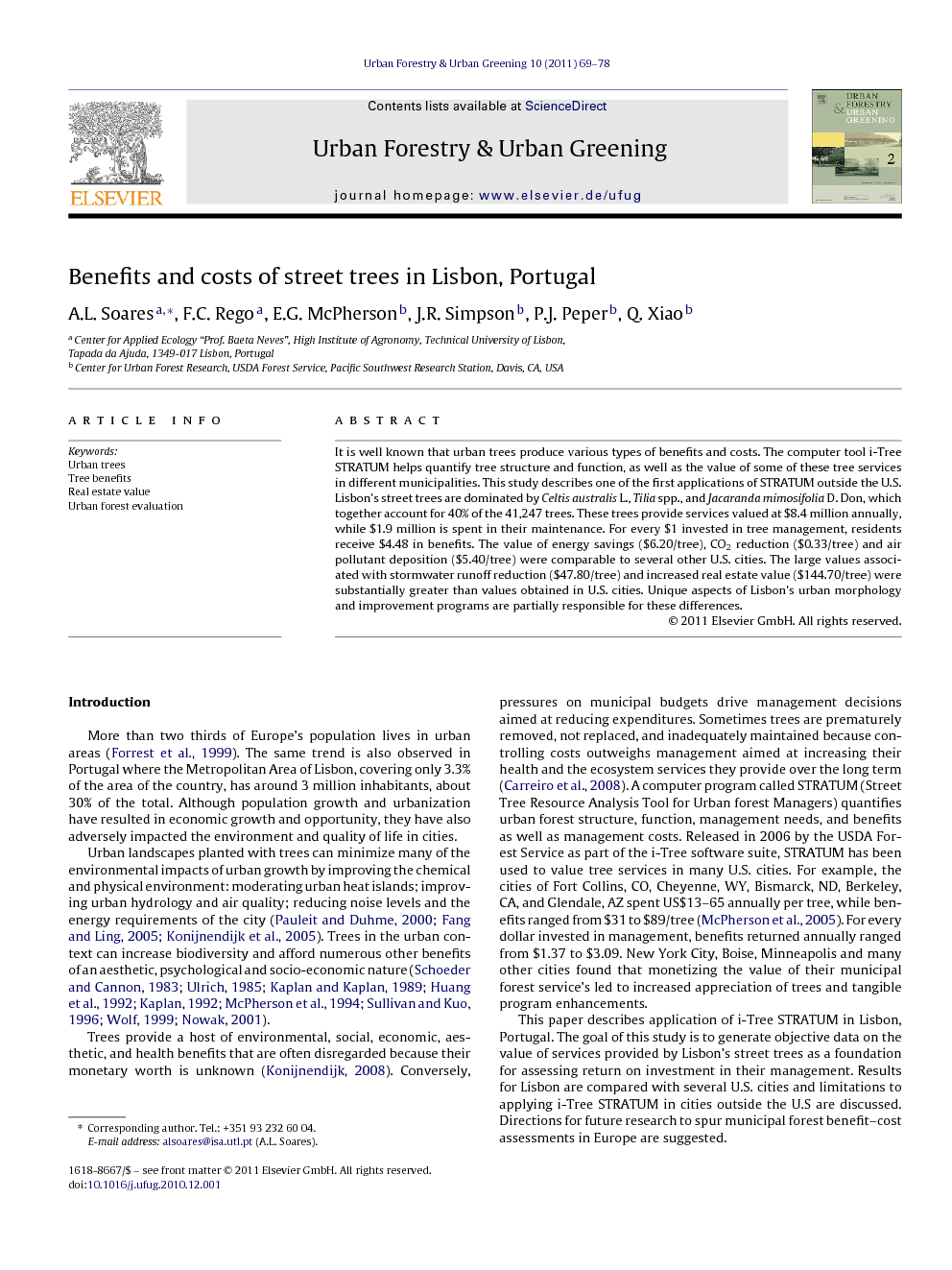 It is well known that urban trees produce various types of benefits and costs. The computer tool i-Tree STRATUM helps quantify tree structure and function, as well as the value of some of these tree services in different municipalities. This study describes one of the first applications of STRATUM outside the U.S. Lisbon's street trees are dominated by Celtis australis L., Tilia spp., and Jacaranda mimosifolia D. Don, which together account for 40% of the 41,247 trees. These trees provide services valued at $8.4 million annually, while $1.9 million is spent in their maintenance. For every $1 invested in tree management, residents receive $4.48 in benefits. The value of energy savings ($6.20/tree), CO2 reduction ($0.33/tree) and air pollutant deposition ($5.40/tree) were comparable to several other U.S. cities. The large values associated with stormwater runoff reduction ($47.80/tree) and increased real estate value ($144.70/tree) were substantially greater than values obtained in U.S. cities. Unique aspects of Lisbon's urban morphology and improvement programs are partially responsible for these differences.

More than two thirds of Europe's population lives in urban areas (Forrest et al., 1999). The same trend is also observed in Portugal where the Metropolitan Area of Lisbon, covering only 3.3% of the area of the country, has around 3 million inhabitants, about 30% of the total. Although population growth and urbanization have resulted in economic growth and opportunity, they have also adversely impacted the environment and quality of life in cities. Urban landscapes planted with trees can minimize many of the environmental impacts of urban growth by improving the chemical and physical environment: moderating urban heat islands; improving urban hydrology and air quality; reducing noise levels and the energy requirements of the city (Pauleit and Duhme, 2000, Fang and Ling, 2005 and Konijnendijk et al., 2005). Trees in the urban context can increase biodiversity and afford numerous other benefits of an aesthetic, psychological and socio-economic nature (Schoeder and Cannon, 1983, Ulrich, 1985, Kaplan and Kaplan, 1989, Huang et al., 1992, Kaplan, 1992, McPherson et al., 1994, Sullivan and Kuo, 1996, Wolf, 1999 and Nowak, 2001). Trees provide a host of environmental, social, economic, aesthetic, and health benefits that are often disregarded because their monetary worth is unknown (Konijnendijk, 2008). Conversely, pressures on municipal budgets drive management decisions aimed at reducing expenditures. Sometimes trees are prematurely removed, not replaced, and inadequately maintained because controlling costs outweighs management aimed at increasing their health and the ecosystem services they provide over the long term (Carreiro et al., 2008). A computer program called STRATUM (Street Tree Resource Analysis Tool for Urban forest Managers) quantifies urban forest structure, function, management needs, and benefits as well as management costs. Released in 2006 by the USDA Forest Service as part of the i-Tree software suite, STRATUM has been used to value tree services in many U.S. cities. For example, the cities of Fort Collins, CO, Cheyenne, WY, Bismarck, ND, Berkeley, CA, and Glendale, AZ spent US$13–65 annually per tree, while benefits ranged from $31 to $89/tree (McPherson et al., 2005). For every dollar invested in management, benefits returned annually ranged from $1.37 to $3.09. New York City, Boise, Minneapolis and many other cities found that monetizing the value of their municipal forest service's led to increased appreciation of trees and tangible program enhancements. This paper describes application of i-Tree STRATUM in Lisbon, Portugal. The goal of this study is to generate objective data on the value of services provided by Lisbon's street trees as a foundation for assessing return on investment in their management. Results for Lisbon are compared with several U.S. cities and limitations to applying i-Tree STRATUM in cities outside the U.S are discussed. Directions for future research to spur municipal forest benefit–cost assessments in Europe are suggested.

Lisbon's 41,247 street trees are providing services valued at $8.4 million annually, while $1.9 million is spent maintaining these trees. For every $1 invested in tree management, residents receive $4.48 in energy savings, cleaner air, increased property values, reduced stormwater runoff and CO2. However, 72% of total benefits are produced by the top five tree species, a rather perilous situation. To sustain this high level of benefits for future generations Lisbon should increase the diversity of its tree population, and increase stocking levels by planting more trees and prolonging the lifespan of its mature trees. Compared to most U.S. cities, Lisbon's benefit–cost ratio of 4.48:1 is high, but less than that reported for New York City (5.80:1) and Indianapolis (6.09:1) (Peper et al., 2007 and Peper et al., 2008). Annual benefits for energy, CO2, and air quality in Lisbon were reasonably close to those reported for similar U.S. cities on a per tree basis. However, benefits from rainfall interception and property values were substantially greater than found in comparable U.S. cities. Unique aspects of Lisbon's urban morphology and capital improvement programs are partially responsible for these differences. A serious limitation to applying i-Tree STRATUM was the absence of tree growth curves for the predominant species in Lisbon. Finding the “best fits” from U.S. reference cities was time consuming and a poor substitute for locally derived growth curves. Future research should strive to develop growth curves for trees in Lisbon and other climate zones throughout Europe. Most geographic data required as input to STRATUM's numerical models were readily available. Exceptions were the difficulties in calculating benefit prices for rainfall interception and property value effects. Because of its important value special efforts should be focused for the influence of street trees on the real estate values.