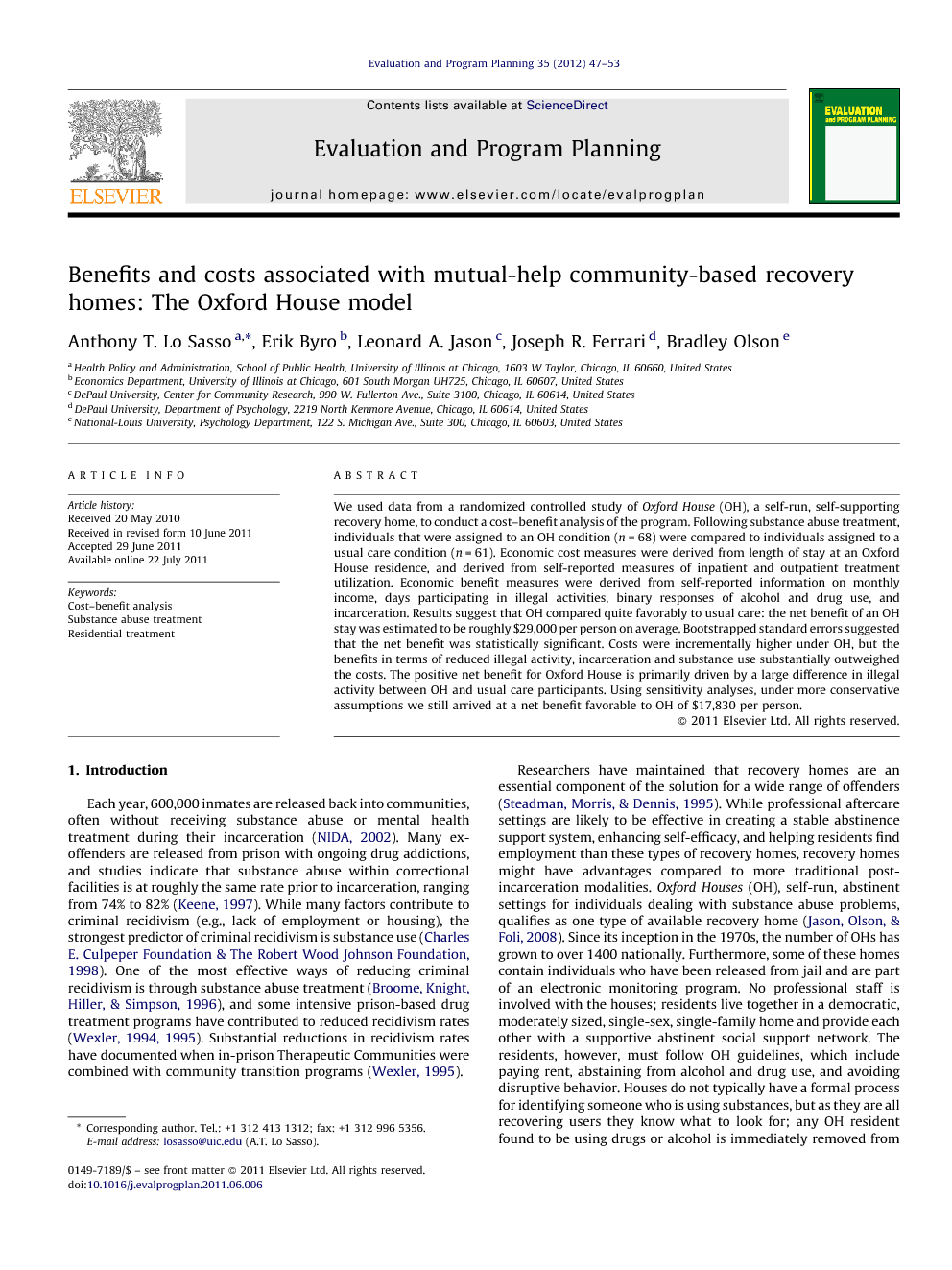 We used data from a randomized controlled study of Oxford House (OH), a self-run, self-supporting recovery home, to conduct a cost–benefit analysis of the program. Following substance abuse treatment, individuals that were assigned to an OH condition (n = 68) were compared to individuals assigned to a usual care condition (n = 61). Economic cost measures were derived from length of stay at an Oxford House residence, and derived from self-reported measures of inpatient and outpatient treatment utilization. Economic benefit measures were derived from self-reported information on monthly income, days participating in illegal activities, binary responses of alcohol and drug use, and incarceration. Results suggest that OH compared quite favorably to usual care: the net benefit of an OH stay was estimated to be roughly $29,000 per person on average. Bootstrapped standard errors suggested that the net benefit was statistically significant. Costs were incrementally higher under OH, but the benefits in terms of reduced illegal activity, incarceration and substance use substantially outweighed the costs. The positive net benefit for Oxford House is primarily driven by a large difference in illegal activity between OH and usual care participants. Using sensitivity analyses, under more conservative assumptions we still arrived at a net benefit favorable to OH of $17,830 per person.

Each year, 600,000 inmates are released back into communities, often without receiving substance abuse or mental health treatment during their incarceration (NIDA, 2002). Many ex-offenders are released from prison with ongoing drug addictions, and studies indicate that substance abuse within correctional facilities is at roughly the same rate prior to incarceration, ranging from 74% to 82% (Keene, 1997). While many factors contribute to criminal recidivism (e.g., lack of employment or housing), the strongest predictor of criminal recidivism is substance use (Charles E. Culpeper Foundation & The Robert Wood Johnson Foundation, 1998). One of the most effective ways of reducing criminal recidivism is through substance abuse treatment (Broome, Knight, Hiller, & Simpson, 1996), and some intensive prison-based drug treatment programs have contributed to reduced recidivism rates (Wexler, 1994 and Wexler, 1995). Substantial reductions in recidivism rates have documented when in-prison Therapeutic Communities were combined with community transition programs (Wexler, 1995). Researchers have maintained that recovery homes are an essential component of the solution for a wide range of offenders (Steadman, Morris, & Dennis, 1995). While professional aftercare settings are likely to be effective in creating a stable abstinence support system, enhancing self-efficacy, and helping residents find employment than these types of recovery homes, recovery homes might have advantages compared to more traditional post-incarceration modalities. Oxford Houses (OH), self-run, abstinent settings for individuals dealing with substance abuse problems, qualifies as one type of available recovery home (Jason, Olson, & Foli, 2008). Since its inception in the 1970s, the number of OHs has grown to over 1400 nationally. Furthermore, some of these homes contain individuals who have been released from jail and are part of an electronic monitoring program. No professional staff is involved with the houses; residents live together in a democratic, moderately sized, single-sex, single-family home and provide each other with a supportive abstinent social support network. The residents, however, must follow OH guidelines, which include paying rent, abstaining from alcohol and drug use, and avoiding disruptive behavior. Houses do not typically have a formal process for identifying someone who is using substances, but as they are all recovering users they know what to look for; any OH resident found to be using drugs or alcohol is immediately removed from the house. OH residents are free to decide whether to seek psychological or drug treatment by professionals or NA/AA affiliation. OH residents have the freedom to decide whether or not to seek the treatment of their choice while they receive support and guidance from peer residents (see Jason, Ferrari, Davis, & Olson, 2006, for details). In an era of constrained federal, state and local budgets, policy makers are looking for ways to achieve the greatest return on the scarce dollars available to them. Jason, Davis, Joseph, Ferrari, and Anderson (2007) examined abstinence-specific social support and successful abstention from substance use in a national sample of approximately 900 OH residents. Results were quite positive; only 18.5% of the participants over the course of the one-year study reported any substance use. Additionally, over the course of the study, increases were found in the percentage of their social networks who were abstainers or in recovery. Olson et al. (2006) examined economic costs of OH relative to the costs of impatient treatment and incarceration prior to entering the OHs. Economic estimates were derived for inpatient costs based on the OH sample, estimates from prior research sources (French, Salomé, Sindelar, & McLellan, 2002), and subsequent adjustments for inflation increases. Average yearly approximations of societal costs of inpatient care for this sample ranged from $3930 (French, Salomé, Sindelar, et al., 2002) to $16,965 (Schinka, Francis, Hughes, LaLone, & Flynn, 1998). Societal program costs for incarceration were even higher. The annual prison cost estimates per inmate ranged from $22,344 (Marion, 2002) to $62,927 (Rosten, 2003). Averaging the jail and prison figures, the annual societal program incarceration cost estimate per participant ranged from $19,989 to $40,281. The study found that costs associated with the OH program were relatively low, whereas costs associated with inpatient and incarceration history prior to entering OHs were high. This study however did not compare the costs and benefits of those in OHs to those in a comparison condition.

We used data from a randomized controlled study of OH, a self-run, self-supporting recovery home, to conduct a cost–benefit analysis of the program. The evidence presented here suggests that from a societal net benefit point of view, OH compared quite favorably to usual care. Costs were incrementally higher under OH, but the benefits in terms of reduced illegal activity, incarceration and substance use substantially outweighed the costs. The positive net benefit for OH is primarily driven by the striking difference in illegal activity between OH participants and usual care participants. As a sensitivity analysis, if we adopted a more conservative approach and halved the estimated cost to society from reported illegal activity (from $755 per day to $377 per day), we would still arrive at a net benefit favorable to OH of $18,616 per person (95% CI: 7170–30,062). There are several important limitations of our study. First, the study on which our analysis was based collected little in the way of detailed cost measures, thus it was necessary to estimate a number of important values; in all cases, we drew from the literature and attempted to err on the side of being conservative, but it is possible that our estimated dollar values were imprecise or biased. Second, while the overall response rate to the survey was high, selective non-response presented a problem. We attempted to rectify this by using a sophisticated imputation strategy, but it is still possible that systematic bias entered our estimation if non-response was not random. However, when we simply dropped non-responders, our results changed little [results not tabulated]. Third, it is possible that OH residents might disproportionately wish to mislead surveyors out of concern that they could be evicted from the OH if they revealed potential drug use, despite assurances from the research team that their responses would be held in strict confidence. Such an effect, if present, would lead to an upward bias in the net benefit estimate. Finally, our sample size was small which, despite the compelling randomized design, could lead to questions about the external generalizability.