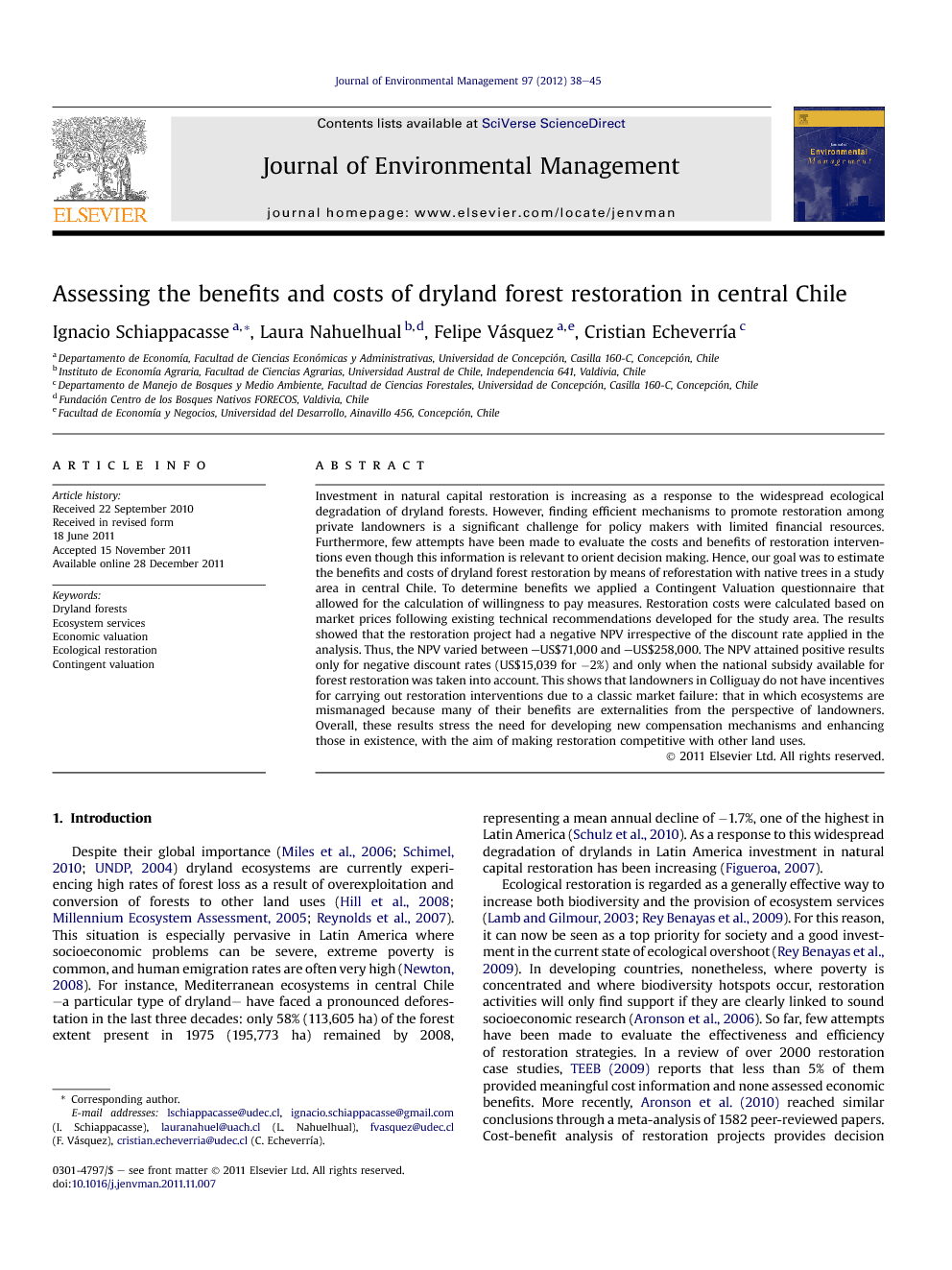 Investment in natural capital restoration is increasing as a response to the widespread ecological degradation of dryland forests. However, finding efficient mechanisms to promote restoration among private landowners is a significant challenge for policy makers with limited financial resources. Furthermore, few attempts have been made to evaluate the costs and benefits of restoration interventions even though this information is relevant to orient decision making. Hence, our goal was to estimate the benefits and costs of dryland forest restoration by means of reforestation with native trees in a study area in central Chile. To determine benefits we applied a Contingent Valuation questionnaire that allowed for the calculation of willingness to pay measures. Restoration costs were calculated based on market prices following existing technical recommendations developed for the study area. The results showed that the restoration project had a negative NPV irrespective of the discount rate applied in the analysis. Thus, the NPV varied between –US$71,000 and –US$258,000. The NPV attained positive results only for negative discount rates (US$15,039 for −2%) and only when the national subsidy available for forest restoration was taken into account. This shows that landowners in Colliguay do not have incentives for carrying out restoration interventions due to a classic market failure: that in which ecosystems are mismanaged because many of their benefits are externalities from the perspective of landowners. Overall, these results stress the need for developing new compensation mechanisms and enhancing those in existence, with the aim of making restoration competitive with other land uses.

Despite their global importance (Miles et al., 2006; Schimel, 2010; UNDP, 2004) dryland ecosystems are currently experiencing high rates of forest loss as a result of overexploitation and conversion of forests to other land uses (Hill et al., 2008; Millennium Ecosystem Assessment, 2005; Reynolds et al., 2007). This situation is especially pervasive in Latin America where socioeconomic problems can be severe, extreme poverty is common, and human emigration rates are often very high (Newton, 2008). For instance, Mediterranean ecosystems in central Chile –a particular type of dryland– have faced a pronounced deforestation in the last three decades: only 58% (113,605 ha) of the forest extent present in 1975 (195,773 ha) remained by 2008, representing a mean annual decline of −1.7%, one of the highest in Latin America (Schulz et al., 2010). As a response to this widespread degradation of drylands in Latin America investment in natural capital restoration has been increasing (Figueroa, 2007). Ecological restoration is regarded as a generally effective way to increase both biodiversity and the provision of ecosystem services (Lamb and Gilmour, 2003; Rey Benayas et al., 2009). For this reason, it can now be seen as a top priority for society and a good investment in the current state of ecological overshoot (Rey Benayas et al., 2009). In developing countries, nonetheless, where poverty is concentrated and where biodiversity hotspots occur, restoration activities will only find support if they are clearly linked to sound socioeconomic research (Aronson et al., 2006). So far, few attempts have been made to evaluate the effectiveness and efficiency of restoration strategies. In a review of over 2000 restoration case studies, TEEB (2009) reports that less than 5% of them provided meaningful cost information and none assessed economic benefits. More recently, Aronson et al. (2010) reached similar conclusions through a meta-analysis of 1582 peer-reviewed papers. Cost-benefit analysis of restoration projects provides decision makers with information by which they can gauge the efficiency of restoration investments (Holmes et al., 2004). This is especially significant for private landowners who must balance conservation goals and economic benefits (Goldstein et al., 2008; Holl and Howarth, 2000).

This work represents one of the first attempts to value ecological restoration of dryland forest ecosystem services in Latin America. Our main objective, estimating the net benefits that local people obtain from dryland forest restoration, was accomplished. The results showed that landowners in the study area do not have incentives for carrying out forest ecosystem services restoration, even when considering the available subsidy for restoration interventions. Thus, the subsidy stated in the RNF is simply not enough to make a change in the economic behavior of landowners. These results stress the need for developing new compensation mechanisms, enhancing those in existence, and creating new markets for natural capital that encourage landowners to engage in forest restoration practices. If we want to implement effective incentives for dryland forest ecosystem restoration, it is necessary to radically change the current system of economic incentives, which includes environmentally harmful subsidies such as Decree Law 701. The development of public policies regarding forest restoration has to consider increasing the profitability of the restoration interventions. Therefore, future research should focus on identifying: (i) ecological restoration approaches based on species of economic value that will generate the greatest financial revenues; (ii) the subsidy level that will make restoration competitive with other land uses; and (iii) how much value landowners assign to their environmental preferences; in other words, how much are they willing to sacrifice in terms of return rates for carrying out a restoration project.