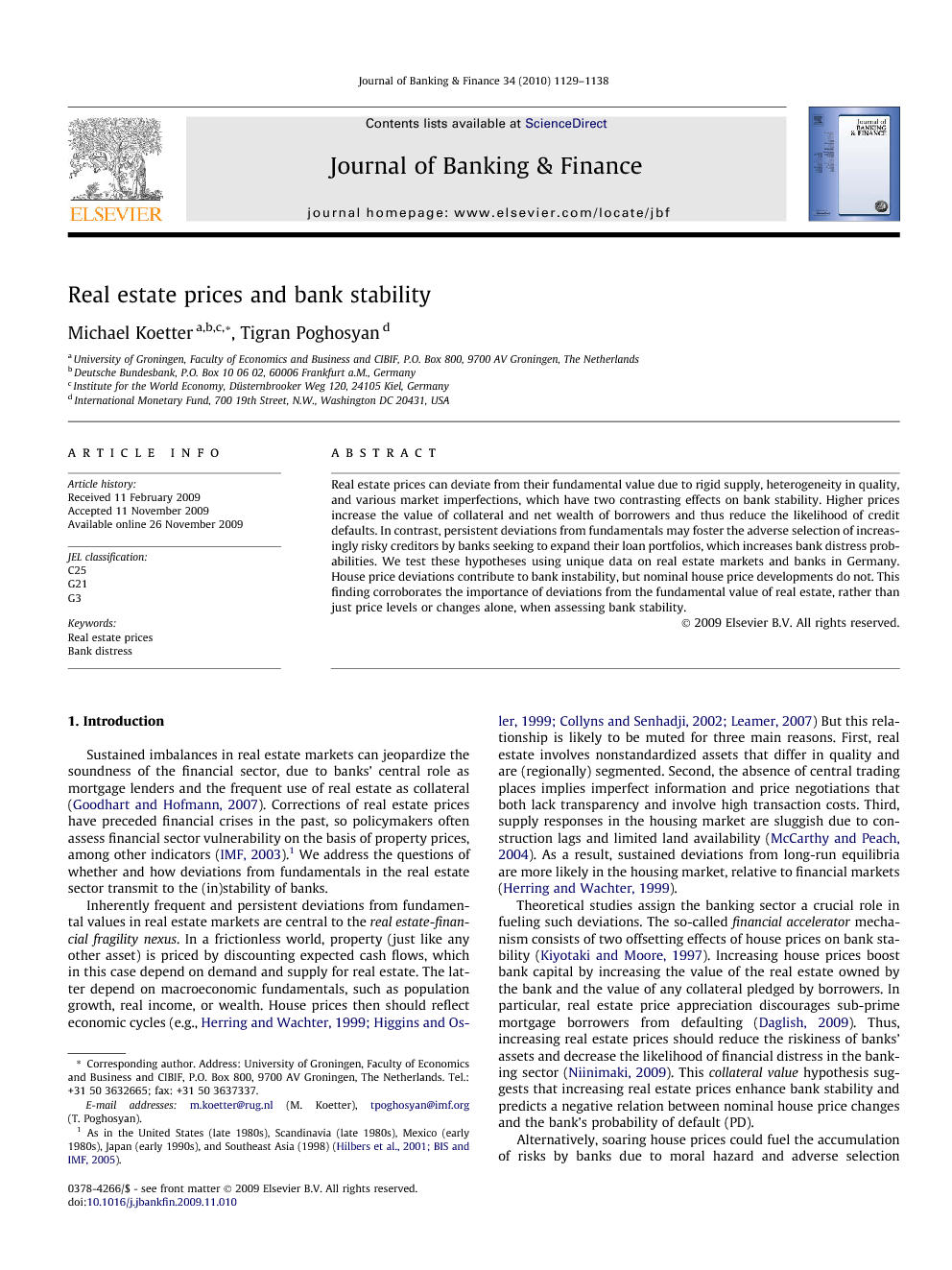 Real estate prices can deviate from their fundamental value due to rigid supply, heterogeneity in quality, and various market imperfections, which have two contrasting effects on bank stability. Higher prices increase the value of collateral and net wealth of borrowers and thus reduce the likelihood of credit defaults. In contrast, persistent deviations from fundamentals may foster the adverse selection of increasingly risky creditors by banks seeking to expand their loan portfolios, which increases bank distress probabilities. We test these hypotheses using unique data on real estate markets and banks in Germany. House price deviations contribute to bank instability, but nominal house price developments do not. This finding corroborates the importance of deviations from the fundamental value of real estate, rather than just price levels or changes alone, when assessing bank stability.

This study tests two competing views of the relation between real estate markets and bank distress: the collateral value and the deviation hypotheses. The former suggests a negative relation because rising nominal house prices increase the value of collateral pledged and enhance the financial positions of bank customers. The latter theory conjectures that house price deviations from fundamental values jeopardize bank stability due to excessively risky lending. Rather than merely relating the observed real estate price changes though, we estimate deviations from fundamental values in 78 regional real estate markets in Germany, thereby taking the heterogeneous and immobile nature of property explicitly into account. Furthermore, we use regulatory information about distress at the bank level, which mitigates concerns pertaining to aggregate measures of banking system stability. We thus can estimate the relation between real estate market disequilibria and financial fragility at the bank level. Even in Germany’s real estate market, which is characterized by moderate price developments that differ considerably across regions, deviations from fundamental values exist. In line with US-based studies, we find that adjustment speeds are low. Within a year, house prices adjust by only 10% toward the equilibrium, which underscores the importance of considering not only real estate price levels and changes but also and in particular their relation to the macroeconomic conditions. Deviations in real estate markets are fairly dispersed across regions. In contrast to price-level changes, deviations contribute significantly to a bank’s probability of distress, which refutes the collateral value hypothesis. In line with the deviation hypothesis, the impact of real estate imbalances on bank stability is comparable in magnitude to the impact of cost efficiency, nonperforming credit shares, and liquidity levels. Specialized banks are not significantly different from universal banks regarding the effect of house prices on PDs; universal banks have thus neither an advantage in terms of portfolio diversification nor disadvantages due to a potential lack of expertise in mortgage lending. Our results pertain to a relatively brief period in Germany, where real estate markets can hardly be called overheated. Further evidence about the real estate-financial fragility nexus from economies with different real estate market developments and longer time series would therefore be of great interest. Nevertheless, our findings are robust to the specification of different lags and further possible macro variables determining bank PDs directly, so we consider the reported evidence about the importance of real estate market deviations from fundamentals rather than price levels to be a general result.