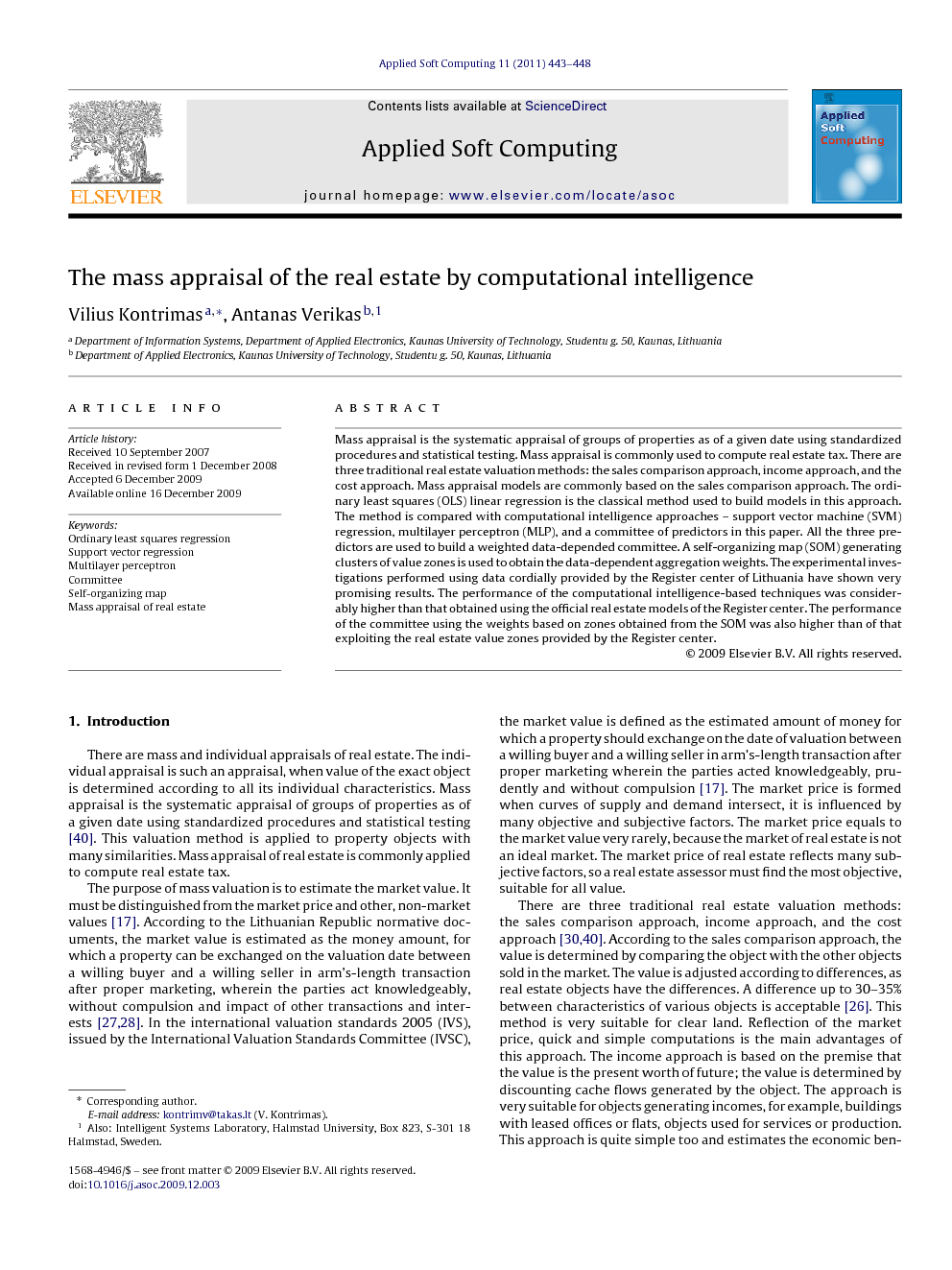 Mass appraisal is the systematic appraisal of groups of properties as of a given date using standardized procedures and statistical testing. Mass appraisal is commonly used to compute real estate tax. There are three traditional real estate valuation methods: the sales comparison approach, income approach, and the cost approach. Mass appraisal models are commonly based on the sales comparison approach. The ordinary least squares (OLS) linear regression is the classical method used to build models in this approach. The method is compared with computational intelligence approaches – support vector machine (SVM) regression, multilayer perceptron (MLP), and a committee of predictors in this paper. All the three predictors are used to build a weighted data-depended committee. A self-organizing map (SOM) generating clusters of value zones is used to obtain the data-dependent aggregation weights. The experimental investigations performed using data cordially provided by the Register center of Lithuania have shown very promising results. The performance of the computational intelligence-based techniques was considerably higher than that obtained using the official real estate models of the Register center. The performance of the committee using the weights based on zones obtained from the SOM was also higher than of that exploiting the real estate value zones provided by the Register center.

Ordinary (OLS regression) and computational intelligence-based techniques (MLP, SVM, and a committee comprised of all the three types of models) have been evaluated in the mass appraisal of real estate task. Many previous authors reported diverse results when comparing the MLP and OLS regression based approaches. Our results also indicated the superiority of OLS regression over the MLP. However, the SVM clearly outperformed both the OLS regression and MLP based models. The results indicate that non-linear modeling is required. SVM as being capable of non-linear modeling and finding the global minimum of the cost function suits very well for the task. The proposed committee of models has shown an excellent performance and clearly outperformed the separate predictors. The number of unacceptable valuations, which is the main parameter in the mass appraisal tasks, was only 1. It means that only 1% of valuations do not satisfy the accuracy limits for the mass appraisal. A new approach to obtaining data-dependent aggregation weights to build a weighted averaging committee of models has been presented in this work. Two ways of obtaining the weights were explored, namely the weights based on value zones obtained from experts of the Register center and the weights based on clusters (zones) provided by SOM without using any information from the experts. Clusters obtained from the Register center and SOM were quite different. This can be explained by the homogeneity of the whole area. Thus, the impact of house place was not so important in comparison to its main characteristics. The committee results obtained using SOM clusters were slightly better than those based on the Register center value zones. Therefore, SOM can be used for effective clustering of the real estate data. The much better performance obtained from the computational intelligence-based techniques than from the official models shows the great practical impact of this study.