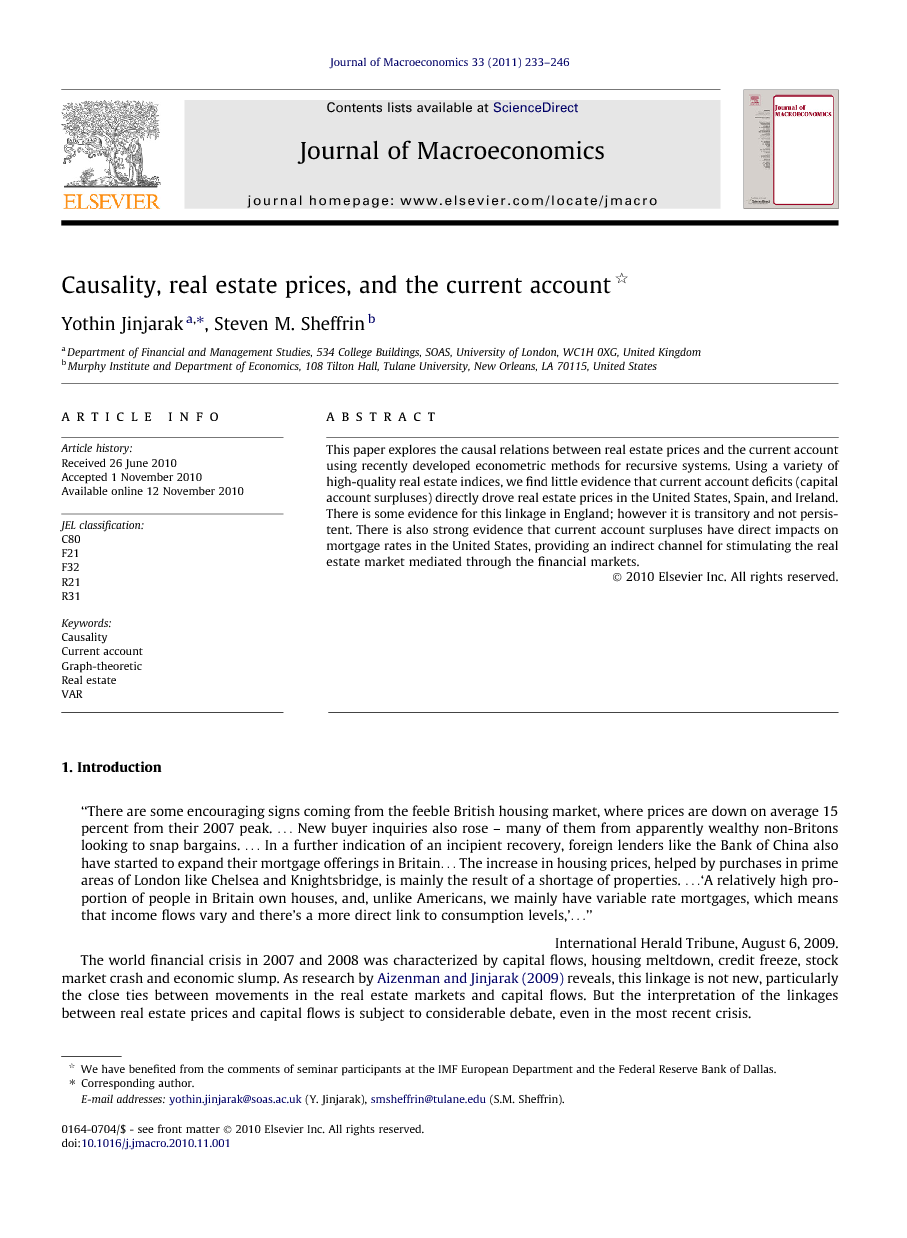 This paper explores the causal relations between real estate prices and the current account using recently developed econometric methods for recursive systems. Using a variety of high-quality real estate indices, we find little evidence that current account deficits (capital account surpluses) directly drove real estate prices in the United States, Spain, and Ireland. There is some evidence for this linkage in England; however it is transitory and not persistent. There is also strong evidence that current account surpluses have direct impacts on mortgage rates in the United States, providing an indirect channel for stimulating the real estate market mediated through the financial markets.

Untangling causal relations in macro models is very difficult. However, to understand the effects of shocks and the genesis of crisis, it is important to attempt to make causal inferences and uncover structural shocks. The graph theoretic methods employed in this paper can be a useful tool to clarify complex relations, such as those between the current account and real estate prices. Using a variety of high-quality real estate indices and macro variables, with careful attention to the stationarity of our time series, we find little evidence for strong effects from capital account surpluses directly to real estate. As might be expected from their different institutional structures (as illustrated in our opening quote), there do appear to be differences between the United States and England. In the United States, capital account surpluses do drive down mortgage interest rates temporarily and can have an indirect effect on real estate prices. In England, there is a direct connection, but it is transitory and not permanent. The results from structural VAR serve as the best possible case for current account – real estate price channel. Our results suggest that drawing analogies between the Asian financial crisis with its own real estate and real exchange rate appreciation and the most recent global crisis may be misplaced. Not only did the Asian countries have less developed financial markets but they also typically had fixed exchange rates, in contrast to the US and England. Moreover, our work also suggests that simplistic idea of a “savings glut” driving real estate booms is also misplaced. To the extent that current account surpluses affected real estate, they were mediated through financial markets. In principle, policy makers would have other mechanisms to control financial markets to offset any current account effects.