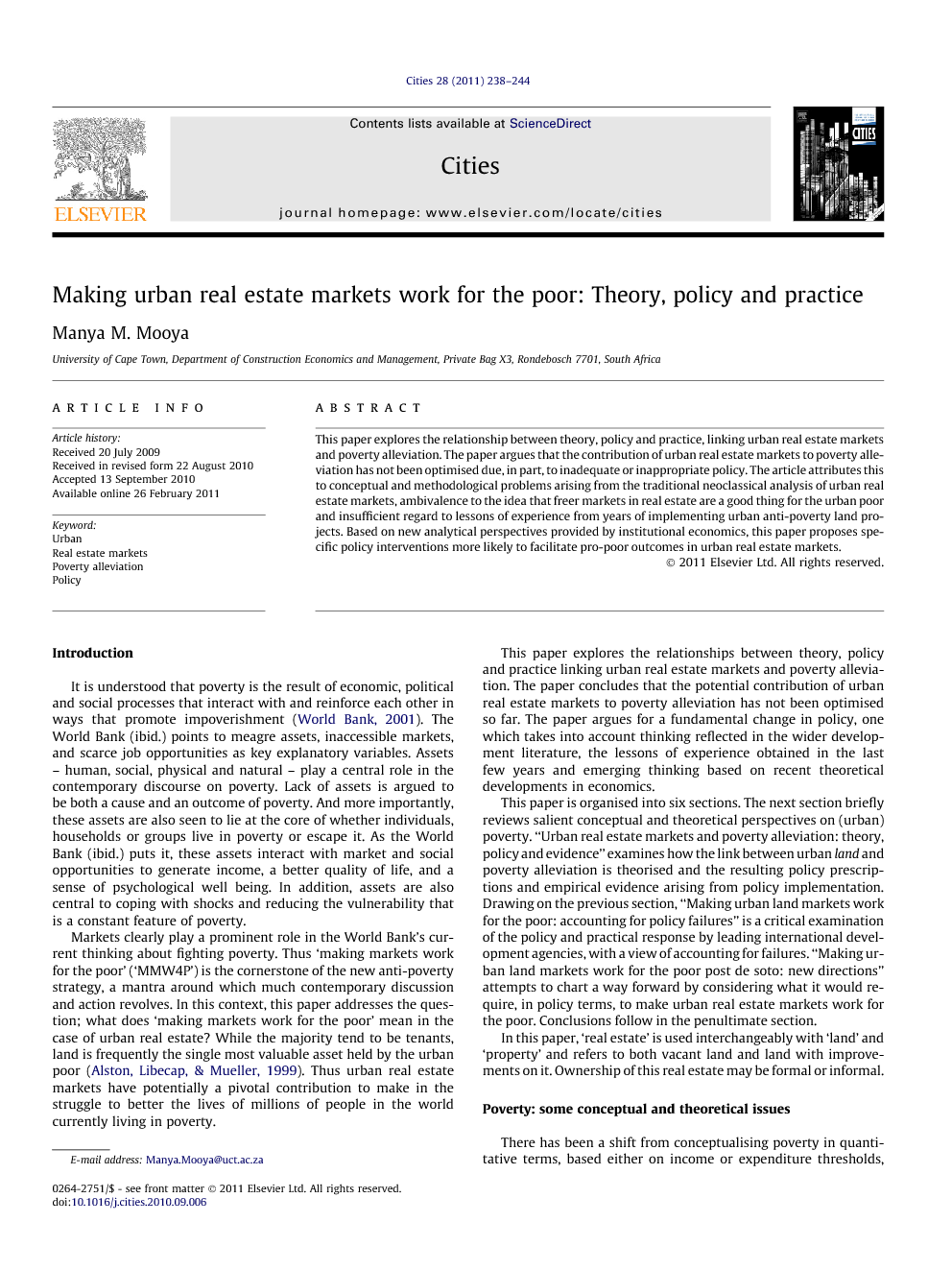 It is understood that poverty is the result of economic, political and social processes that interact with and reinforce each other in ways that promote impoverishment (World Bank, 2001). The World Bank (ibid.) points to meagre assets, inaccessible markets, and scarce job opportunities as key explanatory variables. Assets – human, social, physical and natural – play a central role in the contemporary discourse on poverty. Lack of assets is argued to be both a cause and an outcome of poverty. And more importantly, these assets are also seen to lie at the core of whether individuals, households or groups live in poverty or escape it. As the World Bank (ibid.) puts it, these assets interact with market and social opportunities to generate income, a better quality of life, and a sense of psychological well being. In addition, assets are also central to coping with shocks and reducing the vulnerability that is a constant feature of poverty. Markets clearly play a prominent role in the World Bank’s current thinking about fighting poverty. Thus ‘making markets work for the poor’ (‘MMW4P’) is the cornerstone of the new anti-poverty strategy, a mantra around which much contemporary discussion and action revolves. In this context, this paper addresses the question; what does ‘making markets work for the poor’ mean in the case of urban real estate? While the majority tend to be tenants, land is frequently the single most valuable asset held by the urban poor (Alston, Libecap, & Mueller, 1999). Thus urban real estate markets have potentially a pivotal contribution to make in the struggle to better the lives of millions of people in the world currently living in poverty. This paper explores the relationships between theory, policy and practice linking urban real estate markets and poverty alleviation. The paper concludes that the potential contribution of urban real estate markets to poverty alleviation has not been optimised so far. The paper argues for a fundamental change in policy, one which takes into account thinking reflected in the wider development literature, the lessons of experience obtained in the last few years and emerging thinking based on recent theoretical developments in economics. This paper is organised into six sections. The next section briefly reviews salient conceptual and theoretical perspectives on (urban) poverty. “Urban real estate markets and poverty alleviation: theory, policy and evidence” examines how the link between urban land and poverty alleviation is theorised and the resulting policy prescriptions and empirical evidence arising from policy implementation. Drawing on the previous section, “Making urban land markets work for the poor: accounting for policy failures” is a critical examination of the policy and practical response by leading international development agencies, with a view of accounting for failures. “Making urban land markets work for the poor post de soto: new directions” attempts to chart a way forward by considering what it would require, in policy terms, to make urban real estate markets work for the poor. Conclusions follow in the penultimate section. In this paper, ‘real estate’ is used interchangeably with ‘land’ and ‘property’ and refers to both vacant land and land with improvements on it. Ownership of this real estate may be formal or informal.

With the 2015 target date, set by the Millennium Developments Goals (MDGs), for halving the number of the very poor rapidly approaching, there is increased pressure to explore ways of accelerating poverty alleviation. Recent approaches to fighting poverty, as encapsulated by the ‘MMW4P’ framework, focus on changing the structure and characteristics of markets to increase participation by the poor on terms that are of benefit to them (DfiD, 2005). Urban real estate markets potentially provide a particularly efficacious tool for poverty alleviation as real estate is often the significant asset held by the poor. This paper explored the relationships between theory, policy and practice linking real estate markets and poverty alleviation. The paper argued that the potential contribution of real estate markets to poverty alleviation has not been optimised so far and attributes this to inadequate or inappropriate policy stemming from three main reasons. Firstly, there are conceptual and methodological problems arising from the traditional neoclassical analysis of real estate markets. This approach to the study of real estate markets has meant that many of the questions relevant to the leveraging of these markets for poverty alleviation have remained unasked. Policy has, therefore, been largely based on inappropriate premises. Secondly, there is widespread ambivalence, if not outright hostility, to the idea that freer markets in land are a good thing for the urban poor. A number of policy makers and researchers hold the view that freer markets would exacerbate poverty (see Deininger & Binswanger, 1999). It has been argued that many of these views lack unequivocal empirical support. Many are motivated by antipathy towards capitalism or paternalistic opinions of the poor. Lastly, there has been insufficient regard to empirical evidence, which has demonstrated that land titles do not, in the main, foster credit markets and that promoting the latter as the principle instrument for poverty alleviation using real estate is no longer a credible policy option. The paper argues that recent theoretical developments in institutional analysis provide a more appropriate basis from which we can begin to operationalise the ‘MMW4P” framework in the context of urban land. This new thinking suggests that increased market activity, arising out of decreased transaction costs, is the key to leveraging urban real estate markets for poverty alleviation. Key areas of policy intervention lie in the creation of appropriate property rights systems, expansion of physical infrastructure and the building of shared understanding and trust in urban communities.