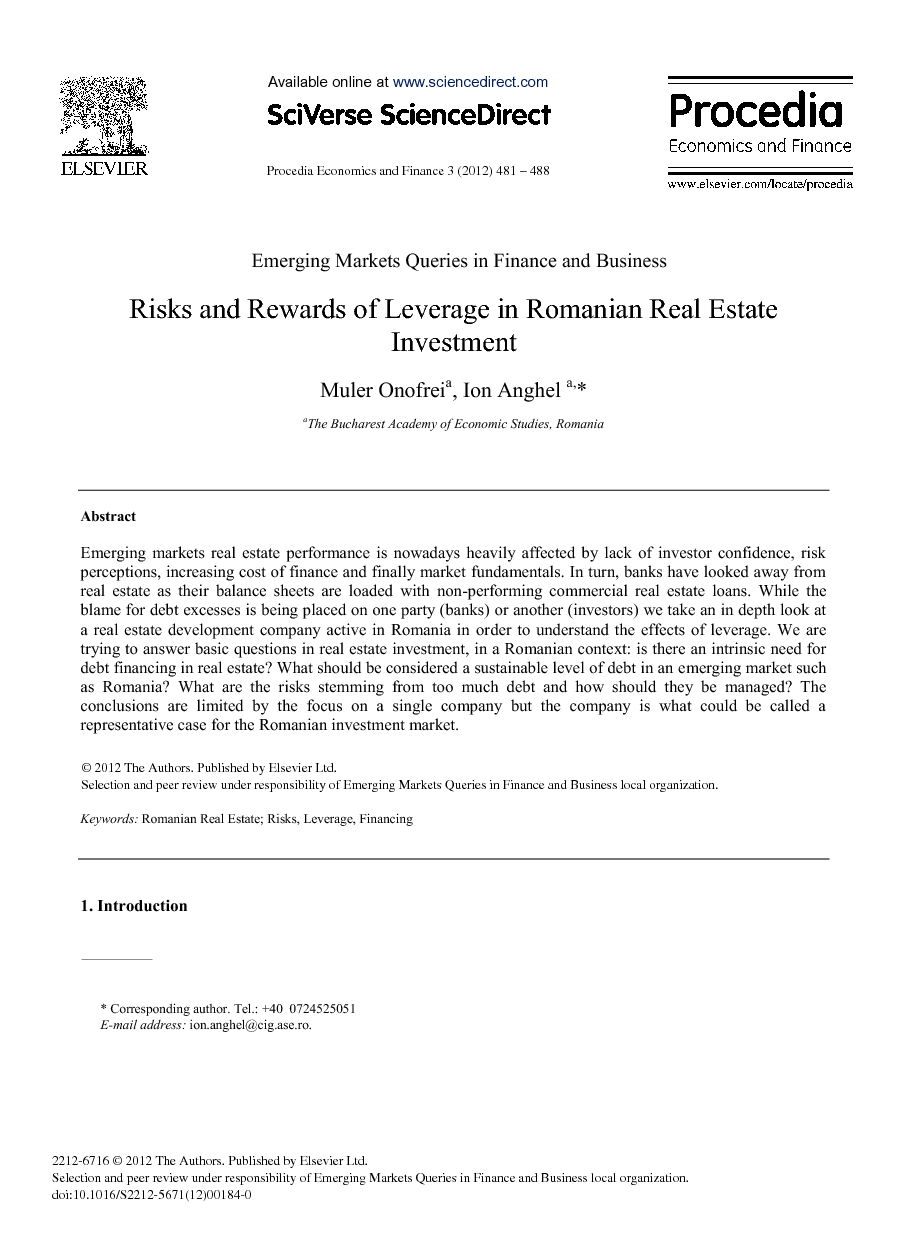 Emerging markets real estate performance is nowadays heavily affected by lack of investor confidence, risk perceptions, increasing cost of finance and finally market fundamentals. In turn, banks have looked away from real estate as their balance sheets are loaded with non-performing commercial real estate loans. While the blame for debt excesses is being placed on one party (banks) or another (investors) we take an in depth look at a real estate development company active in Romania in order to understand the effects of leverage. We are trying to answer basic questions in real estate investment, in a Romanian context: is there an intrinsic need for debt financing in real estate? What should be considered a sustainable level of debt in an emerging market such as Romania? What are the risks stemming from too much debt and how should they be managed? The conclusions are limited by the focus on a single company but the company is what could be called a representative case for the Romanian investment market.

The last real estate driven financial crisis has been thoroughly investigated and conclusions were drawn about behavioral economics, interest rates, risk management and many other interesting subjects. Romanian real estate, as a phenomenon at the frontier of the Western born real estate boom, was however rarely considered for research bar for the international consultancies assisting investors in the region. Distant as it is from the center, the real estate development and investment spree worked however in much the same manner as in more mature economies, fueled by bank lending and strong demand, only that everything happened on a fast track forward during the course of, say, 4-5 years. We are trying to shed light into the rationality that led to such a fast expansion and contraction of a market that was simply non-existent at the end of the 90s by investigating the characteristics of decision making related to the projects developed by the local subsidiary of a European developer. In doing so we are trying to understand the decision making rationality at work when significant levels of debt are accessed, risks are overlooked and rewards are overestimated. Regarding the methodology, we start by taking a look at the Romanian real estate financing market as the root of the property investment meta-narrative and move to the concrete company level approach in trying to understand the risk/reward trade-off and the consequences for the company. At company level we have conducted a series of non-structured interviews with management and operational staff in the local subsidiary and we also had several meetings with the general management of the group. We have gathered data about the projects and we had access to project calculation sheets, financing contracts, cost variance reports. We interpreted the data in relation to the wider market context.