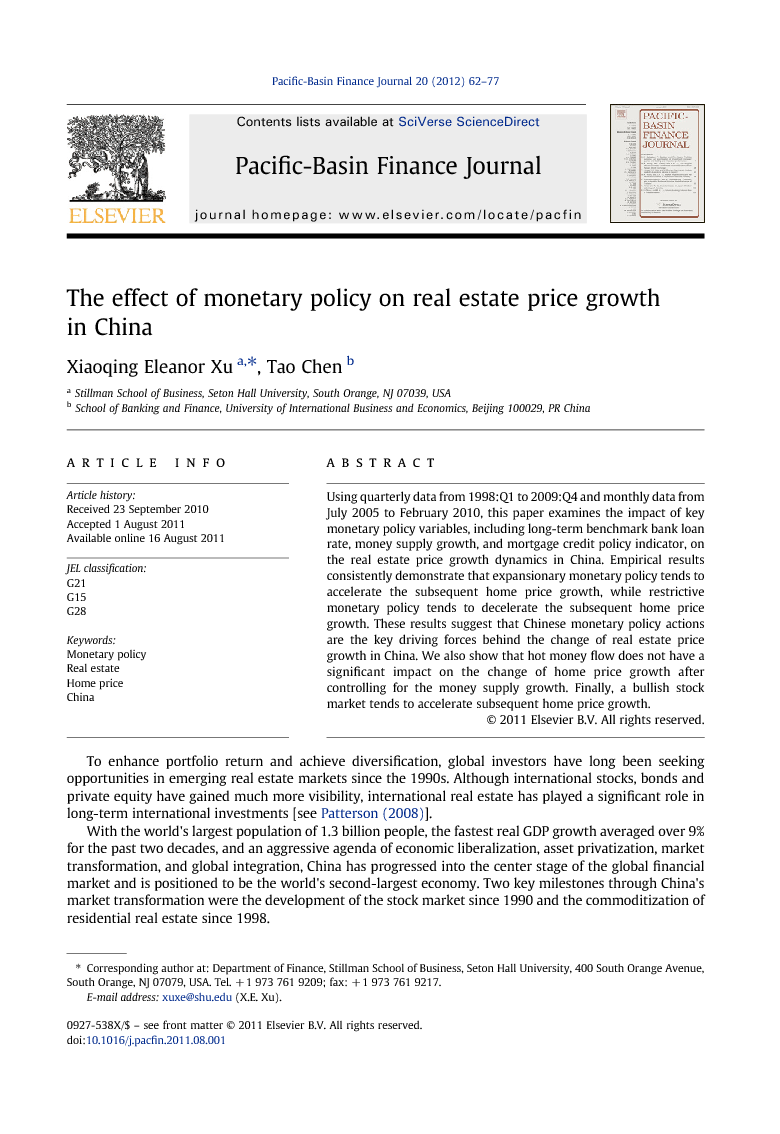 Housing was part of China's employment-based benefit system when the majority of employees work in government institutions or state-owned enterprises received free housing allocated by their employers.4 The housing reform in the early 1990s was called for due to the heavy financial burden on government created by the free employment-based housing benefit system. The commodity housing units in the initial reform period were mainly purchased by government institutions and state-owned enterprises, which in turn allocated housing to their employees at only a fraction of the market cost. In 1998, the housing system of distribution in kind via employer subsidy was completely dismantled in China. This marks the official start of the residential real estate market in China and the beginning of the sample period used in this empirical study. From January 1998 through February 2010, the Chinese real estate market has gone through four phases of development: Phase 1. From January 1998 to May 2003: steady real estate price increase under expansionary monetary policy Since 1998, China adopted an expansionary monetary policy to stimulate domestic demand and combat the Asian Financial Crisis. The minimum down payment was only 20%, and the mortgage rate5 dropped from 10.53% to 5.76% during this period. The commercial banks were encouraged to make mortgage loans to individuals under the central bank's window guidance. During this period, the real estate price emerged out of the negative impact of the Asian Financial Crisis and increased at a steady speed, with the national home price growth index averaged at 1.97% year over year.6 Phase 2. From June 2003 to August 2008: dramatic real estate price growth despite tightening monetary policy In order to prevent price speculation and foster healthy development in the real estate market, the central bank began to perform tightening monetary policy since June 2003. Besides the traditional monetary policy tools such as higher reserve requirements, higher benchmark bank loan rates, and open market selling of government securities and central bank bills, the PBC also proclaimed a series of notices to commercial banks to tighten the control on real estate loans. For example, the minimum down payment for the regular first home (below 90 m2) was raised to over 20%, the large first home (above 90 m2) was raised to over 30%, and the second home was raised to over 40%. In addition, the mortgage rate was raised eight times, from 5.76% to 7.83%. Although the general monetary policy and mortgage credit policy were clearly tightened during this period, the Chinese real estate market price continued to soar. With the large trade and capital surplus and a managed-floating foreign exchange system, the PBC had to purchase a large amount of foreign exchange, which resulted in the rapid increase of base money and money supply. Thus, the tightening effect was offset to a large extent. The national home price growth index surged to over 10% during the last quarter of 2007 and first quarter of 2008, and a real estate bubble was obvious. However, since the second quarter of 2008, the real estate price growth began to decelerate due to the ongoing global financial crisis and the highly restrictive monetary policy in China. Phase 3. From September 2008 to December 2009: extraordinary expansionary monetary policy to cope with the global financial crisis In order to combat the decrease in exports and economic growth due to the global financial crisis, the PBC implemented expansionary monetary policy which resulted in tremendous expansion of money supply and bank loans. The long-term benchmark bank loan rate was cut five times from 7.83% to 5.94%, and banks were encouraged to extend mortgage loans for first homes at only 70% of the benchmark rate since the fourth quarter of 2008. In addition, the minimum down payment for large first home (above 90 m2) and second home were both lowered by the PBC to channel more credit into the housing sector. As the credit crisis is put to an end, many global investors turned their attention to China to seek long-term growth on their investments. Hot money flows to China reached US$123 billion in the second quarter of 2009, the highest level in history for China. With expansionary monetary policy and tremendous hot money flows, the national home price growth index rebounded swiftly, from − 1.1% in the first quarter of 2009, the lowest point in the past ten years, to 5.8% in the fourth quarter of 2009. Phase 4. From January 2010: tightening monetary policy to control the real estate bubble In order to control the overheating home price and reduce the risk of a real estate bubble, the Chinese State Council proclaimed many critical measures since the beginning of 2010. For instance, the minimum down payment for the second home has been raised gradually to 50%; the mortgage rate for the second home has been raised to 110% of the benchmark bank loan rate; the minimum down payment and mortgage rate have been raised even more dramatically for the third home purchase. In Beijing, the government banned commercial banks from making mortgage loans to the third or more homes. In addition, the central bank began to perform tightening monetary policy, and the reserve ratio has been raised multiple times in 2010. With the initial implementation of tightening monetary policy, the real estate transaction volume dropped remarkably, but the national home price growth index in the first quarter of 2010 still reached 10% over the previous year.

Using quarterly data from 1998:Q1 to 2009:Q4 and monthly data from July 2005 to February 2010, this paper examines the impact of key monetary policy variables, including long-term benchmark bank loan long-term rate, money supply growth, and mortgage credit policy indicator, on the home price growth behavior in China. Empirical results consistently demonstrate that declining interest rates, faster money supply growth and loosening mortgage down payment policy tend to accelerate the subsequent home price growth, while rising interest rates, slower money supply growth and tightening mortgage down payment policy tend to decelerate the subsequent home price growth. We also show that hot money flow does not have significant impact on home price growth beyond its impact on the money supply growth. Finally, stock market return is shown to have a significantly positive effect on the home price growth. While it is impossible for the U.S. central bank to set long-term interest rates or change mortgage down payment requirement for banks, such practices are common in China. As more and more capital flows to China's real estate market, global investors should be mindful of the importance of China's benchmark rate set by the central bank, the growth of money supply, and the changes in mortgage down payment policy in affecting the home price growth dynamics in China. Since the central bank directly controls the commercial banks' benchmark interest rate and credit policy, and the exchange rate system is managed floating, the growth of money supply reflects both the central bank's monetary policy and the hot money flow that is mostly converted to base money. In addition, stock market return tends to help predict the subsequent growth in home price due to the wealth effect and the relatively slow adjustment of the real estate sector to economic fundamentals. As China's real estate price growth continues, global investors have been wary of the potential of a real estate price bubble. The analysis of this paper, while not focused on detecting the presence of a real estate bubble, helps investors in understanding that Chinese government policy actions, as captured by the general monetary policy and mortgage credit policy variables, are key driving forces behind the change of real estate price growth in China.