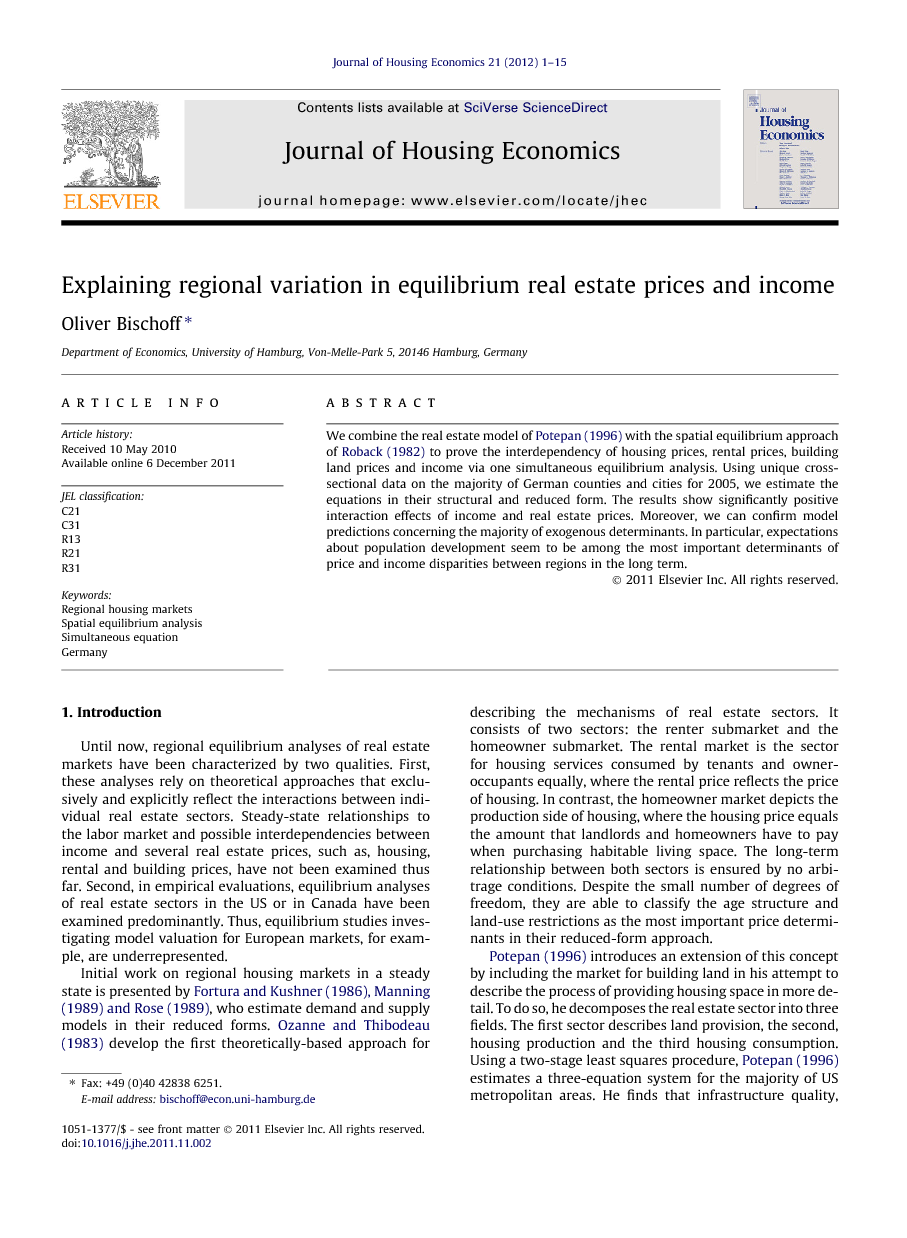 We combine the real estate model of Potepan (1996) with the spatial equilibrium approach of Roback (1982) to prove the interdependency of housing prices, rental prices, building land prices and income via one simultaneous equilibrium analysis. Using unique cross-sectional data on the majority of German counties and cities for 2005, we estimate the equations in their structural and reduced form. The results show significantly positive interaction effects of income and real estate prices. Moreover, we can confirm model predictions concerning the majority of exogenous determinants. In particular, expectations about population development seem to be among the most important determinants of price and income disparities between regions in the long term.

Until now, regional equilibrium analyses of real estate markets have been characterized by two qualities. First, these analyses rely on theoretical approaches that exclusively and explicitly reflect the interactions between individual real estate sectors. Steady-state relationships to the labor market and possible interdependencies between income and several real estate prices, such as, housing, rental and building prices, have not been examined thus far. Second, in empirical evaluations, equilibrium analyses of real estate sectors in the US or in Canada have been examined predominantly. Thus, equilibrium studies investigating model valuation for European markets, for example, are underrepresented. Initial work on regional housing markets in a steady state is presented by Fortura and Kushner, 1986, Manning, 1989 and Rose, 1989, who estimate demand and supply models in their reduced forms. Ozanne and Thibodeau (1983) develop the first theoretically-based approach for describing the mechanisms of real estate sectors. It consists of two sectors: the renter submarket and the homeowner submarket. The rental market is the sector for housing services consumed by tenants and owner-occupants equally, where the rental price reflects the price of housing. In contrast, the homeowner market depicts the production side of housing, where the housing price equals the amount that landlords and homeowners have to pay when purchasing habitable living space. The long-term relationship between both sectors is ensured by no arbitrage conditions. Despite the small number of degrees of freedom, they are able to classify the age structure and land-use restrictions as the most important price determinants in their reduced-form approach. Potepan (1996) introduces an extension of this concept by including the market for building land in his attempt to describe the process of providing housing space in more detail. To do so, he decomposes the real estate sector into three fields. The first sector describes land provision, the second, housing production and the third housing consumption. Using a two-stage least squares procedure, Potepan (1996) estimates a three-equation system for the majority of US metropolitan areas. He finds that infrastructure quality, property taxes, population size and land-use restrictions matter most in explaining regional price disparities. Although this three-equation system represents a complete model, connections to the labor market remain unexplored. According to the spatial equilibrium approach of Roback (1982), household living and firms’ production decisions depend fundamentally on the level of local amenities. Those amenities determine housing environment and house prices, but they also affect production and income. Because the supply of amenities is limited, the market process leads to adjustments in location decisions of households and firms given preferences and production strategies. Therefore, direct and indirect effects of amenities, prices and income become capitalized. With regard to empirical evaluation, the result is no spatial autocorrelation should exist when the market adjustment is completed. In equilibrium, no further arbitrage opportunities exist and market agents at the margin are indifferent across space (Albouy, 2009, Berger et al., 2008, Ebertz and Buettner, 2009, Glaeser and Gottlieb, 2009, Rappaport, 2008 and Winters, 2009).1 However, if competition for the most productive and highest quality location is neglected, the results may be one-sided and biased (Glaeser and Gyourko, 2008). Admittedly, Ozanne and Thibodeau, 1983 and Potepan, 1996 hint at the possible endogeneity of income, but they do not pursue a deeper investigation of this concept. Income is generated by the labor market, which is affected by location decisions according to the spatial equilibrium approach. Market agents, in turn, orient themselves based on real estate prices, income and amenities according to their individual strategy. In sum, from a theoretical point of view, the spatial equilibrium model yields a justification for the interdependent relationship between income and housing prices.2 Because dominantly US data have been used in the research conducted so far, applying the model to another housing market environment provides a method to validate the model. The US market exhibits an owner-occupied rate of approximately 66% (US Census Bureau, 2009). With such a high owner-occupant rate, that specific housing demand is automatically reflected in the price structure. In contrast, housing markets characterized by a more symmetric distribution of preferences could provide new insight into long-term price factors; e.g., in Germany, only approximately 42% of all households are owner-occupied (ECB, 2005). In this paper, we extend the three-equation system of Potepan (1996) with an additional income equation to capture interactions between the real estate market and the labor market in steady state, but also to control for local externalities between regions. For our empirical evaluation, we use cross-sectional data covering approximately 95% of all independent cities and counties in Germany for the year 2005. In the first step, we estimate the four-equation system consisting of housing prices, rental prices, building land prices and income via a three stage least squares regression to clarify the structural relationships at play. In the second step, we estimate the reduced form separately for each equation to detect the total effects of exogenous price determinants. Thereby, regardless of the theoretical setting, which already considers externalities across space, we present additional estimates to account for spatial correlation due to the nature of data to make our findings as robust as possible. The remainder of this paper is organized as follows: Section 2 presents the theoretical background. Section 3 describes the data and the empirical methods. Section 4 discusses the results, first presenting the structural form estimations, followed by the reduced form estimations. Section 5 concludes the paper.

We adopt the equilibrium model of Potepan (1996) to analyze long-run differences in rental prices, housing prices, building land prices and income levels for the overwhelming majority of German counties and independent cities using one closed structural model. We include the spatial equilibrium approach of Roback (1982) to provide theoretical justification for the interdependent relationship between income and real estate prices. We can show that the link between the two models can be found in the market for housing services. Structurally estimating the four-equation system via a three-stage least squares analysis, we find clear evidence to support the extension of our model. The interactions of real estate prices and income are predominantly significant and positive, and thus completely compliant with model predictions. Without specifying income as endogenous as the baseline model does, at least for Germany, we even find a completely diametrical, significantly negative impact of income on housing prices. This finding might suggest that housing is an inferior rather than a normal good. However, in view of the theoretical framework and the empirical outcomes, this result instead indicates an omission of important income determinants. To investigate the total impacts of exogenous factors on prices and income, we also present reduced form results. In addition to pure 2SLS regressions, 2SLS spatial lag models are shown due to the origin nature of data. While the empirical tests confirm the utility of such a procedure, from a theoretical perspective, spatial externalities are already accounted for via the spatial equilibrium model. However, independently from the specific estimation method, expectations about population development in particular exert a positive influence on real estate prices and income. This significance result reveals that regional variation in equilibrium real estate prices depends on agents’ expectations about future market trends. Future research should focus on examining the model in regard to time variation. Because our theoretical approach is specified in real terms, it is possible to verify the framework over time. To ensure robust results, it is important to know how model predictions satisfy the relevant requirements over a longer time span. Here, a closely linked dynamic structural approach might be appropriate. Concentrating entirely on the reduced form occludes the underlying theoretical relationship that is most often the starting point in similar research. Another area for further exploration has to do with our modeling of the labor market. Theoretical and empirical expansion is possible here and, indeed, is necessary to verify the previous model setting.