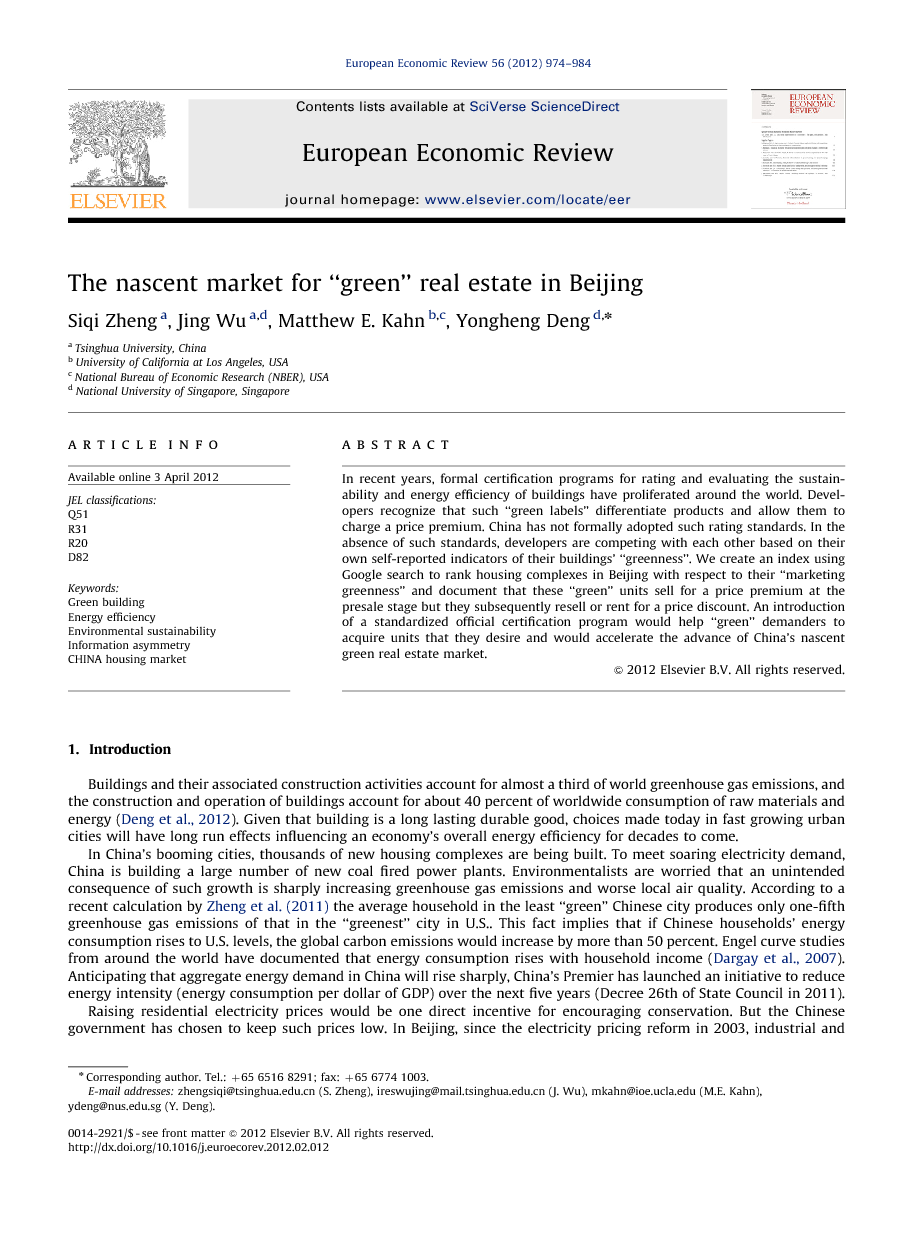 In recent years, formal certification programs for rating and evaluating the sustainability and energy efficiency of buildings have proliferated around the world. Developers recognize that such “green labels” differentiate products and allow them to charge a price premium. China has not formally adopted such rating standards. In the absence of such standards, developers are competing with each other based on their own self-reported indicators of their buildings’ “greenness”. We create an index using Google search to rank housing complexes in Beijing with respect to their “marketing greenness” and document that these “green” units sell for a price premium at the presale stage but they subsequently resell or rent for a price discount. An introduction of a standardized official certification program would help “green” demanders to acquire units that they desire and would accelerate the advance of China’s nascent green real estate market.

As China builds more real estate assets, could a growing share of such new capital be “green”? There are two dimensions of “green” real estate. First a housing complex can be built in a city or a neighborhood within a larger district that has especially good local air quality and has access to ample green space. Residential real estate sells for a higher price in the areas that are objectively greener. A second dimension of real estate “greenness” focuses on a building’s energy efficiency. A growing literature has examined using data from around the world to test whether such real estate commands a price premium. Our new empirical work not only contributes to the literature on the second dimension of real estate “greenness”, it also highlights an information problem that will hinder the growth of Beijing’s nascent green building market. Using Google search, we documented that some real estate developers are actively marketing their new residential complexes with so-called “green” technologies as “green buildings” to presale buyers. All else equal, our empirical estimates highlight that these buildings do sell for a price premium at the presale stage. But, we also document that these “green” properties subsequently resell and rent for a price discount. Our findings of this sign flip corroborate the findings of studies conducted by Chinese engineers who have reported that housing units in the “green buildings” embedded with the technologies such as central air conditioning actually consume more electricity. As this building-specific information is revealed only after the residential building complex is completed and the electricity bill arrives, the units in this complex actually resell and rent for a price discount. We recognize that a limitation of our study is that we cannot extrapolate about the objective “greenness” of future apartment complexes based on the recent past experience. Ideally, the “green” real estate market in China will mature, so that there is a positive correlation between a building’s “marketed greenness” and its objective energy efficiency. The development of green real estate market will be further accelerated if a trusted “green rating” system could be introduced. Consumers who want to buy a “green” housing unit would be able to distinguish “green” from “brown”. Private developers who seek to collect a price premium for building “green” real estate would be required to meet specific building requirements. Government labeling can help to create a trusted system for rating building “greenness”. Furthermore, if the population of environmentalists in China’s cities is willing to vote their pocketbook and is able to identify objectively “green” real estate, then for profit developers will have an incentive to supply such real estate and the nascent true green building market will emerge.