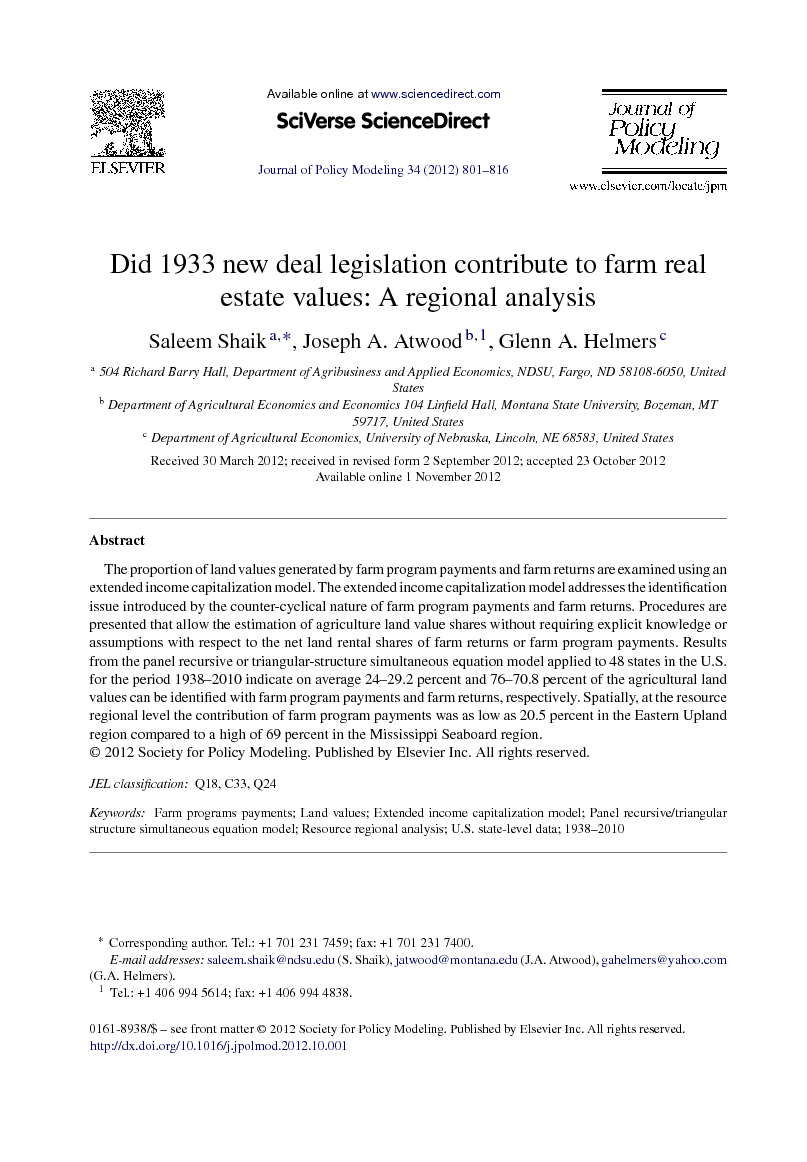 The role farm program payments play in altering the structure of U.S. agriculture with specific reference to agriculture land value is investigated in this paper. This research is unique in the sense that it uses historical U.S. state level data from 1938 to 2010 to examine the effect of farm program payments and farm returns on value of land across nine resource regions and the U.S. With respect to methodology, procedures are presented that allow the estimation of agriculture land value shares without requiring explicit knowledge or assumptions with respect to the net land rental share of farm returns or farm program payments. A recursive estimation procedure is presented that addresses the identification issue introduced by the counter-cyclical nature of farm program payments and farm returns. Two-way random effects panel econometric procedures that account for spatial and temporal variation have been used to estimate the extended income capitalization land value model. Results from the panel recursive or triangular-structure simultaneous equation model applied to 48 states in the U.S. for the period 1938 to 2010 indicate on average 24–29.2 percent and 76–70.8 percent of the agricultural land value can be identified with farm program payments and farm returns, respectively. The regional analysis indicates the contribution of the farm program payments to agriculture land value varied substantially by region. The contribution of farm program payments was as low as 20.5 percent in Eastern Upland region compared to a high of 69 percent in the Mississippi Seaboard region. Regional differences in the contribution of farm program payments might be due to the differences in the agricultural production systems and also due to non-availability of program payments for certain crops or livestock production or lower acreage program crops. The Agriculture Reform, Food and Jobs Act of 2012 represents potentially significant changes in agricultural policies that have included the production controls and price support mechanism's introduced in the 30s, 40s, and mid 50s; the soil conservation and acreage diversion policies of the 60s, 70s, and mid-80s, and the lower commodity price and income support decoupling policies of mid 80s, 90s, and 2000. The 2012 farm bill would end direct payments, streamline and consolidate programs, and reduce the deficit by $23 billion. The farm bill discussions have been somewhat contentious with strong differences in policy preferences not only between political parties and between the house and senate versions but also across regions and producer groups. The sometimes heated nature of the policy debates between regional and crop specific groups is not surprising given the results of this paper. The different regional effects of these policies in general and upon farm land value in particular would indicate some regions could be more adversely and severely affected than others by the proposed reductions in farm program payments given that that farm land and buildings comprise approximately 80 percent of farm assets. This research has several policy implications. First, the result of the study suggests the contributions of the farm program payments to land values varied substantially by region. Due to the differential estimated effect of farm program payments upon land value across regions, it is not surprising that producer groups and congressman from some regions have so strongly opposed provisions that reduce the relatively high transfer payments currently being funneled into their regions. Based on data from 48 states in the U.S. for the period 1938–2010, the contribution of farm program payments ranged from 23 to 70 percent across regions with the larger estimated effect (over a 50% farm program payment agricultural use share) occurring in the Southern Plains and the Mississippi Seaboard regions perhaps explaining why groups from these regions have so strongly opposed significant reforms while groups from the Heartlands and other regions have less stridently opposed the reform. Indeed, given the results of this study, it is likely that substantial cost reductions in the farm program would disproportionately affect the Southern Plains and Mississippi Seaboard regions while having less painful effects upon the crop producing regions of the Midwest. Secondly, the mixed signs on the farm returns variable in the farm program payment equation suggest the counter cyclic nature of farm program payments and farm returns is not consistent across all the resource regions. This indicates that not all farm program payments are paid when the producers are faced with risky situations or needs. Finally, our results do not quantify changes in the share of contribution of farm program payments to the value of land over time. This would be a potentially valuable and fruitful research topic although the lack of historical data on the effect of region specific changes in different types of farm policies may make it difficult to quantify the contribution of the different policies on land value across size groups, commodities, and regions. A related complication is that the total effect of historical agricultural policy cannot be directly assessed by examining farm program payments. A recent example would be the U.S. renewable fuels mandate which is largely credited with causing the recent years’ spike in crop prices that have been followed by substantial increases in agricultural land value. In this case the approach of this paper would have attributed much of the recent increase in real land price to increases in expected farm crop receipts rather than occurring as a result of governmental policy.