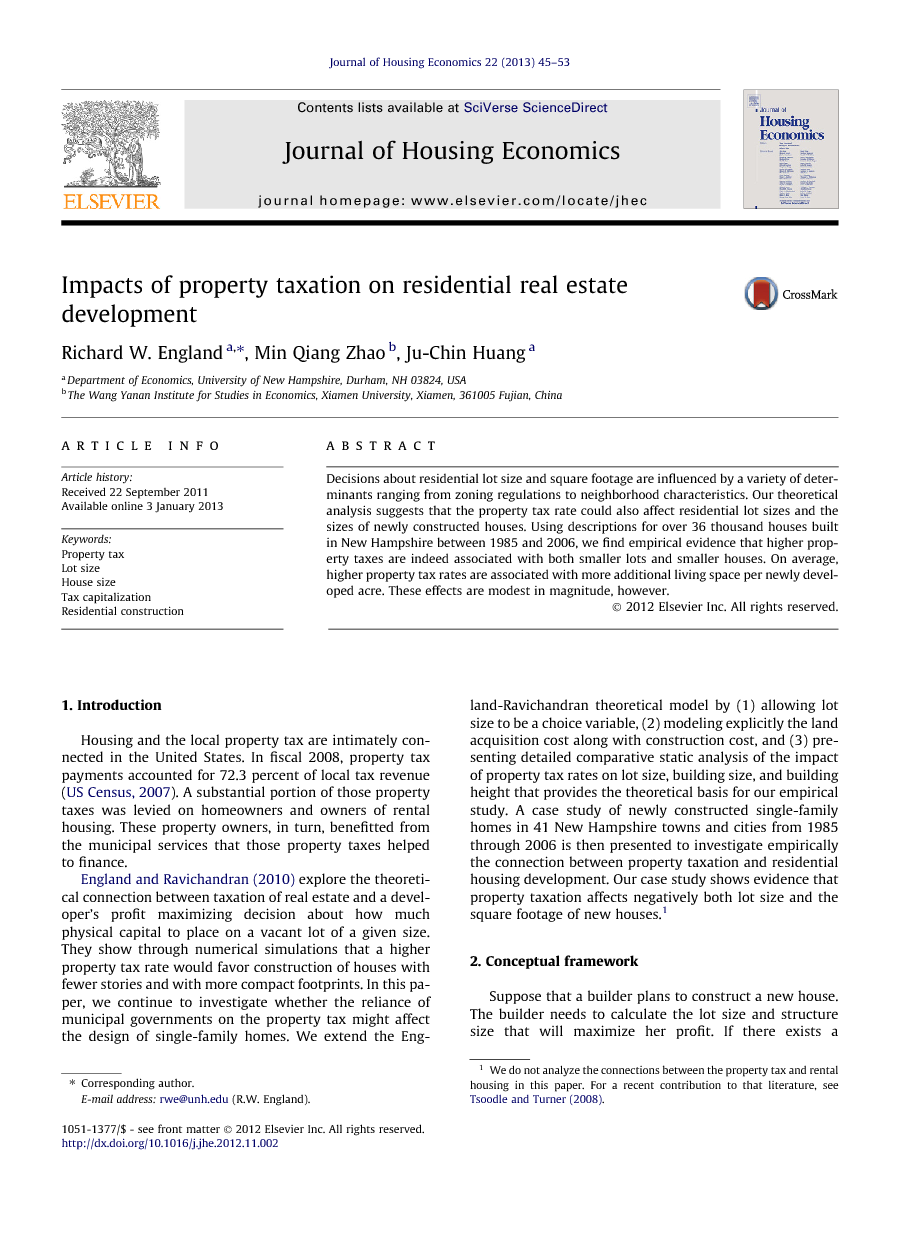 Decisions about residential lot size and square footage are influenced by a variety of determinants ranging from zoning regulations to neighborhood characteristics. Our theoretical analysis suggests that the property tax rate could also affect residential lot sizes and the sizes of newly constructed houses. Using descriptions for over 36 thousand houses built in New Hampshire between 1985 and 2006, we find empirical evidence that higher property taxes are indeed associated with both smaller lots and smaller houses. On average, higher property tax rates are associated with more additional living space per newly developed acre. These effects are modest in magnitude, however.

Housing and the local property tax are intimately connected in the United States. In fiscal 2008, property tax payments accounted for 72.3 percent of local tax revenue (US Census, 2007). A substantial portion of those property taxes was levied on homeowners and owners of rental housing. These property owners, in turn, benefitted from the municipal services that those property taxes helped to finance. England and Ravichandran (2010) explore the theoretical connection between taxation of real estate and a developer’s profit maximizing decision about how much physical capital to place on a vacant lot of a given size. They show through numerical simulations that a higher property tax rate would favor construction of houses with fewer stories and with more compact footprints. In this paper, we continue to investigate whether the reliance of municipal governments on the property tax might affect the design of single-family homes. We extend the England-Ravichandran theoretical model by (1) allowing lot size to be a choice variable, (2) modeling explicitly the land acquisition cost along with construction cost, and (3) presenting detailed comparative static analysis of the impact of property tax rates on lot size, building size, and building height that provides the theoretical basis for our empirical study. A case study of newly constructed single-family homes in 41 New Hampshire towns and cities from 1985 through 2006 is then presented to investigate empirically the connection between property taxation and residential housing development. Our case study shows evidence that property taxation affects negatively both lot size and the square footage of new houses.1

In Model 1, we correlate the three physical dimensions of newly constructed homes with lagged values of the property tax rate and real per pupil expenditure for our entire sample of New Hampshire localities. In Table 2, we see that higher property tax rates are associated with smaller lot sizes, suggesting that property tax is not a pure benefit tax in the New Hampshire land market. Note that heavier property taxation is also significantly associated with the construction of homes with fewer stories and less living space, a result consistent with the view that, on net, the local property tax discourages capital investment. We also find evidence in Model 1 that higher levels of real per pupil expenditure encourage building structures with more stories and more living space but smaller lot size. The control variables for per capita income, zoning, location, and amenities are significant and their coefficients have the expected signs. In general, as shown in Model 1, an improvement in positive surrounding characteristics or a reduction in the negative surrounding characteristics favors construction of taller building, which is consistent with the prediction of our analytical model. In addition, Model 1 reveals a generally negative relationship between lot size and positive surrounding characteristics. According to our analytical model, land values must have increased more than the unit rent of housing services for better surrounding characteristics to be associated with a smaller lot size. In Model 2, we pursue the earlier finding of Lutz (2009) that the effects of local taxation differ substantially by location within New Hampshire. More specifically, we split our sample into those southern towns and cities that are less than fifty miles from Boston and those that are more remote from the region’s largest city. As shown in Table 2, higher tax rates are associated with smaller lot size, smaller living areas and fewer stories of height in both subsamples of localities. This negative association is larger in northern towns and cities. Note that Model 2 implies a partial correlation of lot size and the tax rate that differs substantially between the immediate exurbs of Boston and more northerly communities. Lutz (2009) speculates that localities closer to Boston have tighter zoning regulations and fewer buildable lots, a situation that would result in a lower supply elasticity for residential land in those communities. Although our Model 2 attempts to control for land scarcity and for the presence of zoning in the year of construction, our measures are far from perfect. We suspect that the southern towns, where zoning regulations have typically been in effect for more years than in the north (see the summary statistics in Table 1), have stricter zoning provisions and tougher enforcement of those land use regulations. Hence, we are not surprised that Model 2 implies a much stronger negative association of the property tax with lot size in the north of New Hampshire than in the south. This result suggests that the design of new residential properties is less sensitive to property taxation in communities closer to Boston. What impact does property taxation seem to have on the capital intensity of newly built single family homes? We tackle that question by calculating the elasticities of lot size, living area and building height with respect to the property tax rate at the variable means for each of our empirical models. As reported in Table 3, Model 1 predicts that a ten percent increase in the tax rate would be associated with a 1.8 percent decline in living space and a 4.0 percent decrease in lot size. That is, our simplest empirical model predicts that a ten percent tax hike would increase the floor-area ratio of the average new home by about 2.2 percent. Although this predicted impact is modest in magnitude, statistical significance tests confirm that this impact really exists.Based on Model 2, we find that sorting our study towns into northern and southern piles makes a large difference. In the southern communities, a ten-percent hike in the tax rate tends to reduce living space by nearly 1.6 percent and decrease lot size by more than 2.4 percent. This implies an increase in the floor-area ratio of 0.8 percent associated with a ten-percent tax hike. In sharp contrast with the communities closer to Boston, northern towns and cities are predicted to experience a drop in lot size of 4.3 percent and a shrinkage in living area of 1.8 percent for newly constructed houses in reaction to a ten-percent hike in the property tax rate. This suggests an increase in the floor-area ratio equal to roughly 2.5 percent. As with many other facets of the real estate market, location seems to matter greatly as one assesses the impact of property taxation on building decisions.19