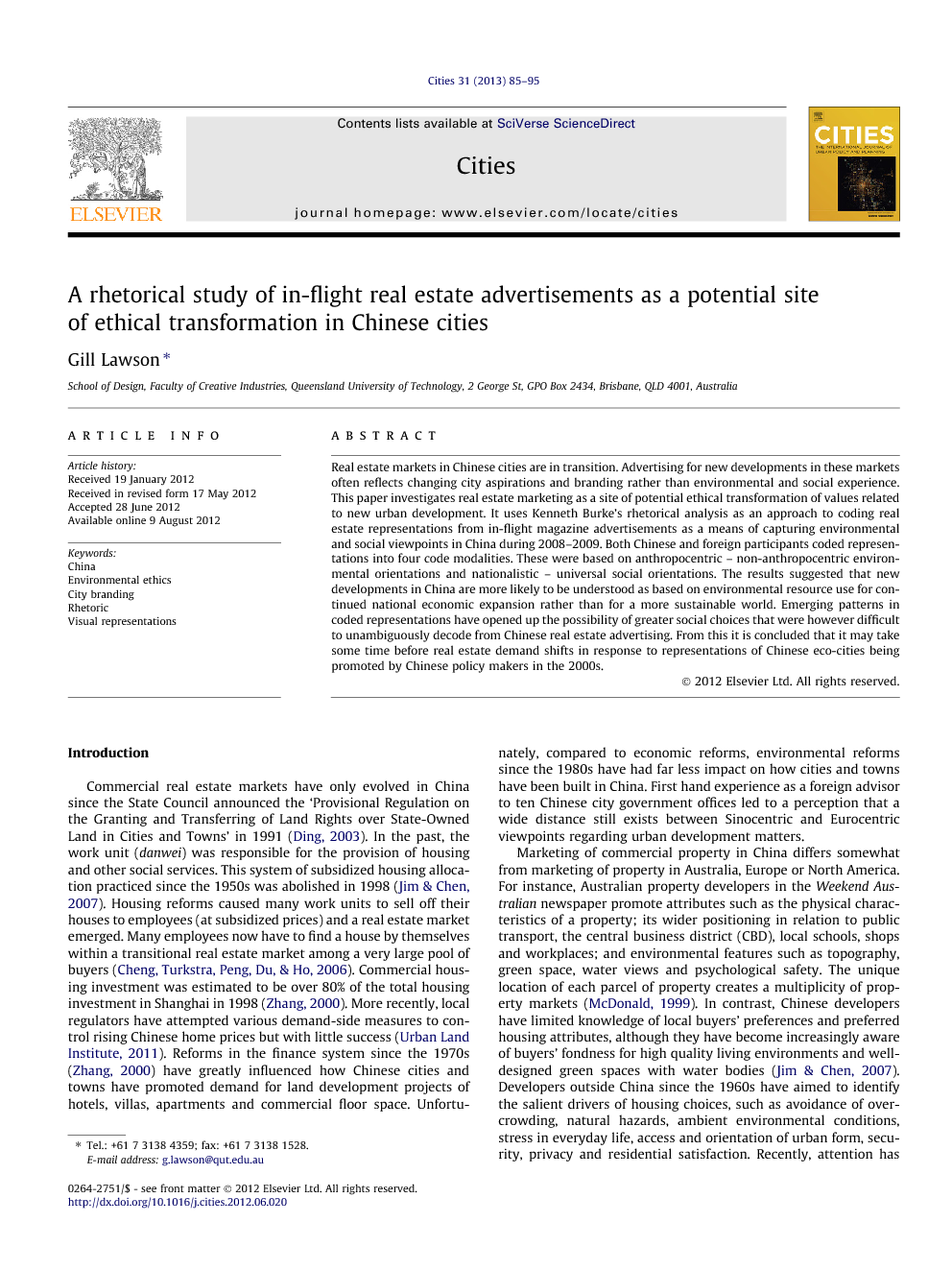 Real estate markets in Chinese cities are in transition. Advertising for new developments in these markets often reflects changing city aspirations and branding rather than environmental and social experience. This paper investigates real estate marketing as a site of potential ethical transformation of values related to new urban development. It uses Kenneth Burke’s rhetorical analysis as an approach to coding real estate representations from in-flight magazine advertisements as a means of capturing environmental and social viewpoints in China during 2008–2009. Both Chinese and foreign participants coded representations into four code modalities. These were based on anthropocentric – non-anthropocentric environmental orientations and nationalistic – universal social orientations. The results suggested that new developments in China are more likely to be understood as based on environmental resource use for continued national economic expansion rather than for a more sustainable world. Emerging patterns in coded representations have opened up the possibility of greater social choices that were however difficult to unambiguously decode from Chinese real estate advertising. From this it is concluded that it may take some time before real estate demand shifts in response to representations of Chinese eco-cities being promoted by Chinese policy makers in the 2000s.

Commercial real estate markets have only evolved in China since the State Council announced the ‘Provisional Regulation on the Granting and Transferring of Land Rights over State-Owned Land in Cities and Towns’ in 1991 (Ding, 2003). In the past, the work unit (danwei) was responsible for the provision of housing and other social services. This system of subsidized housing allocation practiced since the 1950s was abolished in 1998 (Jim & Chen, 2007). Housing reforms caused many work units to sell off their houses to employees (at subsidized prices) and a real estate market emerged. Many employees now have to find a house by themselves within a transitional real estate market among a very large pool of buyers (Cheng, Turkstra, Peng, Du, & Ho, 2006). Commercial housing investment was estimated to be over 80% of the total housing investment in Shanghai in 1998 (Zhang, 2000). More recently, local regulators have attempted various demand-side measures to control rising Chinese home prices but with little success (Urban Land Institute, 2011). Reforms in the finance system since the 1970s (Zhang, 2000) have greatly influenced how Chinese cities and towns have promoted demand for land development projects of hotels, villas, apartments and commercial floor space. Unfortunately, compared to economic reforms, environmental reforms since the 1980s have had far less impact on how cities and towns have been built in China. First hand experience as a foreign advisor to ten Chinese city government offices led to a perception that a wide distance still exists between Sinocentric and Eurocentric viewpoints regarding urban development matters. Marketing of commercial property in China differs somewhat from marketing of property in Australia, Europe or North America. For instance, Australian property developers in the Weekend Australian newspaper promote attributes such as the physical characteristics of a property; its wider positioning in relation to public transport, the central business district (CBD), local schools, shops and workplaces; and environmental features such as topography, green space, water views and psychological safety. The unique location of each parcel of property creates a multiplicity of property markets (McDonald, 1999). In contrast, Chinese developers have limited knowledge of local buyers’ preferences and preferred housing attributes, although they have become increasingly aware of buyers’ fondness for high quality living environments and well-designed green spaces with water bodies (Jim & Chen, 2007). Developers outside China since the 1960s have aimed to identify the salient drivers of housing choices, such as avoidance of overcrowding, natural hazards, ambient environmental conditions, stress in everyday life, access and orientation of urban form, security, privacy and residential satisfaction. Recently, attention has been drawn towards factors that make a location attractive to a person or family ‘on the move’, including low crime, high environmental quality, opportunities for good health and longevity, social tolerance, racial harmony, high usability of technology and accessible local amenities (McCann, 2004). Marketing of new zero-carbon cities and towns in the West is an emerging field of interest. In China, this field seems to be coalescing around the concept of eco-cities, heavily promoted by Chinese governments ( Larson, 2009 and Yip, 2008). This begs the question of whether real estate advertisements have any influence on the demand-side response to low carbon policies in China.

This paper aimed to investigate Chinese real estate promotion as a site of potential ethical transformation in values surrounding urban development. It outlined a methodology that extended the use of Kenneth Burke’s concept of symbolic action and rhetorical analysis (Burke, 1969) into the realm of real estate advertisements as persuasive representations of aspirational environmental and social viewpoints in China. This approach sought to reveal how Chinese and foreign readers of in-flight magazines interpreted real estate advertisements according to different ethical modalities. As significant environmental and social events occurred in China from 2008 to 2010, it was possible that visual representations of model urban developments would reveal an ethical shift in values. Findings from this work showed that developments in coastal areas, particularly Shanghai, Beijing and Hainan Island, dominated real estate advertisements at this time. Commercial/mixed use development were the most common, followed by villa developments and then apartment projects. In May 2008, the most frequent message understood by readers involved urban developments that used environmental resources for continued national economic expansion (top – right quadrant). By December 2009, this pattern had changed to a loose concentration of urban developments that used environmental resources for cosmopolitan or universal lifestyle choices (bottom – right quadrant). This evidence pointed to a potential transformation of social viewpoints, rather than environmental viewpoints, that may be emerging in transitional real estate markets in the next decade in China. This paper has introduced an alternative approach to understanding the demand for Chinese real estate through the symbolic nature of new urban places in China. It has provided tentative insights into the persuasive qualities of real estate advertisements as reflections of Chinese and foreign ethical positions regarding new urban developments. It predicts a potential change towards a more diverse set of anthropocentric national and universal values in real estate investment in Chinese cities but it may take some time before real estate demand shifts in response to representations of Chinese eco-cities being promoted by Chinese policy makers in the 2000s.