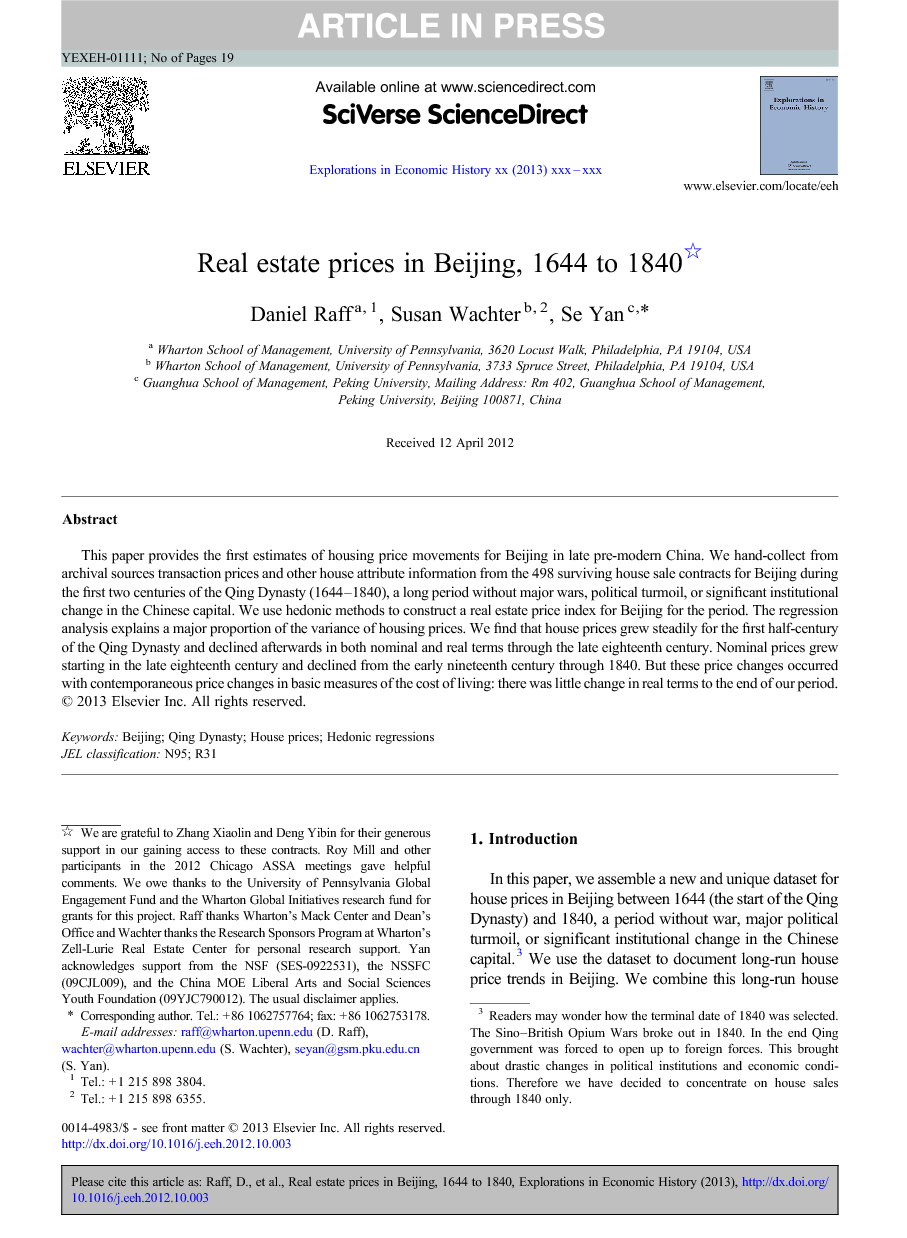 This paper provides the first estimates of housing price movements for Beijing in late pre-modern China. We hand-collect from archival sources transaction prices and other house attribute information from the 498 surviving house sale contracts for Beijing during the first two centuries of the Qing Dynasty (1644–1840), a long period without major wars, political turmoil, or significant institutional change in the Chinese capital. We use hedonic methods to construct a real estate price index for Beijing for the period. The regression analysis explains a major proportion of the variance of housing prices. We find that house prices grew steadily for the first half-century of the Qing Dynasty and declined afterwards in both nominal and real terms through the late eighteenth century. Nominal prices grew starting in the late eighteenth century and declined from the early nineteenth century through 1840. But these price changes occurred with contemporaneous price changes in basic measures of the cost of living: there was little change in real terms to the end of our period

With 498 surviving real estate transactions contracts, we use hedonic regression methods to estimate a long-run house price index for Beijing between 1645 and 1840. We are able to explain a large amount of the variation in housing prices by the characteristics of the properties, including the number of rooms and location. We also create rice- and more broadly based consumer price indices. We compare the house price index results with these series and estimate real house price series. We find that real house prices increased in the second half of the seventeenth century, declined in the first half of the eighteenth century, and then remained relatively constant in real terms. We are in this study limited in our data over this approximately 200 year period and thus we estimate values at intervals of 25 years. Nonetheless the observations we do have for the second half of the seventeenth century indicate that price increases are consistent with the rapidly growing economy and urbanization that historians have attributed to the period. The decline of house prices that we observe in the first half of the eighteenth century is consistent with a government policy change that allowed the construction of new homes and deregulated housing markets. We briefly compare house prices in the Qing Dynasty with prices in 2002 and in 2012. It is well known that house prices increased dramatically between 2002 and 2011. Even in 2002, prior to the run-up, we see that prices appear to have increased between 1840 and 2002. While this increase raises questions about more recent price trends, our results for the period 1644 to 1840 are consistent with the findings in Shiller (2005) and Eichholtz (1997) which show no significant price increase in real terms, for 150 years in Shiller and for nearly 350 years in Eichholtz.