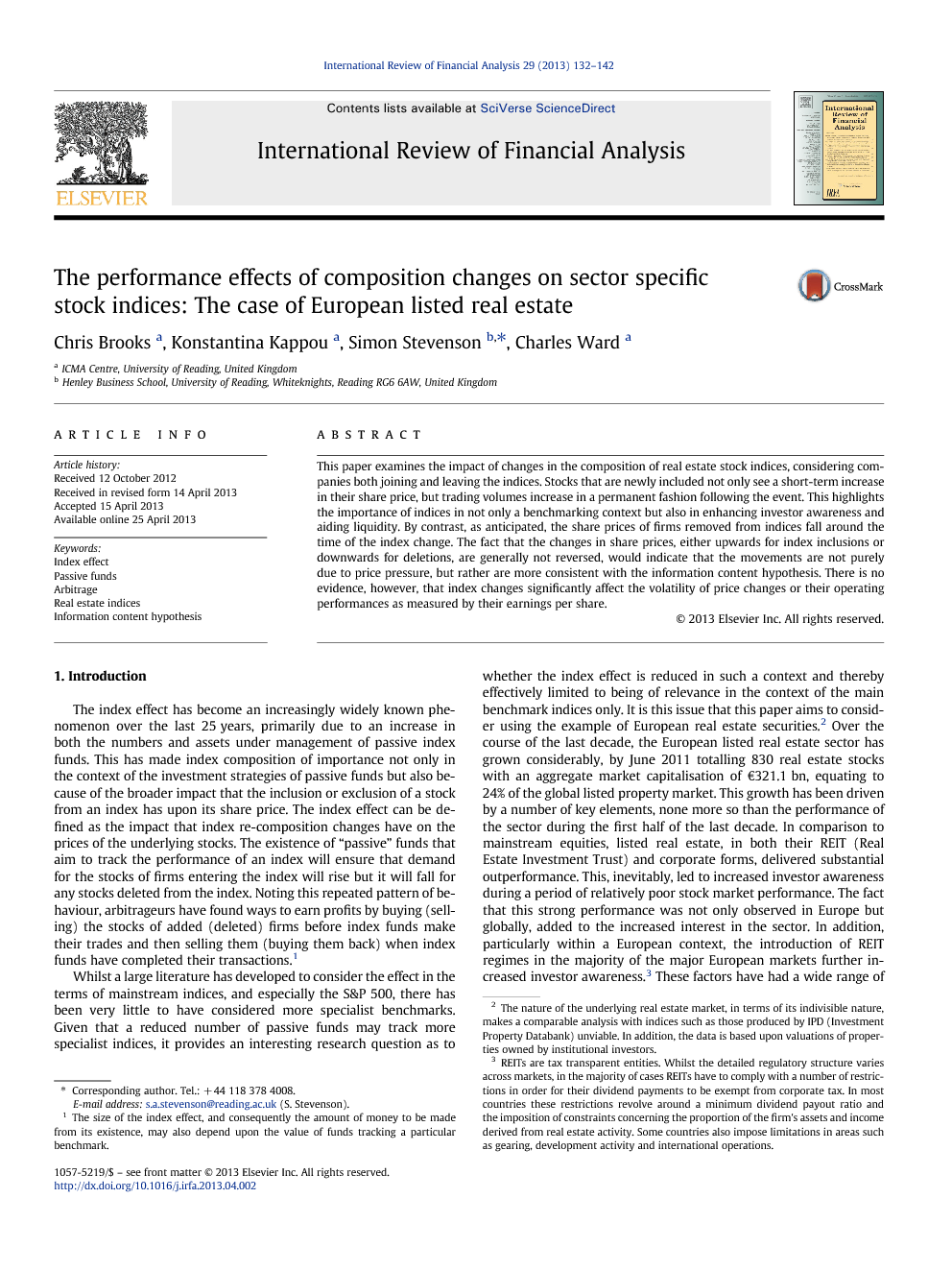 This paper examines the impact of changes in the composition of real estate stock indices, considering companies both joining and leaving the indices. Stocks that are newly included not only see a short-term increase in their share price, but trading volumes increase in a permanent fashion following the event. This highlights the importance of indices in not only a benchmarking context but also in enhancing investor awareness and aiding liquidity. By contrast, as anticipated, the share prices of firms removed from indices fall around the time of the index change. The fact that the changes in share prices, either upwards for index inclusions or downwards for deletions, are generally not reversed, would indicate that the movements are not purely due to price pressure, but rather are more consistent with the information content hypothesis. There is no evidence, however, that index changes significantly affect the volatility of price changes or their operating performances as measured by their earnings per share.

The index effect has become an increasingly widely known phenomenon over the last 25 years, primarily due to an increase in both the numbers and assets under management of passive index funds. This has made index composition of importance not only in the context of the investment strategies of passive funds but also because of the broader impact that the inclusion or exclusion of a stock from an index has upon its share price. The index effect can be defined as the impact that index re-composition changes have on the prices of the underlying stocks. The existence of “passive” funds that aim to track the performance of an index will ensure that demand for the stocks of firms entering the index will rise but it will fall for any stocks deleted from the index. Noting this repeated pattern of behaviour, arbitrageurs have found ways to earn profits by buying (selling) the stocks of added (deleted) firms before index funds make their trades and then selling them (buying them back) when index funds have completed their transactions.1 Whilst a large literature has developed to consider the effect in the terms of mainstream indices, and especially the S&P 500, there has been very little to have considered more specialist benchmarks. Given that a reduced number of passive funds may track more specialist indices, it provides an interesting research question as to whether the index effect is reduced in such a context and thereby effectively limited to being of relevance in the context of the main benchmark indices only. It is this issue that this paper aims to consider using the example of European real estate securities.2 Over the course of the last decade, the European listed real estate sector has grown considerably, by June 2011 totalling 830 real estate stocks with an aggregate market capitalisation of €321.1 bn, equating to 24% of the global listed property market. This growth has been driven by a number of key elements, none more so than the performance of the sector during the first half of the last decade. In comparison to mainstream equities, listed real estate, in both their REIT (Real Estate Investment Trust) and corporate forms, delivered substantial outperformance. This, inevitably, led to increased investor awareness during a period of relatively poor stock market performance. The fact that this strong performance was not only observed in Europe but globally, added to the increased interest in the sector. In addition, particularly within a European context, the introduction of REIT regimes in the majority of the major European markets further increased investor awareness.3 These factors have had a wide range of impacts, including increased trading volumes and, key in the context of this study, an increase in dedicated funds. Enhanced awareness of allocations held to real estate securities have therefore also led to an increase in the visibility and importance of dedicated real estate security indices. Whilst obviously the primary purpose of such indices is their use in a benchmarking context, other factors also come into play. For example, in October 2007 NYSE-LIFFE-Euronext introduced two index futures contracts based upon the FTSE ERPA/NAREIT Europe and FTSE EPRA/NAREIT Eurozone indices (Lee, Stevenson, & Lee, forthcoming). This paper therefore expands upon the limited literature to have considered the index effect in the context of sector specific indices. Even in the context of listed real estate there is a marked lack of existing empirical evidence, and in addition, these papers have solely considered the US REIT market. Ambrose, Lee, and Peek (2006) considered the impact of the change in policy in 2001 that facilitated the inclusion of REITs into mainstream S&P indices. However, the primary focus of the study was the longer term impact on REITs and specifically their relationship with the overall market. The study provided evidence that the beta of those REITs included in the S&P 500 saw a significant upward movement, indicating increased co-movement with the overall market. Furthermore, the beta of indexed REITs with reference to a portfolio of non-indexed REITs showed virtually no change. Additional examination showed that the beta of non-index REITs also increased significantly with respect to the S&P 500. This would imply a sector-wide impact and not one limited to those specific firms included in the S&P indices. The study of Feng, Ghosh, and Sirmans (2006) is of more direct relevance and broadly follows the methodological framework adopted in the mainstream finance literature. The paper considers the price impact of additions and deletions of REITs into the dedicated S&P REIT Index. The results reveal a small yet significant price response to index inclusions. This is of interest given that the index considered is sector specific. However, whilst a significant price response is observed, no such findings are reported with respect to trading volume or institutional investment. This paper considers a number of key research issues, focusing on the EPRA (European Public Real Estate) family of indices.4 Firstly, we examine the impact of index composition changes in the short-run. This analysis considers the impact of changes in the constituents on not only the stock prices of the affected firms but also their trading volume and volatility. A key element in this analysis is testing for any asymmetrical impacts with respect to any possible differential response for index inclusions and deletions. The paper also considers whether there is evidence of a size effect, the impact on operating performance and if the response differs across markets. Finally, we consider the long-run impact of index changes. The remainder of the paper is organised as follows. Section 2 briefly reviews the theory and hypotheses that underlie the body of empirical work to have examined the index effect. Section 3 describes the data and methodological framework adopted in the study. Section 4 presents and analyses the results, whilst Section 5 summarises and offers some concluding comments.

This paper has added to the literature examining the impact of firms entering and leaving benchmark indices. Where this paper differs from extant studies is through the consideration of multiple indices, in this case the FTSE-EPRA NAREIT family of indices. Our study constitutes one of only a handful to examine sector-specific indices rather than those that are market-wide. We examine the effect on prices, trading volumes, volatilities and operating performance in the short- and longer-terms. Our key finding is that the prices of newly included companies rise, and those of deleted firms fall, around the time of the index changes. We also conclude that index inclusion has a long-lasting, even permanent, effect upon trading volumes. However, there is also evidence of arbitrage activity and/or tracker fund purchases of additions and sales of deletions around the time of index re-compositions. There is no evidence, however, that index changes significantly affect the volatility of price changes or firm operating performance as measured by their earnings per share. Returning to the hypotheses that we outlined at the beginning of the paper, we could argue that since the price increases for additions and the falls that occur for deletions appear to be largely permanent and are not subsequently reversed, this finding lends weight to the information content hypothesis. That the price changes around index re-compositions are not temporary effectively rules out the price pressure hypothesis. The results on volumes, where they rise substantially around the time of the event but never subsequently return to their pre-event values is also supportive of the liquidity hypothesis where index membership increases liquidity through enhanced trading activity that arises as a result of heightened investor awareness of specific firms that enter the media spotlight following the announcement of either an addition or a deletion.