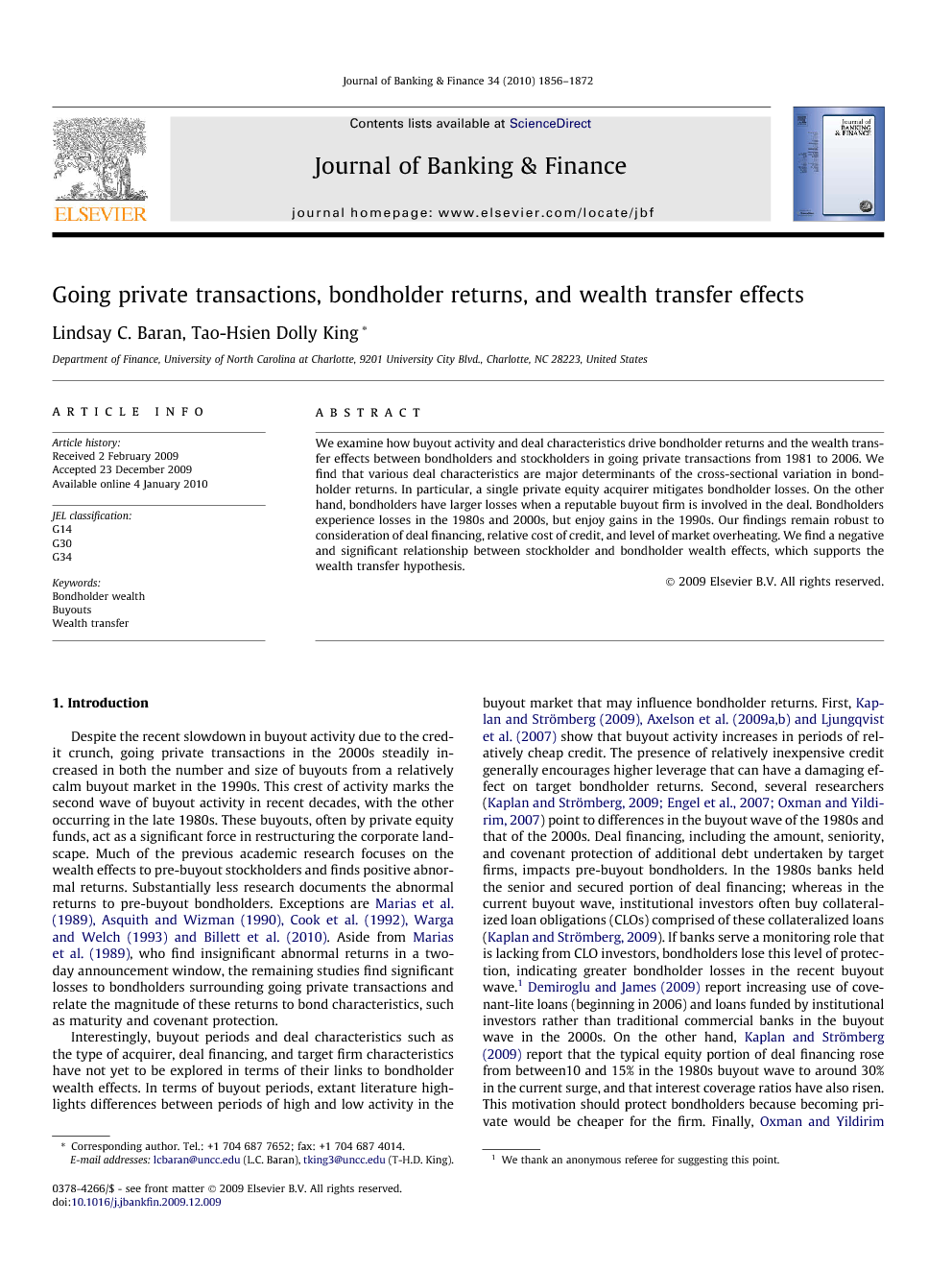 We examine how buyout activity and deal characteristics drive bondholder returns and the wealth transfer effects between bondholders and stockholders in going private transactions from 1981 to 2006. We find that various deal characteristics are major determinants of the cross-sectional variation in bondholder returns. In particular, a single private equity acquirer mitigates bondholder losses. On the other hand, bondholders have larger losses when a reputable buyout firm is involved in the deal. Bondholders experience losses in the 1980s and 2000s, but enjoy gains in the 1990s. Our findings remain robust to consideration of deal financing, relative cost of credit, and level of market overheating. We find a negative and significant relationship between stockholder and bondholder wealth effects, which supports the wealth transfer hypothesis.

In this study, we examine bondholder wealth effects and confirm the wealth transfer effects from bondholders to stockholders in going private transactions from 1981 to 2006. Our study extends the literature on bondholder reactions to going private announcements by examining deal characteristics previously unexamined in the literature. Consistent with Asquith and Wizman, 1990, Warga and Welch, 1993 and Cook et al., 1992, we find that pre-buyout bondholders experience significant losses at going private announcements. We show that certain deal and acquirer characteristics as well as buyout market activity are major determinants of bondholder wealth effects. We examine how the various deal and acquirer characteristics affect bondholder, stockholder, and total firm wealth effects in a multivariate framework. Our macro variables control for the potential influence of differences in the relative cost of financing the buyout, the buyout market conditions, and market deal premium. In particular, we confirm that the bondholders enjoy higher returns when there is a single PE acquirer or when the deal is a divestiture. On the other hand, bondholders experience lower returns when the acquirer is a reputable buyout firm. Bondholders of senior debt, debt with low ratings, or bonds with a large amount outstanding experience larger losses. Change of control covenant is only effective in quelling negative returns when the bond trades at a discount. Returns to stockholders and total firm returns are greater when firms have higher risk measured by unlevered stock volatility. When deal financing is included to examine bondholder returns, we find general confirmation of the multivariate results. Finally, we find support for wealth transfer effects from bondholders to stockholders in going private transactions. We find that correlation between stockholder and bondholder dollar gains and losses is significantly negative in the full sample and in the two buyout waves. Given the gap in the magnitude of dollar gains/losses between bondholders and stockholders, this result indicates that while wealth transfer cannot account for all of stockholder gains, bondholder expropriation helps explain a portion of the stockholder gains at going private transactions. In addition, in the multivariate analysis, scaled debt gains and losses are negatively related to scaled equity gains and losses after controlling for other deal and bond characteristics in the buyout. Our results provide evidence that wealth transfer is one important source for stockholder gains in going private transactions.