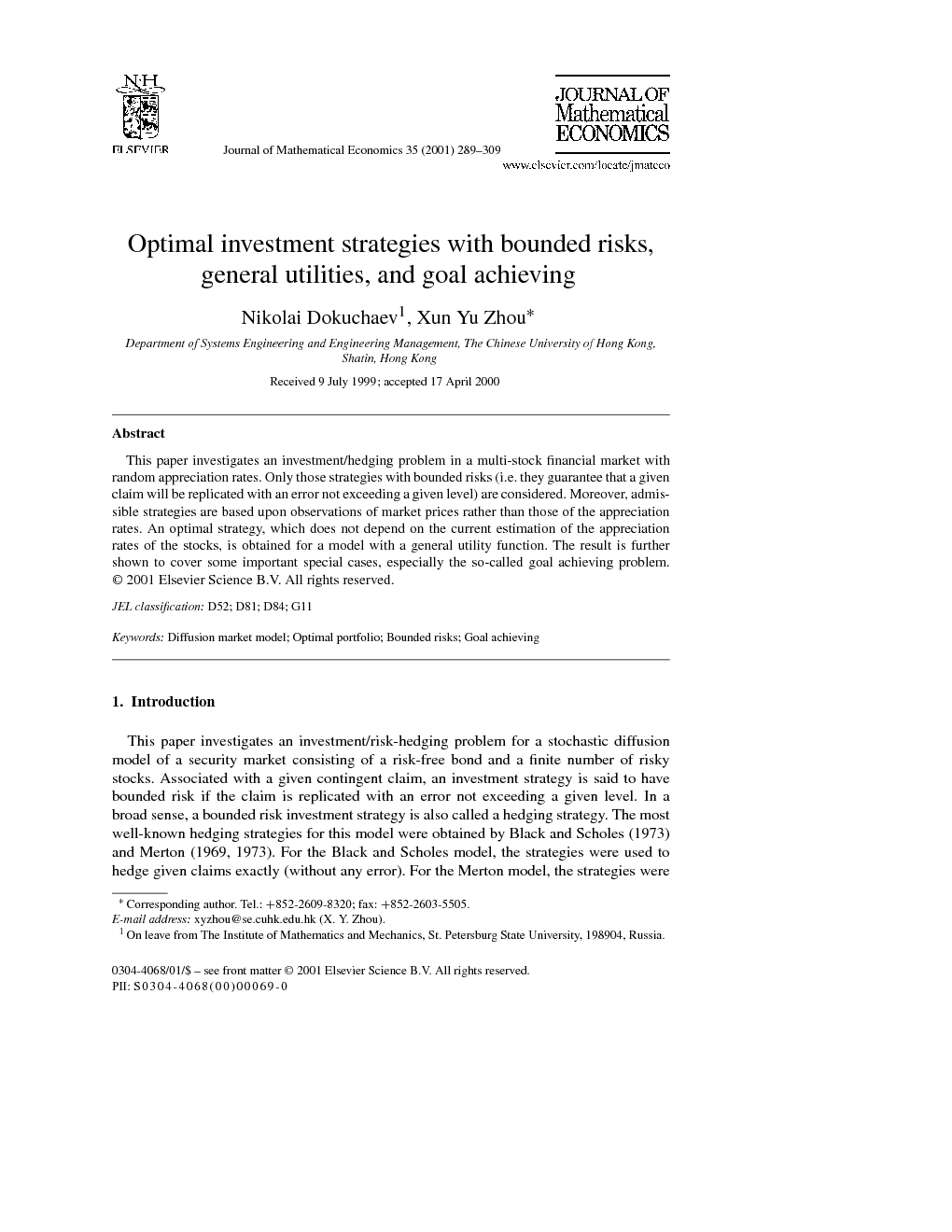 This paper investigates an investment/hedging problem in a multi-stock financial market with random appreciation rates. Only those strategies with bounded risks (i.e. they guarantee that a given claim will be replicated with an error not exceeding a given level) are considered. Moreover, admissible strategies are based upon observations of market prices rather than those of the appreciation rates. An optimal strategy, which does not depend on the current estimation of the appreciation rates of the stocks, is obtained for a model with a general utility function. The result is further shown to cover some important special cases, especially the so-called goal achieving problem. © 2001 Elsevier Science B.V. All rights reserved.

This paper investigates an investment/risk-hedging problem for a stochastic diffusion model of a security market consisting of a risk-free bond and a finite number of risky stocks. Associated with a given contingent claim, an investment strategy is said to have bounded risk if the claim is replicated with an error not exceeding a given level. In a broad sense, a bounded risk investment strategy is also called a hedging strategy. The most well-known hedging strategies for this model were obtained by Black and Scholes (1973) and Merton (1969, 1973). For the Black and Scholes model, the strategies were used to hedge given claims exactly (without any error). For the Merton model, the strategies were obtained for an optimization problem of maximizingEU(X(T)), where X(T) is the wealth at the expiration time T and U() is a utility function. For various variants and extensions, see, e.g. Samuelson (1969), Hakansson (1971), Perold (1984), Karatzas et al. (1987), Dumas and Liucinao (1991), Zhou (1998), and Khanna and Kulldorff (1999). However, in the literature explicit formulae for optimal strategies have been established only for the cases when appreciation rates of the stocks are non-random and known, and U() has quadratic form, log form or power form. In the general case of random appreciation rates, solution of the optimal investment problem calls for using the so-called backward stochastic differential equations (for a most updated account of this theory see Chapter 7 ofYong and Zhou (1999)), which unfortunately is difficult to solve explicitly and computationally. Another problem of wide interest is a mean–variance hedging, or a problem of minimizing EjX.T / −  j2, where  is a given random claim. For this problem, explicit solutions were obtained for the case of observable appreciation rates, see, e.g. Föllmer and Sondermann (1986), Duffie and Richardson (1991), Pham et al. (1998), Kohlmann and Zhou (1998), Pham et al. (1998), and Laurent and Pham (1999). The resulting optimal hedging strategies are combinations of the Merton strategy and the Black and Scholes strategy, which depend on the direct observation of the appreciation rates. Unfortunately, as well known the appreciation rates are usually hard to observe in real-time market, especially when the volatility coefficients are larger than the average deviations of the appreciation rates per unit time. Moreover, in these studies the error between the terminal wealth and the claim is bounded in the mean–variance sense, rather than in the almost-surely one. In this paper,we consider an investment/hedging model with several newfeatures. First of all, in our model we do not assume that the appreciation rates of the stocks are non-random and observable; we only assume that the distributions of the appreciation rates are known based on the observation of the stock prices. The finally derived strategy depends only on the current stock prices, the distributions of the appreciation rates, and one scalar parameter which can be calculated numerically. Second, our model involves the replication of a given claim with a guaranteed error bound (gap). More precisely, our admissible strategies ensure that the replication errors do not exceed a given level almost surely. Note that in the classical problem (for a complete market) of an exact replication, the strategy is uniquely determined by the claim. In an incomplete market, where an exact replication is no longer generally possible, it is sensible to consider replications with some gap, which in turn makes it possible to choose among many possible strategies. Finally, the utility function under consideration in our model is a fairly general one, covering the mean–variance criterion, non-continuous functions, and nonlinear concave functions as special cases. In particular, our general utility function incorporates the so-called goal achieving problem. A goal achieving problem is to maximize the probability that the event of reaching a prescribed goal happens before the event of a failure. Specifically, it is to maximize P(1  2), where  i is the first time that the discounted process O X.t/ , er.T−t/X.t/ reaches the level ki , i D 1; 2. Here r is the risk free interest rate, k2 is the goal level while k1 is a level considered to be a failure (certainly, k1 < k2). The goal achieving problem is interesting in its own right. The problem for a single-stock market model with only additive stochastic disturbanceswas first solved by Karatzas (1997), where the constructed optimal strategy depends only on the distribution of the stock appreciation rate. In the present paper, using an approach completely different than that of Karatzas (1997), we are able to derive optimal strategies that are independent of the appreciation rate estimations, for a general model with multiple, correlated stocks and additional constraints of bounded risks. In particular, it is concluded that for an optimal strategy the levels k1 and k2 will never be achieved before the expiration time. It should also be noted that for a general problem with non-random appreciation rates, Khanna and Kulldorff (1999) showed that the so-called Mutual Fund Theorem holds, namely, the optimum can be achieved on a set of Merton type strategies. But, this theorem does not hold for the case of random and non-observable rates that is being studied here, nor does the method of Khanna and Kulldorff (1999) apply. The rest of this paper is organized as follows. In Section 2, the general model under consideration is formulated and necessary preliminaries are given. In Section 3, an optimal solution to the general problem is presented. Section 4 discusses several important special cases of the general problem, including the goal achieving problem. Numerical results are reported in Section 5. In Section 6, some concluding remarks are given. Finally, in Appendix, proofs of the results are supplied.