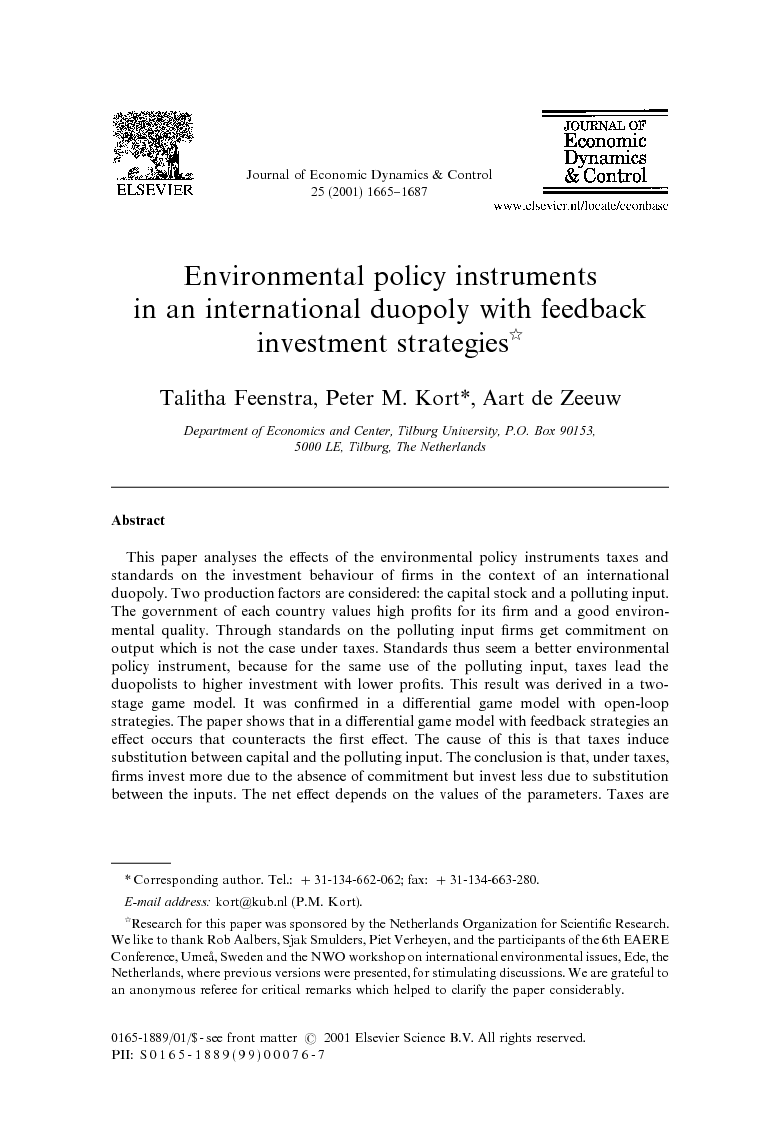 This paper analyses the e!ects of the environmental policy instruments taxes and standards on the investment behaviour of "rms in the context of an international duopoly. Two production factors are considered: the capital stock and a polluting input. The government of each country values high pro"ts for its "rm and a good environmental quality. Through standards on the polluting input "rms get commitment on output which is not the case under taxes. Standards thus seem a better environmental policy instrument, because for the same use of the polluting input, taxes lead the duopolists to higher investment with lower pro"ts. This result was derived in a twostage game model. It was con"rmed in a di!erential game model with open-loop strategies. The paper shows that in a di!erential game model with feedback strategies an e!ect occurs that counteracts the "rst e!ect. The cause of this is that taxes induce substitution between capital and the polluting input. The conclusion is that, under taxes, "rms invest more due to the absence of commitment but invest less due to substitution between the inputs. The net e!ect depends on the values of the parameters. Taxes are better than standards for low rates of depreciation and discount, for low investment costs and for high productivity of capital.

Flexibility is an important reason to advocate economic environmental policy instruments like emission taxes. More than under traditional command and control measures, polluters can choose to what degree and in which way they decrease their pollution. Consequently, the regulator may reach a high allocative e$ciency, even with inadequate information about the cost structure of the polluting "rms. In case of imperfect competition, however, #exibility has also another e!ect, because in such markets commitment plays an important role (see, e.g., Tirole, 1988). In some cases it is advantageous for a "rm in oligopoly to be able to &burn its bridges'. The ability to bind itself to certain actions gives the "rm a relatively strong position towards a competitor. More #exibility by its nature decreases the possibilities to commit. The characteristics of government policy in#uence the #exibility of a "rm. If government policy is implemented by rigid prescriptions, it is a commitment for the "rm. If, on the contrary, the government bases its policy on incentives, "rms are more #exible so that they have less commitments. Brander and Spencer (1983) analysed the di!erences between trade policies when trade can be characterized as an international oligopoly. If governments want high pro"ts for their home "rms, they may want to provide home "rms with commitment via their trade policy. Similarly, the type of environmental policy instrument a!ects the international competitiveness of "rms. In a multistage model of international rivalry where allocative e$ciency is neglected, it was found that environmental standards are unambiguously &better' than taxes (Ulph, 1992). Ceteris paribus, under standards, "rms gain commitment, so that they earn more pro"ts. This paper analyses an international duopoly where the "rms use two production factors: capital and a polluting input. It shows that Ulph's result depends on an (implicit) assumption on the investment behaviour of "rms. In these multistage models investment decisions are taken once and for all which is also a form of commitment in the analysis. If, however, "rms are more #exible in their investment behaviour, strategic interaction is increased and standards are not always better than taxes. This can be shown by using the richer framework of di!erential games, because then a distinction can be made between so called open-loop investment strategies, where the "rms decide on their investment once and for all, and feedback investment strategies, where the "rms can adapt their investments contingent on the way that the game develops. As is to be expected, with open-loop investment strategies the result of multistage games is con"rmed (Feenstra et al., 1996). However, with feedback strategies, it can be shown that the result is ambiguous and either taxes or standards can be better. With feedback investment strategies, the "rms observe the current capital stocks and, thus, implicitly the actions of their competitor. In this way strategic interaction is increased which drives "rms to higher investment with lower pro"ts. The strength of this strategic interaction through investment is di!erent under taxes and under standards. The idea is that higher investment of one "rm reduces the capital stock of the other "rm and under taxes this also has implications for the amount of the polluting input which is used for production. Two e!ects can be considered. The "rst is a marginal productivity e!ect. If the competing "rm's capital stock is reduced, then its marginal revenue of the polluting input decreases, so that this "rm has an incentive to reduce its use of the polluting input too. This leads to a further reduction of output so that the marginal productivity e!ect strengthens the domestic "rm's incentive for strategic investment.The second e!ect generated by a reduced capital stock is a substitution e!ect. When the competing "rm does not want to reduce its output too much, it counters the reduction in capital stock with an increase of the polluting input. This mitigates the e!ect of a higher capital stock on output. Thus the substitution e!ect decreases the domestic "rm's incentive for strategic investment. Under binding standards both e!ects are zero, since "rms' use of the polluting input is "xed at the boundary de"ned by the standard. The foreign "rm will not change its use of the polluting input when its capital stock is reduced. Consequently, the marginal productivity e!ect and the substitution e!ect are zero under this environmental policy instrument. It follows that if the substitution e!ect dominates the marginal productivity e!ect, the incentive for strategic investment under taxes is lowered. When standards and taxes are now compared, the net result is ambiguous. Standards still reduce overinvestments, as was found in the multistage model, but taxes reduce overinvestments due to a large substitution e!ect. Whether standards or taxes are better is not unambiguous anymore, but depends on the parameters of the problem. With a fairly general speci"cation of the functions in the model it can be shown that taxes are better than standards for low rates of depreciation and discount, for low investment costs and for high productivity of capital. Section 2 presents a model of international rivalry as a di!erential game between two competing "rms, located in di!erent countries. Section 3 derives the feedback equilibrium to this model and explains the strategic e!ects. In Section 4 it is shown how the answer to the question whether standards or taxes are a better environmental policy instrument depends on the parameter values. Section 5 concludes the paper.

This paper is concerned with international rivalry and environmental policy. In a multistage framework Ulph (1992) found that environmental taxes lead to higher investment than standards. Firms that compete on an international market have an incentive to increase investments to gain strategic advantage. In equilibrium, however, competitors act similar so that higher capital stocks, more output and lower pro"ts result. Therefore, ceteris paribus, governments prefer standards rather than taxes, due to the reduction in strategic investment. This was con"rmed in Feenstra et al. (1996), in a di!erential-game framework with open-loop investment strategies. The di!erences between environmental taxes and standards as regards their e!ect on strategic behaviour are due to their in#uence on the #exibility of "rms. Standards reduce a "rm's #exibility in its choice of emissions, while taxes do not. In this paper, #exibility in investment behaviour is introduced. More speci"- cally, we consider feedback investment strategies. Under feedback investment strategies, "rms have to take into account that the competitor will react through its investment on marginal increases in capital stocks. The e!ects of environmental standards and taxes on this type of strategic behaviour di!er. It turns out that it cannot } as in the case of open-loop investment strategies } be stated that taxes will always lead to more investments than standards. It is shown in this paper that if substitution e!ects between production factors are large enough, investment is larger under standards than under taxes. Ceteris paribus, governments then prefer taxes rather than standards as environmental policy instrument. Note that in the current model, consumer surpluses are neglected. It is implicitly assumed that "rms sell a substantial part of their output to third countries. Ulph (1996) and Kennedy (1994) include consumer surplus in a multistage game. Since it is in the interest of consumers that competition between the two "rms results in more output, they favour larger investments. Inclusion of consumer surplus would therefore require a di!erent valuation of high capital stocks. When consumer surplus is important, taxes may be preferred by the government to standards, even when taxes lead to more investment than standards.A di!erential-game model of a duopoly describes the behaviour of "rms that compete in an international market. After equilibrium behaviour on the choice of the variable polluting input has been derived, a capital accumulation game results. The two "rms choose investment rates, to maximize their objectives,given government policy and the strategy of the competitor. Feedback equilibria in capital accumulation games are derived in Reynolds (1987) and in Fershtman and de Zeeuw (1992). The game in this paper is a bit di!erent, because investment has indirect e!ects on output through variable input use. That implies that even simple functional speci"cations lead to an objective function which is not quadratic in capital stocks like in the two papers mentioned above. It is possible, however, with the help of an approximation algorithm to extend the method employed in Fershtman and de Zeeuw and to "nd approximations to the steady state. The indirect e!ects through emissions and the approximation imply that equilibrium investment depends in a complex way on domestic and foreign capital stocks. In particular, the sign of the marginal change in equilibrium investment with respect to foreign capital may be either negative or positive. Conditions are given for stable equilibria that are characterized by a negative sign. Although these conditions capture the cases that are economically most relevant, exceptional cases with positive marginal changes in investment are still possible. Flaherty (1980) analyses a capital accumulation game with symmetric and asymmetric equilibria. With the help of linear approximations, it is shown that the asymmetric equilibria are stable and the symmetric equilibrium is not. Although in a di!erent context, this shows that asymmetric equilibria can be important in this type of models. For tractability reasons, our analysis has been restricted to symmetric equilibria for a symmetric model, in which both countries apply the same type of environmental policy. Extensions to the asymmetric case where one country applies taxes and the other standards is an option. However, we do not expect that a (complex) analysis of the asymmetric case would change our conclusion with respect to strategic behaviour.