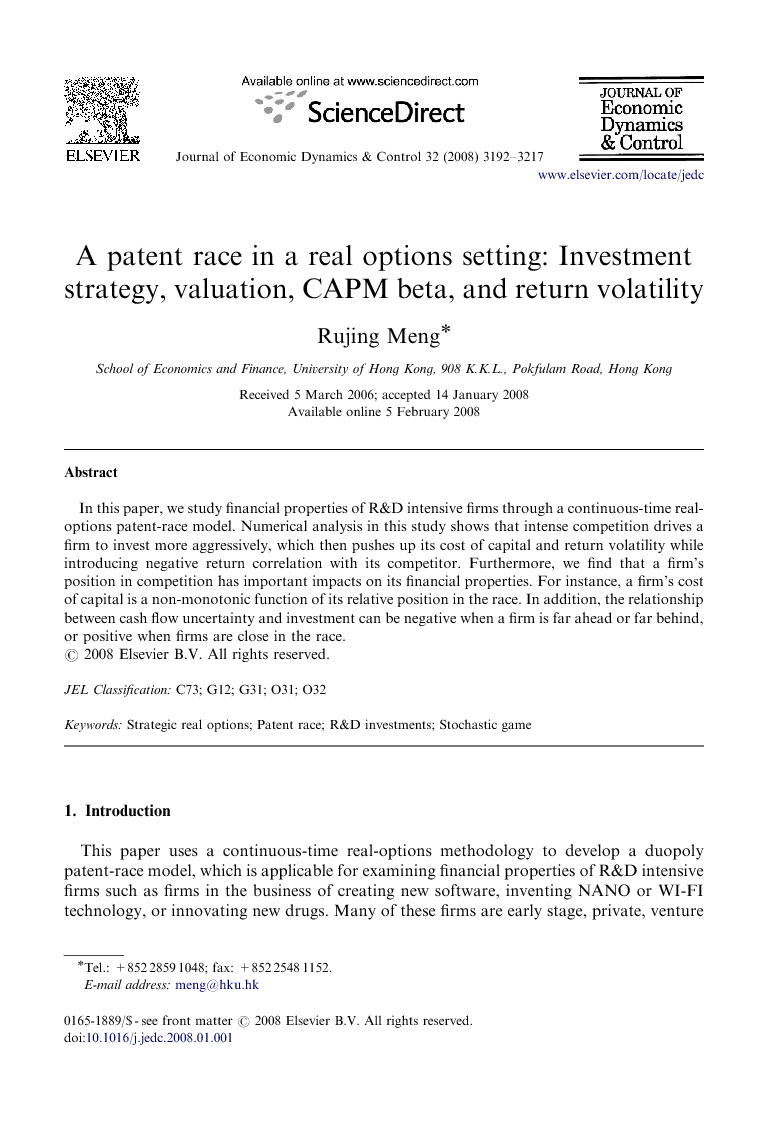 In this paper, we study financial properties of R&D intensive firms through a continuous-time real-options patent-race model. Numerical analysis in this study shows that intense competition drives a firm to invest more aggressively, which then pushes up its cost of capital and return volatility while introducing negative return correlation with its competitor. Furthermore, we find that a firm's position in competition has important impacts on its financial properties. For instance, a firm's cost of capital is a non-monotonic function of its relative position in the race. In addition, the relationship between cash flow uncertainty and investment can be negative when a firm is far ahead or far behind, or positive when firms are close in the race.

In this paper, we develop a continuous-time real-options patent-race model to analyze financial properties of R&D intensive firms. The numerical analysis provided in this study shows that competition causes over-investment and value dissipation relative to the case of joint monopoly, which then pushes up CAPM beta and return volatility, and introduces negative return correlation between the competing firms. These results imply that venture capitalists including competing firms in the portfolio cannot only improve efficiency by mitigating over-investment and value dissipation, but can also reduce portfolio risk via hedging as the returns of competing firms could appear negative correlation. In addition, we find that a firm's position in competition is an important factor in the determination of its financial properties. In particular, the CAPM beta, and thus the cost of capital of an R&D firm, is a non-monotonic function of its relative position to its competitor. The cost of capital is higher when a firm intensively competes with its competitor than when well ahead or well behind. We also find that, as another example, the relationship between cash flow uncertainty and investment can be negative when a firm is far ahead or far behind, or positive when firms are close in the race. So, the relative position of competing firms in a race should be taken as an important control variable in future empirical studies of financial properties of R&D intensive firms. To extend the model, it could be interesting to add explicit learning process about profit flows of the patent and investment opportunities for a firm and its competitor. It may be also worthwhile to study a firm's investment behavior and other financial properties in a competitive environment with the presence of technological spillovers. While competition motivates a firm to invest, technological spillovers may motivate a firm to withhold investments so as to obtain a free ride on investment efforts of its rival. We leave these extensions to future research.