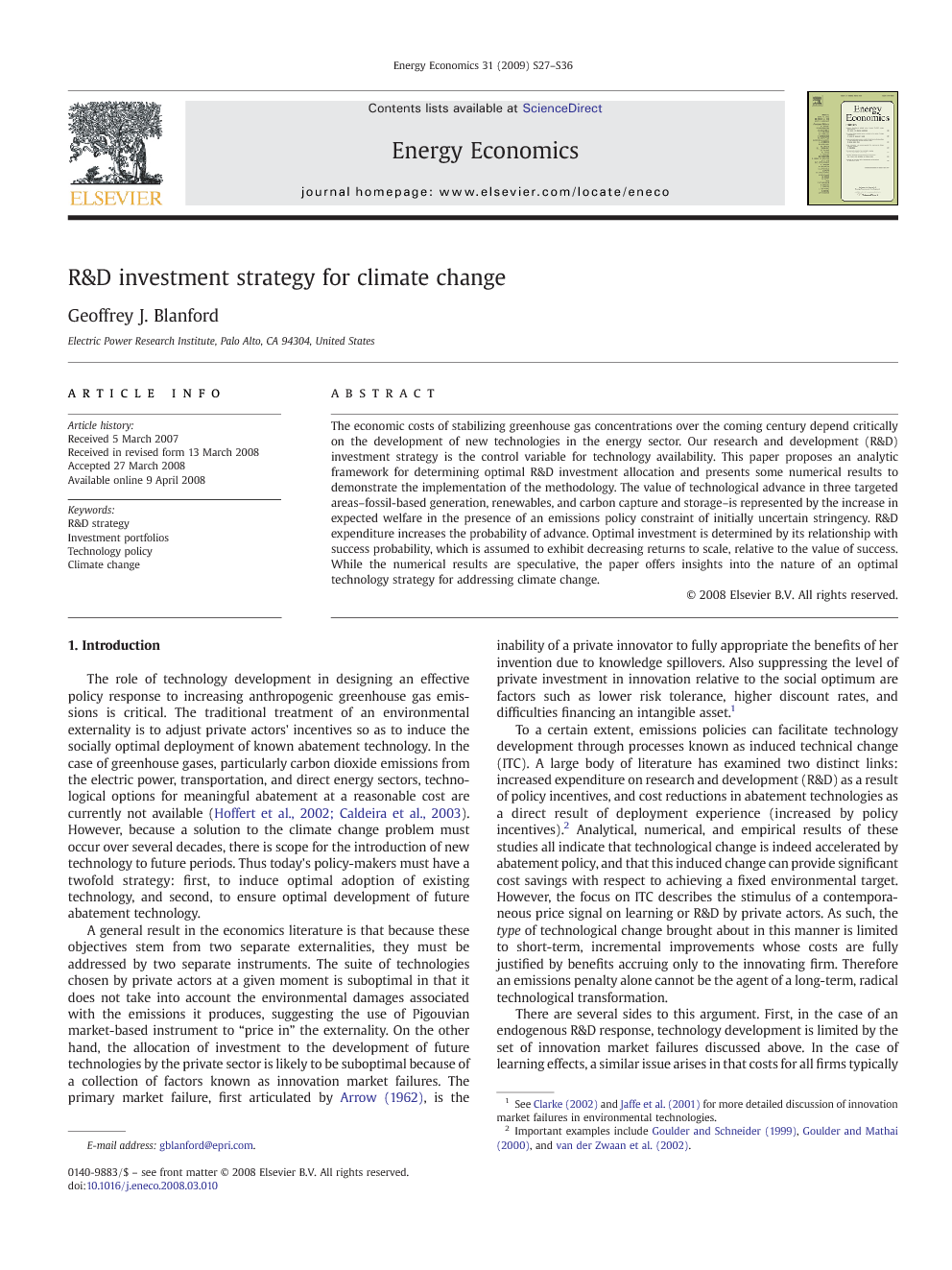 The economic costs of stabilizing greenhouse gas concentrations over the coming century depend critically on the development of new technologies in the energy sector. Our research and development (R&D) investment strategy is the control variable for technology availability. This paper proposes an analytic framework for determining optimal R&D investment allocation and presents some numerical results to demonstrate the implementation of the methodology. The value of technological advance in three targeted areas–fossil-based generation, renewables, and carbon capture and storage–is represented by the increase in expected welfare in the presence of an emissions policy constraint of initially uncertain stringency. R&D expenditure increases the probability of advance. Optimal investment is determined by its relationship with success probability, which is assumed to exhibit decreasing returns to scale, relative to the value of success. While the numerical results are speculative, the paper offers insights into the nature of an optimal technology strategy for addressing climate change.

The role of technology development in designing an effective policy response to increasing anthropogenic greenhouse gas emissions is critical. The traditional treatment of an environmental externality is to adjust private actors' incentives so as to induce the socially optimal deployment of known abatement technology. In the case of greenhouse gases, particularly carbon dioxide emissions from the electric power, transportation, and direct energy sectors, technological options for meaningful abatement at a reasonable cost are currently not available (Hoffert, 2002 and Caldeira et al., 2003). However, because a solution to the climate change problem must occur over several decades, there is scope for the introduction of new technology to future periods. Thus today's policy-makers must have a twofold strategy: first, to induce optimal adoption of existing technology, and second, to ensure optimal development of future abatement technology. A general result in the economics literature is that because these objectives stem from two separate externalities, they must be addressed by two separate instruments. The suite of technologies chosen by private actors at a given moment is suboptimal in that it does not take into account the environmental damages associated with the emissions it produces, suggesting the use of Pigouvian market-based instrument to “price in” the externality. On the other hand, the allocation of investment to the development of future technologies by the private sector is likely to be suboptimal because of a collection of factors known as innovation market failures. The primary market failure, first articulated by Arrow (1962), is the inability of a private innovator to fully appropriate the benefits of her invention due to knowledge spillovers. Also suppressing the level of private investment in innovation relative to the social optimum are factors such as lower risk tolerance, higher discount rates, and difficulties financing an intangible asset.1 To a certain extent, emissions policies can facilitate technology development through processes known as induced technical change (ITC). A large body of literature has examined two distinct links: increased expenditure on research and development (R&D) as a result of policy incentives, and cost reductions in abatement technologies as a direct result of deployment experience (increased by policy incentives).2 Analytical, numerical, and empirical results of these studies all indicate that technological change is indeed accelerated by abatement policy, and that this induced change can provide significant cost savings with respect to achieving a fixed environmental target. However, the focus on ITC describes the stimulus of a contemporaneous price signal on learning or R&D by private actors. As such, the type of technological change brought about in this manner is limited to short-term, incremental improvements whose costs are fully justified by benefits accruing only to the innovating firm. Therefore an emissions penalty alone cannot be the agent of a long-term, radical technological transformation. There are several sides to this argument. First, in the case of an endogenous R&D response, technology development is limited by the set of innovation market failures discussed above. In the case of learning effects, a similar issue arises in that costs for all firms typically decrease in aggregate deployment of a new technology, suggesting a “free-rider” problem. Moreover, it is not clear whether technological change stemming from experience occurs strategically or coincidentally. Thus the rate of technical change of any type from endogenous processes is likely to be lower than the social optimum. Secondly, only developments with benefits accruing in roughly the same time period can be induced by the current emissions penalty. In general, since private discount rates are typically lower than social rates, firms do not optimize over long timeframes. Moreover, if they did, beliefs about future abatement policy conditions, rather than the concurrent policy, would determine R&D investment decisions.3 Finally, the presence of innovation market failures and the abbreviated time horizon of ITC together suggest the distinction between the basic and applied ends of the research spectrum. Applied research refers to the development of proven concepts into commercially viable configurations, including incremental, rather than fundamental, design improvements. Basic research refers to the creation of new concepts, perhaps with broad applicability to several areas, and often characterized by radical improvements in cost or efficiency. Applied research typically has a shorter time cycle and more deterministic outcomes, whereas basic research requires an extended timeframe and has highly uncertain outcomes. Because of limited planning horizons, comparatively low risk tolerance, and acute appropriability failures for basic research outcomes, the private sector's capabilities are largely centered on applied technology development. The inability of an emissions policy to motivate investment in targeted long-term, basic research is a critical gap in the public strategy to address climate change, since fundamentally new technology is required for a cost-effective transition to a low- or zero-carbon energy system consistent with the stated goal of climate stabilization (UNFCCC, 1992). There is significant uncertainty about the optimal stabilization level, which will reflect the severity of damages from climate change, as well as about the availability of mitigation options. As opposed to uncertainty about damages, the probability distribution over the set of technological possibilities can be controlled; our R&D investment strategy is the control variable. The extent and allocation of this investment must therefore be viewed as a risk management problem. This paper proposes an analytic framework for determining optimal R&D investment allocation and presents numerical results from a sample implementation of the methodology in the context of climate change policy.

Market-based abatement policies are effective mechanisms for bringing about the diffusion of existing technologies and can even spur incremental improvements through learning and induced applied R&D. Thus abatement policy is a mechanism for getting technologies “off the shelf.” However, because of long timeframes and limited appropriability in basic research, a second mechanism is required to put new abatement technologies “on the shelf.” The implementation of a technology strategy for a long-term environmental problem such as climate change is a challenging policy task. Observing that the instantaneous emissions price is an insufficient incentive for private investment in basic research, and that announcements of a future price are not credible, a policy response must include a program of direct public R&D investment or targeted R&D subsidies. Deutch (2005) argues that this is the government's strength. However, there are also concerns about the ability of governments to provide efficient central management of broad R&D portfolios, and private subsidies are prone to leakage and other forms of gaming. The portfolio in the framework presented here may be viewed as a hypothetical amalgamation of research across a spectrum of institutions, including governmental agencies, national labs, non-governmental organizations (NGOs), universities, and industry consortiums. In addition, a technology strategy must include activities beyond basic research in support of the demonstration, diffusion, and utilization phases. Rather than focus on where and how the investment takes place, this study suggests normative guidelines for its overall magnitude and allocation. The modeling framework links the “demand side” of new technology–its potential value in a carbon-constrained policy regime–with the “supply side” of new technology, the much more subjective and intractable relationship between research investment and technical success. The value calculation does not translate directly into investment, but must be weighed against a probabilistic representation of the program's effectiveness as well as interdependence among programs. The modeling exercise in MERGE provides a reliable numerical estimate of the social value of technology as formulated, although it evaluated the impact of only a subset of potential technologies in a single region over the next 50 years. However, the calibration of the innovation production function is highly speculative. Thus the numerical results of the simple R&D model, particularly concerning the magnitude of optimal investment, should be interpreted only as an example of the framework's output. More empirical evidence describing the relationship between expenditure and probability of success will add rigor to estimates of optimal R&D levels. This paper is intended to offer a blueprint for future analysis of R&D investment decisions, a crucially important component of the policy response to climate change. Even considering that the formulation likely underestimates technology value, the benefits of successful research programs are much larger than current R&D expenditures. This work outlines the strategy for an accelerated technology research effort.