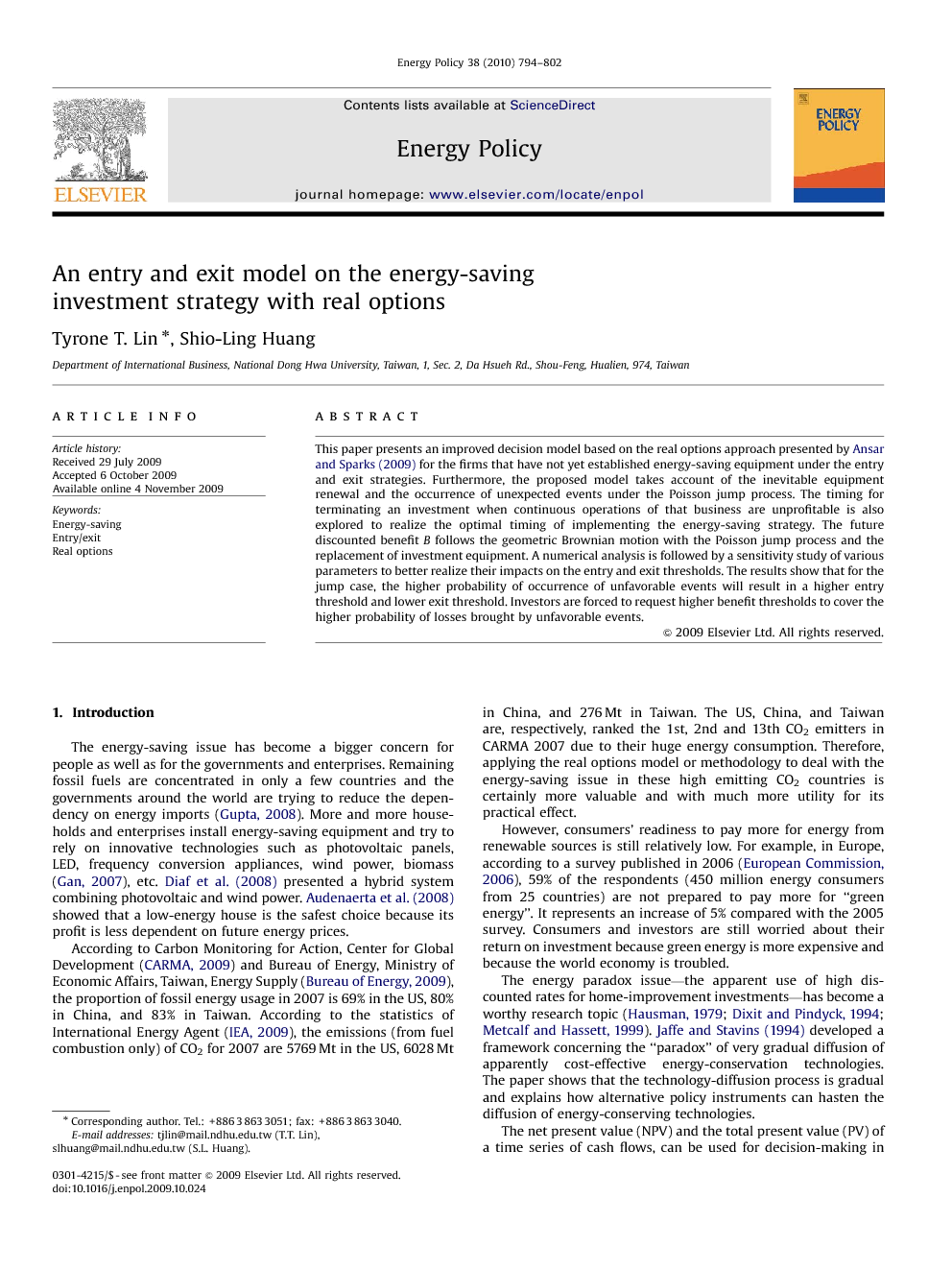 This paper presents an improved decision model based on the real options approach presented by Ansar and Sparks (2009) for the firms that have not yet established energy-saving equipment under the entry and exit strategies. Furthermore, the proposed model takes account of the inevitable equipment renewal and the occurrence of unexpected events under the Poisson jump process. The timing for terminating an investment when continuous operations of that business are unprofitable is also explored to realize the optimal timing of implementing the energy-saving strategy. The future discounted benefit B follows the geometric Brownian motion with the Poisson jump process and the replacement of investment equipment. A numerical analysis is followed by a sensitivity study of various parameters to better realize their impacts on the entry and exit thresholds. The results show that for the jump case, the higher probability of occurrence of unfavorable events will result in a higher entry threshold and lower exit threshold. Investors are forced to request higher benefit thresholds to cover the higher probability of losses brought by unfavorable events.

The strengths of the NPV analysis are that it is a relatively clear and simple method to assess an investment project under certain and stable conditions or environments. The decision-making procedure of the NPV method can be accomplished in a short period with the cheap evaluation cost. While the future environment is favorable to investment and can be predicted precisely, the decision-maker will tend to exercise the investment project; otherwise, the project will be rejected. However, we will face a highly uncertain energy structure and energy environment in the future. It is time consuming to formulate a policy for its long-term impact. Therefore, it is preferential to apply the ROA to assess an energy-saving investment project so as to avoid downside risk. The real options approach in energy-saving installation can be more suitable for its flexible and high risk consideration. This paper extends a model based on the real options approach presented in Ansar and Sparks (2009), which describes the benefit status of energy-saving investment under the continuous time process. The extended model takes into account the potential value of a strategy in an uncertain circumstance and chooses the optimal timing and entry/exit thresholds to do a feasible decision, which is much more realistic and flexible to more easily meet the evaluation of long-term policy. In addition, followed by the considerration of high-tech energy-saving device innovation and device efficiency depletion causing by long-term usage, the parameters describing the inevitable replacement of the equipment every n years and the occurrence of unexpected events are also added to the improved model to more faithfully present the reality. From the viewpoint of management, re-considering the execution of energy-saving strategy is inevitable in the domain from persons or households to enterprises, industries, national energy-saving policy, or even to the across-country region and global village. The improved model and research method presented in this paper can also be applied to the similar energy issues or other project evaluations under an uncertain environment with high downside risk.