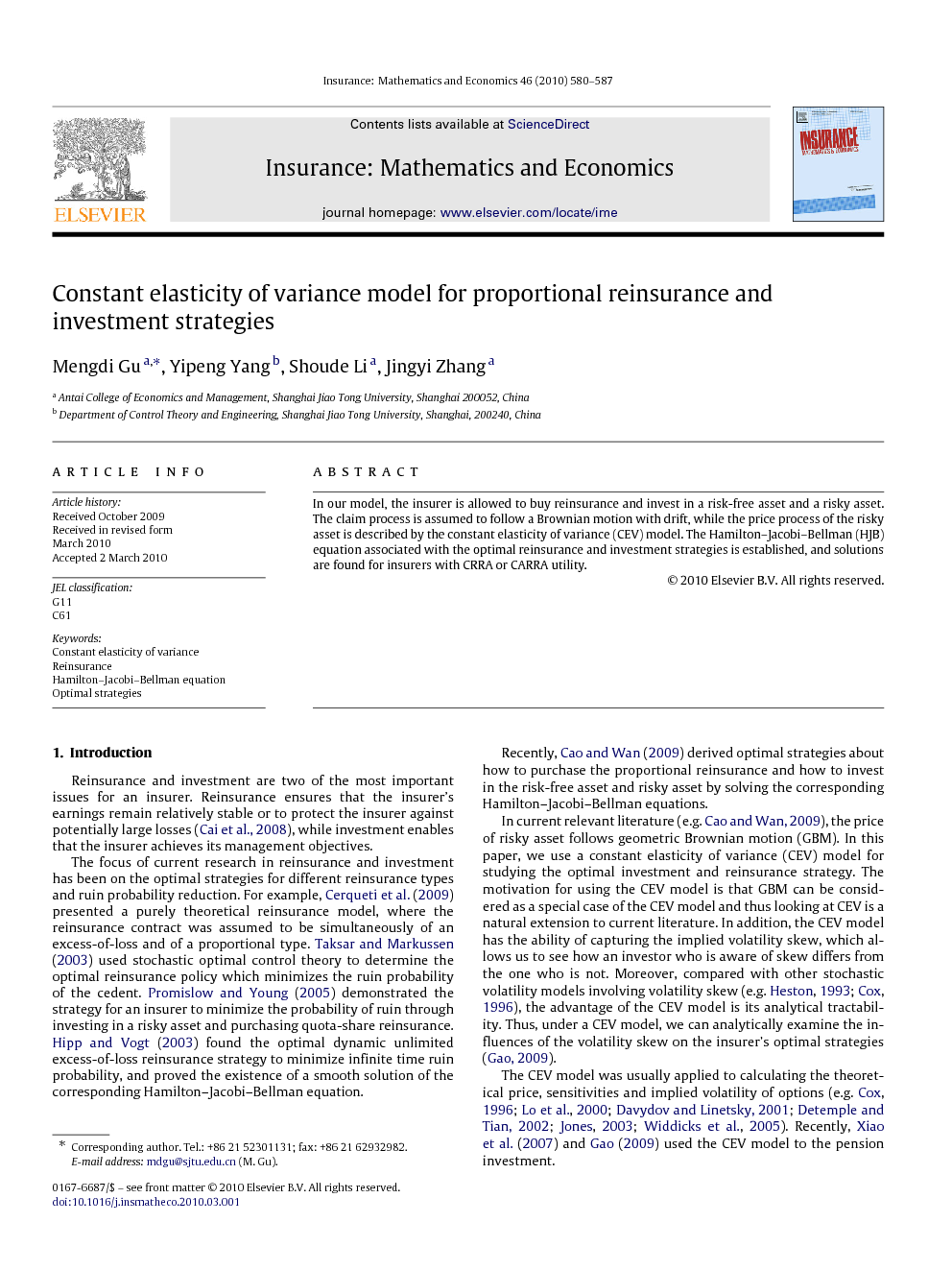 In our model, the insurer is allowed to buy reinsurance and invest in a risk-free asset and a risky asset. The claim process is assumed to follow a Brownian motion with drift, while the price process of the risky asset is described by the constant elasticity of variance (CEV) model. The Hamilton–Jacobi–Bellman (HJB) equation associated with the optimal reinsurance and investment strategies is established, and solutions are found for insurers with CRRA or CARRA utility.

Reinsurance and investment are two of the most important issues for an insurer. Reinsurance ensures that the insurer’s earnings remain relatively stable or to protect the insurer against potentially large losses (Cai et al., 2008), while investment enables that the insurer achieves its management objectives. The focus of current research in reinsurance and investment has been on the optimal strategies for different reinsurance types and ruin probability reduction. For example, Cerqueti et al. (2009) presented a purely theoretical reinsurance model, where the reinsurance contract was assumed to be simultaneously of an excess-of-loss and of a proportional type. Taksar and Markussen (2003) used stochastic optimal control theory to determine the optimal reinsurance policy which minimizes the ruin probability of the cedent. Promislow and Young (2005) demonstrated the strategy for an insurer to minimize the probability of ruin through investing in a risky asset and purchasing quota-share reinsurance. Hipp and Vogt (2003) found the optimal dynamic unlimited excess-of-loss reinsurance strategy to minimize infinite time ruin probability, and proved the existence of a smooth solution of the corresponding Hamilton–Jacobi–Bellman equation. Recently, Cao and Wan (2009) derived optimal strategies about how to purchase the proportional reinsurance and how to invest in the risk-free asset and risky asset by solving the corresponding Hamilton–Jacobi–Bellman equations. In current relevant literature (e.g. Cao and Wan, 2009), the price of risky asset follows geometric Brownian motion (GBM). In this paper, we use a constant elasticity of variance (CEV) model for studying the optimal investment and reinsurance strategy. The motivation for using the CEV model is that GBM can be considered as a special case of the CEV model and thus looking at CEV is a natural extension to current literature. In addition, the CEV model has the ability of capturing the implied volatility skew, which allows us to see how an investor who is aware of skew differs from the one who is not. Moreover, compared with other stochastic volatility models involving volatility skew (e.g. Heston, 1993 and Cox, 1996), the advantage of the CEV model is its analytical tractability. Thus, under a CEV model, we can analytically examine the influences of the volatility skew on the insurer’s optimal strategies (Gao, 2009). The CEV model was usually applied to calculating the theoretical price, sensitivities and implied volatility of options (e.g. Cox, 1996, Lo et al., 2000, Davydov and Linetsky, 2001, Detemple and Tian, 2002, Jones, 2003 and Widdicks et al., 2005). Recently, Xiao et al. (2007) and Gao (2009) used the CEV model to the pension investment.

We have adopted the CEV model to describe the dynamic movements of the risky market price in the optimal reinsurance and investment decision-making. As GBM is a special case of the CEV model, our work is an extension of the relevant literature (e.g. Cao and Wan, 2009). A partial differential equation is derived for the optimization problem. To obtain the optimal reinsurance and investment strategies, solutions should be found for the partial differential equation. In the general framework, such an equation is very complicated and cannot be solved. We provide the explicit solutions for the CRRA and CARA utilities via power transformation technique and variable change method in this paper.