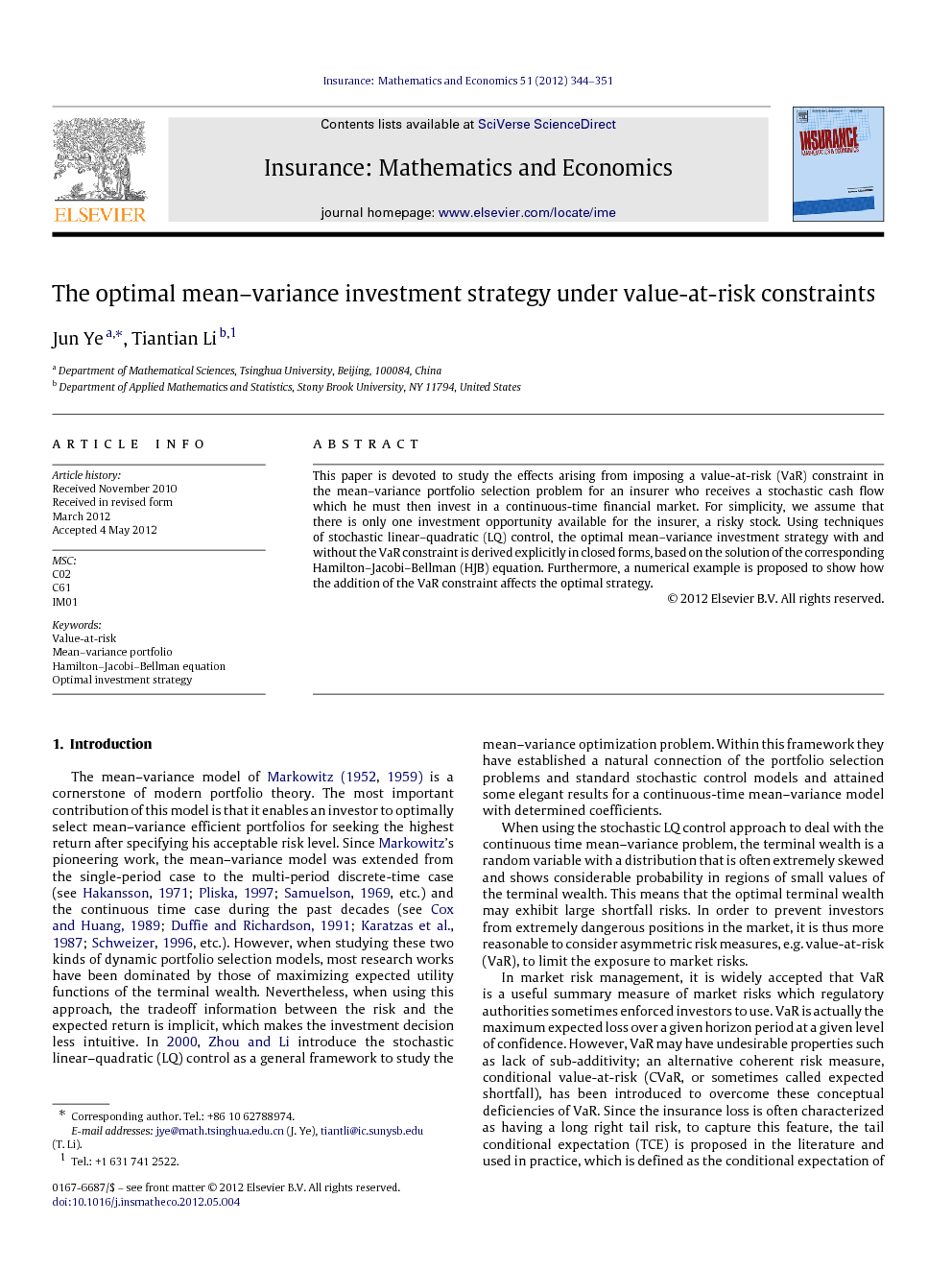 This paper is devoted to study the effects arising from imposing a value-at-risk (VaR) constraint in the mean–variance portfolio selection problem for an insurer who receives a stochastic cash flow which he must then invest in a continuous-time financial market. For simplicity, we assume that there is only one investment opportunity available for the insurer, a risky stock. Using techniques of stochastic linear–quadratic (LQ) control, the optimal mean–variance investment strategy with and without the VaR constraint is derived explicitly in closed forms, based on the solution of the corresponding Hamilton–Jacobi–Bellman (HJB) equation. Furthermore, a numerical example is proposed to show how the addition of the VaR constraint affects the optimal strategy.

The mean–variance model of Markowitz, 1952 and Markowitz, 1959 is a cornerstone of modern portfolio theory. The most important contribution of this model is that it enables an investor to optimally select mean–variance efficient portfolios for seeking the highest return after specifying his acceptable risk level. Since Markowitz’s pioneering work, the mean–variance model was extended from the single-period case to the multi-period discrete-time case (see Hakansson, 1971, Pliska, 1997 and Samuelson, 1969, etc.) and the continuous time case during the past decades (see Cox and Huang, 1989, Duffie and Richardson, 1991, Karatzas et al., 1987 and Schweizer, 1996, etc.). However, when studying these two kinds of dynamic portfolio selection models, most research works have been dominated by those of maximizing expected utility functions of the terminal wealth. Nevertheless, when using this approach, the tradeoff information between the risk and the expected return is implicit, which makes the investment decision less intuitive. In 2000, Zhou and Li introduce the stochastic linear–quadratic (LQ) control as a general framework to study the mean–variance optimization problem. Within this framework they have established a natural connection of the portfolio selection problems and standard stochastic control models and attained some elegant results for a continuous-time mean–variance model with determined coefficients. When using the stochastic LQ control approach to deal with the continuous time mean–variance problem, the terminal wealth is a random variable with a distribution that is often extremely skewed and shows considerable probability in regions of small values of the terminal wealth. This means that the optimal terminal wealth may exhibit large shortfall risks. In order to prevent investors from extremely dangerous positions in the market, it is thus more reasonable to consider asymmetric risk measures, e.g. value-at-risk (VaR), to limit the exposure to market risks. In market risk management, it is widely accepted that VaR is a useful summary measure of market risks which regulatory authorities sometimes enforced investors to use. VaR is actually the maximum expected loss over a given horizon period at a given level of confidence. However, VaR may have undesirable properties such as lack of sub-additivity; an alternative coherent risk measure, conditional value-at-risk (CVaR, or sometimes called expected shortfall), has been introduced to overcome these conceptual deficiencies of VaR. Since the insurance loss is often characterized as having a long right tail risk, to capture this feature, the tail conditional expectation (TCE) is proposed in the literature and used in practice, which is defined as the conditional expectation of losses above the VaR to measure the average along the right-tail. It should be noted that TCE coincides with CVaR for fixed level when the loss has a continuous distribution. In this case, TCE and CVaR are actually the weighted average of VaR, in other words, all of them are equivalent in this paper. For comprehensive introduction to risk management using VaR, CVaR or TCE, we refer the reader to Jorion (1997) or Acerbi and Tasche (2002). Recognizing that risk management is typically not an investor’s primary objective, the investors would like to limit their risks while maximizing expected utility. This leads to stochastic control problems under restrictions on such risk measures. There has been considerable interest in the study of portfolio selection models subject to a VaR constraint. Emmer et al. (2000), Alexander and Baptista, 2004 and Alexander and Baptista, 2007 investigate the optimal portfolio choices subject to a VaR or CVaR constraint in a static (one-period) setting. The similar problems in a dynamic setting have started to draw more attention recently; Basak and Shapiro (2001) focus on the optimal portfolio policies of a utility-maximizing agent by imposing the VaR constraint at one point in time. Cuoco et al. (2008) developed a realistic dynamically consistent model of the optimal behavior of a trader subject to risk constraints. They assume that the risk of the trading portfolio is re-evaluated dynamically by using the conditioning information, and hence the trader must satisfy the risk limit continuously. Yiu (2004) explicitly derived the standard VaR constraint on total wealth and obtained the optimal trading strategy (without consideration of re-insurance). Pirvu (2005) started with the model of Cuoco et al. (2008) and found the optimal growth portfolio subject to these risk measures. Pirvu (2007) extended those results by extensively studying the optimal investment and consumption strategies for both logarithmic utility and non-logarithmic CRRA utilities. Recently, Chen et al. (2010) have investigated the optimal investment–reinsurance policy for an insurance company subject to a VaR constraint when minimizing the ruin probability. Motivated by Zhou and Li (2000) and Yiu (2004), this paper addresses the problem of an insurer who receives an uncontrollable stochastic cash flow which he must then invest in a continuous-time financial market in order to maximize the weighted average of the expectation and the variance of his terminal wealth at a horizon time. The main focus in this paper is on the mean–variance optimization problem of the insurer subject to a risk limit specified in terms of VaR on his future net worth. To our knowledge, this problem has not yet received a complete treatment in the existing literature. In this paper, we derive the optimal mean–variance investment strategy under a standard VaR constraint by solving the corresponding Hamilton–Jacobi–Bellman (HJB) equation and explore how the addition of a risk constraint affects the optimal solution. The rest of the paper is organized as follows. Section 2 describes the model, including the definition of the VaR on the future net worth process. Section 3 contains the main characterization result of the VaR constraint and formulates the portfolio optimization problem that can be eventually discussed as a stochastic LQ problem. Section 4 gives the explicit solution of the optimal mean–variance strategy without the VaR constraint by solving the corresponding HJB equation. Section 5 discusses the optimal mean–variance strategy with the VaR constraint. Section 6 provides a numerical example to show how the addition of the VaR constraint affects the optimal strategy. Section 7 concludes the paper.

In this paper, we have investigated the mean–variance portfolio selection problem for an insurer subject to a VaR constraint. The dynamic programming technique and the stochastic LQ control theory have been applied to reduce the problem to solving the HJB equation coupling with the VaR constraint. Closed-form expressions for the optimal mean–variance investment strategy with and without the VaR constraint have been obtained. Moreover, from the numerical results, we find that investments in risky asset can be optimally reevaluated by the imposed VaR constraint. There are several interesting problems that deserve further investigation. First, in order to get the explicit forms of the optimal mean–variance strategies, this paper assumes that there is only one investment opportunity available for the insurer. However, in practice the insurer may purchase a reinsurance contract from a reinsurer while invests his surplus into the risk-free asset and multiple risky assets simultaneously to decrease the risk. If we consider the mean–variance portfolio selection problem for these realistic models, the explicit results are hardly derived when embedding the VaR constraint into an optimizing framework. Second, this paper investigates the impact of adding a classical VaR constraint to the mean–variance portfolio selection problem. Recognizing that the VaR constraint is known to possess unappealing features, it is interesting to investigate the optimization problem with other risk measure constraints, for instance the CVaR constraint, TCE constraint or the constraints in terms of other distortion risk measures. We believe that the optimization problem with the CVaR constraint or TCE constraint can also be solved explicitly since the future net worth at given time is Gaussian in our setting. Third, it is worth noting that the model described in this paper can be improved by adding further ingredients such as, for instance, some forms of stochasticity on the volatility coefficient, the VaR level dependent with current wealth or even adding the jump components in the market models. Finally, it is of interest to study the variation of the optimal portfolio selection coming from a non-Gaussian market, which can describe the behavior of asset (or portfolio) returns in a very realistic way. However, as soon as we move away from the Gaussian world, the optimization problem becomes analytically intractable, and we believe that there may be significant differences in portfolio choices when going from a normal to a non-Gaussian market dynamic.