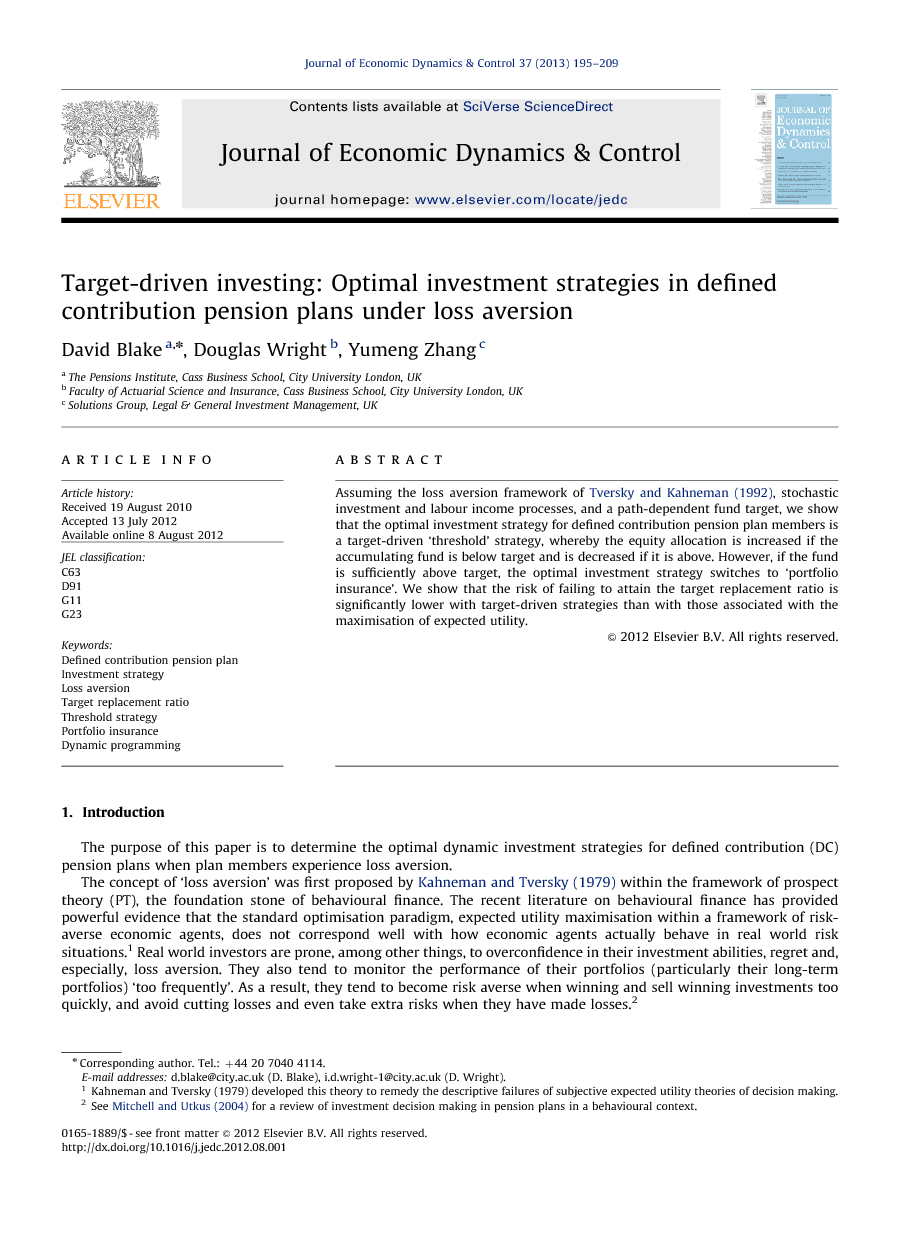 Assuming the loss aversion framework of Tversky and Kahneman (1992), stochastic investment and labour income processes, and a path-dependent fund target, we show that the optimal investment strategy for defined contribution pension plan members is a target-driven ‘threshold’ strategy, whereby the equity allocation is increased if the accumulating fund is below target and is decreased if it is above. However, if the fund is sufficiently above target, the optimal investment strategy switches to ‘portfolio insurance’. We show that the risk of failing to attain the target replacement ratio is significantly lower with target-driven strategies than with those associated with the maximisation of expected utility.

We have applied some of the most powerful lessons of behavioural finance to solve the optimal investment strategy in a defined contribution pension plan. The key lesson is that loss aversion with respect to a series of reference wealth levels in the form of increasing target fund values over the life of the plan might well provide a better representation of a typical plan member's attitude to risk taking than risk aversion in respect of the terminal fund value at retirement, the most commonly used approach from expected utility theory. The most popular investment strategy by practitioners, conventional lifestyling, does not even take the plan members’ attitude to risk or loss into account. Nor does it take into account the stochastic nature of asset returns and the plan member's labour income.22 Loss aversion (as originally outlined in Tversky and Kahneman (1992)) leads to a new type of target-driven approach to deriving the dynamic optimal asset allocation. The key findings from using this approach are as follows: •The optimal investment strategy under loss aversion is consistent with a ‘threshold’ strategy. With this strategy, the weight in equities is increased if the accumulating fund is below the interim target (since plan members are risk seeking in the domain of losses) and is decreased if the fund is above target (since plan members are risk averse in the domain of gains), unless the fund is very much above target, in which case plan members are comfortable with assuming more equity risk again and accordingly adopt a ‘portfolio insurance’ investment strategy. However, as the retirement date approaches and assuming the fund is on target, the overall equity weight begins to fall and the value of the fund is ‘banked’ by switching to lower risk investments, such as bonds. The strategy is highly focused on achieving a target replacement ratio at retirement. •The switch to a more conservative asset allocation strategy is implemented at lower current fund values (relative to target) and at a lower age, the higher is the loss aversion ratio, λ. Although the mean replacement ratio falls as a consequence, the expected shortfall from the target decreases. • The effect of higher risk aversion in the domain of gains (measured by a lower v1 in the PT utility function) leads, unsurprisingly, to an earlier switch out of equities and a lower mean replacement ratio, but also to a lower expected shortfall. The effect of greater risk seeking in the domain of losses (measured by a lower v2 in the PT utility function) leads to a later switch away from equities, a higher mean replacement ratio, a higher probability of achieving the target but also a higher expected shortfall. •Compared with the standard framework of risk aversion, loss-averse plan members are committed to achieving interim and final target fund levels and, accordingly, adopt a more conservative asset allocation strategy. Although this leads to a lower mean replacement ratio at retirement, there is a greater likelihood of achieving the desired target replacement ratio and a lower expected shortfall. • Compared with a conventional lifestyle investment approach, the optimal target-driven investment strategy significantly increases the likelihood of achieving the chosen target, thereby providing a much greater degree of certainty in retirement planning. The risks inherent in the conventional lifestyle strategy appear to be much higher than generally understood. Thus, for DC plan members who seek greater certainty of outcome in retirement planning, the investment strategy adopted over time needs to be far more focused on achieving the specified target replacement ratio. The target-driven investment strategy arising from within a framework of loss aversion is an example of a highly focused investment strategy. However, the framework is not easy to implement since it requires the solution of a nonlinear dynamic programming problem whenever there is new information about the key state variables. Nevertheless, in practice, it should be possible to design an approximately optimal investment strategy, given member profile characteristics (such as age and occupation) and values of the key state variables (e.g., interim fund level and current labour income). Financial advisers would then be able to advise on the appropriate investment strategy for the coming year depending on how far the actual fund level was away from the interim target fund level.