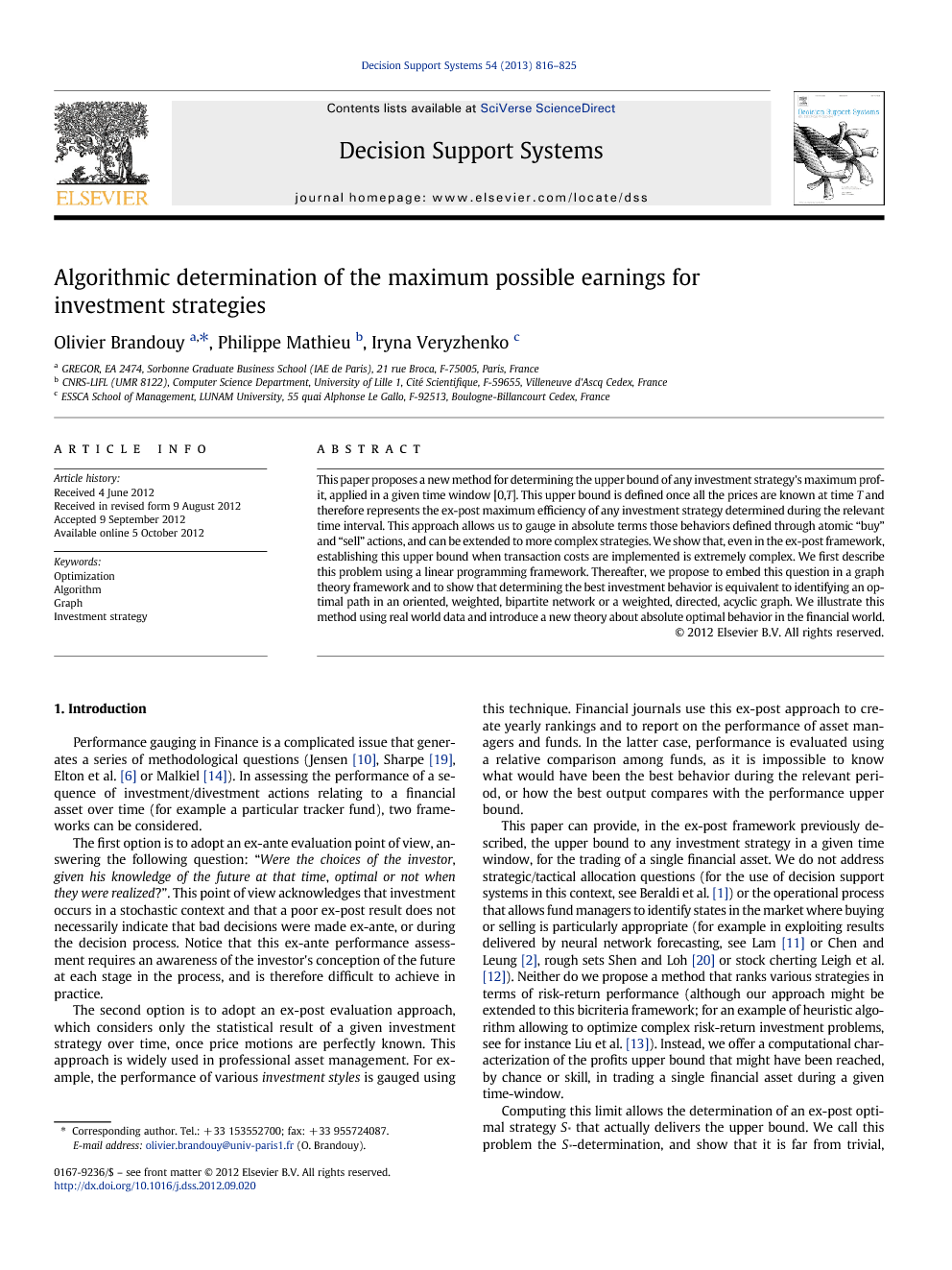 This paper proposes a new method for determining the upper bound of any investment strategy's maximum profit, applied in a given time window [0,T]. This upper bound is defined once all the prices are known at time T and therefore represents the ex-post maximum efficiency of any investment strategy determined during the relevant time interval. This approach allows us to gauge in absolute terms those behaviors defined through atomic “buy” and “sell” actions, and can be extended to more complex strategies. We show that, even in the ex-post framework, establishing this upper bound when transaction costs are implemented is extremely complex. We first describe this problem using a linear programming framework. Thereafter, we propose to embed this question in a graph theory framework and to show that determining the best investment behavior is equivalent to identifying an optimal path in an oriented, weighted, bipartite network or a weighted, directed, acyclic graph. We illustrate this method using real world data and introduce a new theory about absolute optimal behavior in the financial world.

Performance gauging in Finance is a complicated issue that generates a series of methodological questions (Jensen [10], Sharpe [19], Elton et al. [6] or Malkiel [14]). In assessing the performance of a sequence of investment/divestment actions relating to a financial asset over time (for example a particular tracker fund), two frameworks can be considered. The first option is to adopt an ex-ante evaluation point of view, answering the following question: “Were the choices of the investor, given his knowledge of the future at that time, optimal or not when they were realized?”. This point of view acknowledges that investment occurs in a stochastic context and that a poor ex-post result does not necessarily indicate that bad decisions were made ex-ante, or during the decision process. Notice that this ex-ante performance assessment requires an awareness of the investor's conception of the future at each stage in the process, and is therefore difficult to achieve in practice. The second option is to adopt an ex-post evaluation approach, which considers only the statistical result of a given investment strategy over time, once price motions are perfectly known. This approach is widely used in professional asset management. For example, the performance of various investment styles is gauged using this technique. Financial journals use this ex-post approach to create yearly rankings and to report on the performance of asset managers and funds. In the latter case, performance is evaluated using a relative comparison among funds, as it is impossible to know what would have been the best behavior during the relevant period, or how the best output compares with the performance upper bound. This paper can provide, in the ex-post framework previously described, the upper bound to any investment strategy in a given time window, for the trading of a single financial asset. We do not address strategic/tactical allocation questions (for the use of decision support systems in this context, see Beraldi et al. [1]) or the operational process that allows fund managers to identify states in the market where buying or selling is particularly appropriate (for example in exploiting results delivered by neural network forecasting, see Lam [11] or Chen and Leung [2], rough sets Shen and Loh [20] or stock cherting Leigh et al. [12]). Neither do we propose a method that ranks various strategies in terms of risk-return performance (although our approach might be extended to this bicriteria framework; for an example of heuristic algorithm allowing to optimize complex risk-return investment problems, see for instance Liu et al. [13]). Instead, we offer a computational characterization of the profits upper bound that might have been reached, by chance or skill, in trading a single financial asset during a given time-window. Computing this limit allows the determination of an ex-post optimal strategy S* that actually delivers the upper bound. We call this problem the S*-determination, and show that it is far from trivial, despite its similarity to many popular models that have frequently proved completely inefficient. Our new method delivers an absolute performance indicator geared towards the ex-post evaluation of a wide range of trading strategies. This upper bound can be characterized using a linear programming framework and solved with a simplex approach or with dynamic programming formalism. Nevertheless, if these methods are theoretically correct, they suffer from severe limitations in terms of computability (in the worst case, the underlying algorithm being non-polynomial for the simplex). We therefore propose to embed this question in a graph theory framework and to show that determining the best investment behavior is equivalent to identifying an optimal path in an oriented, weighted, bipartite network. We illustrate these results with real data as well as simulated algorithmic trading methods. This paper is organized as follow. We first formalize the framework we start from, define explicitly the S*-determination problem, and give some illustrations of the complexity of the optimization task delivering S* (Section 2). We then present the mathematical frameworks related to these questions (Section 3) and a new algorithm geared at identifying the S* strategy (Section 4). In the last section we illustrate this latter algorithm and provide some practical implementations to gauge the ex-post absolute performance of a few trading strategies (Section 5).

We now propose one application of the S*-determination method on a real-world financial series drawn from the daily Dow Jones Index (DJI). This series records each day's closing of the New York stock exchange (NYSE) from December 2, 1980 to February 20, 2009 (i.e. 7156 observations). The unpredictability of future price changes (a cornerstone of modern finance) can be deduced from the randomness of financial returns. On December 2, 1980, no economic agent could have predicted with accuracy the next 7156 DJI closing prices. Even if this had been possible, making use of this knowledge under the constraints enumerated in Section 2 would have been impossible without the S*-determination algorithm. Any additional element of uncertainty (unpredictable prices for example) simply increases this initial complexity. However, any strategy for trading a DJI tracker in this time window could be matched against the optimal set of actions identified through the S*-determination method. Using approaches based on the Floyd algorithm (Subsection 4.1) and the DAG longest-path algorithm (Subsection 4.2), we determine the best behavior with transaction costs c respectively at 0% and 5%. The maximum wealth obtainable in these two cases is greater than 1.10E + 015 in the first case and 1.83E + 010 in the second. These figures seem extraordinarily high; one must keep in mind that they are impossible to obtain because of the global unpredictability of the market at date t with regard to information available on this date. In Fig. 4, we present the evolution of the wealth of an investor who found (by chance or skill) the S * set of actions in both contexts.Some agents claim to be able to predict future prices with some accuracy or at least to identify dates when investors should enter the market or shorten their positions. Technical traders claim to detect signals in past prices (based on patterns) associated with potential market reversals. If the perceived signals indicate at date t a further increase in stock prices, such investors buy stocks immediately until they receive a new signal, dated t + T, associated with the next decrease in prices. Then the technical traders will shorten their positions to avoid losses. One popular model compares two moving averages based on past prices: the moving average with i lags MMi is equal to View the MathML source. One is computed over the long-term L, the other on a short timeframe s. If MMs crosses MML from the top to the bottom, technical traders will predict a further decrease in stock prices and try to sell their holdings immediately. Alternatively, if these moving averages cross from the bottom to the top, the signal will be interpreted as buy signal. In Fig. 5 we generated such signals using the same data as previously; we also computed portfolios managed with respect to the signals. For this purpose the artificial investor is endowed with an amount of cash equal to the DJI value at date 1 (974.40). Note that the moving averages strategy provides an example of the “rules of the game” presented in Section 2. Concerning the signals subfigures, we present a limited time window for graphical clarity. The portfolio subfigures report the evolution of an investor's wealth using these signals in context of 0% transaction costs.In Fig. 4, MMs is based on 10 days while MML is based on 90 days. With these values we can generate 135 signals in the complete time window, which delivers the portfolio evolution. In Fig. 4, these moving averages are respectively based on 5 and 20 trading days that deliver 469 signals. Note that none of these strategies is interesting in any way. One can easily rank these strategies in term of overall profitability: MM10v. s. MM90 seems to perform better than pt + 1 in this price sample since the first delivers an overall profitability of + 299% (terminal value of the portfolio = 3886.36) against + 70% for the second (terminal value: 1657.18). One can also measure how far these two strategies are from the optimum S *. In other words, whatever the relative performance of any trading strategy, S * can be used to gauge its absolute performance. In our example, both MM10v. s. MM90 and MM5v. s. MM20 were poorly performing strategies. A simple buy and hold behavior (buying the market at date 1 and selling it at date 7156) performs far better than these two moving average techniques. Nevertheless, one assumes some automatic trading strategies could outperform this B&H strategy, especially in the context of high frequency data. In a similar manner, the literature that deals with the forecasting of future market trends (for example with neural networks, see Motiwalla and Wahab [15], Chen et al. [3], Chen and Leung [2], or with support vector machines, see Huang et al. [9]) is geared at delivering investment tools that can be directly assessed using the same steps. Resolving the S*-determination problem does not determine the signals required by automatic trading systems, nor recommend behavior to any real-world investor. It simply establishes a boundary that was, to the best of our knowledge, largely unknown, and proposes a reference in terms of the maximum-profit trajectory, against which any population of investment trajectories can be gauged. However, the S* should be re-examined to encompass complex strategies developed over a set of financial securities combined in a portfolio. This extension would be far more complex because it raises questions mixing the maximum profit and the level of risk with which any strategy is necessarily associated.