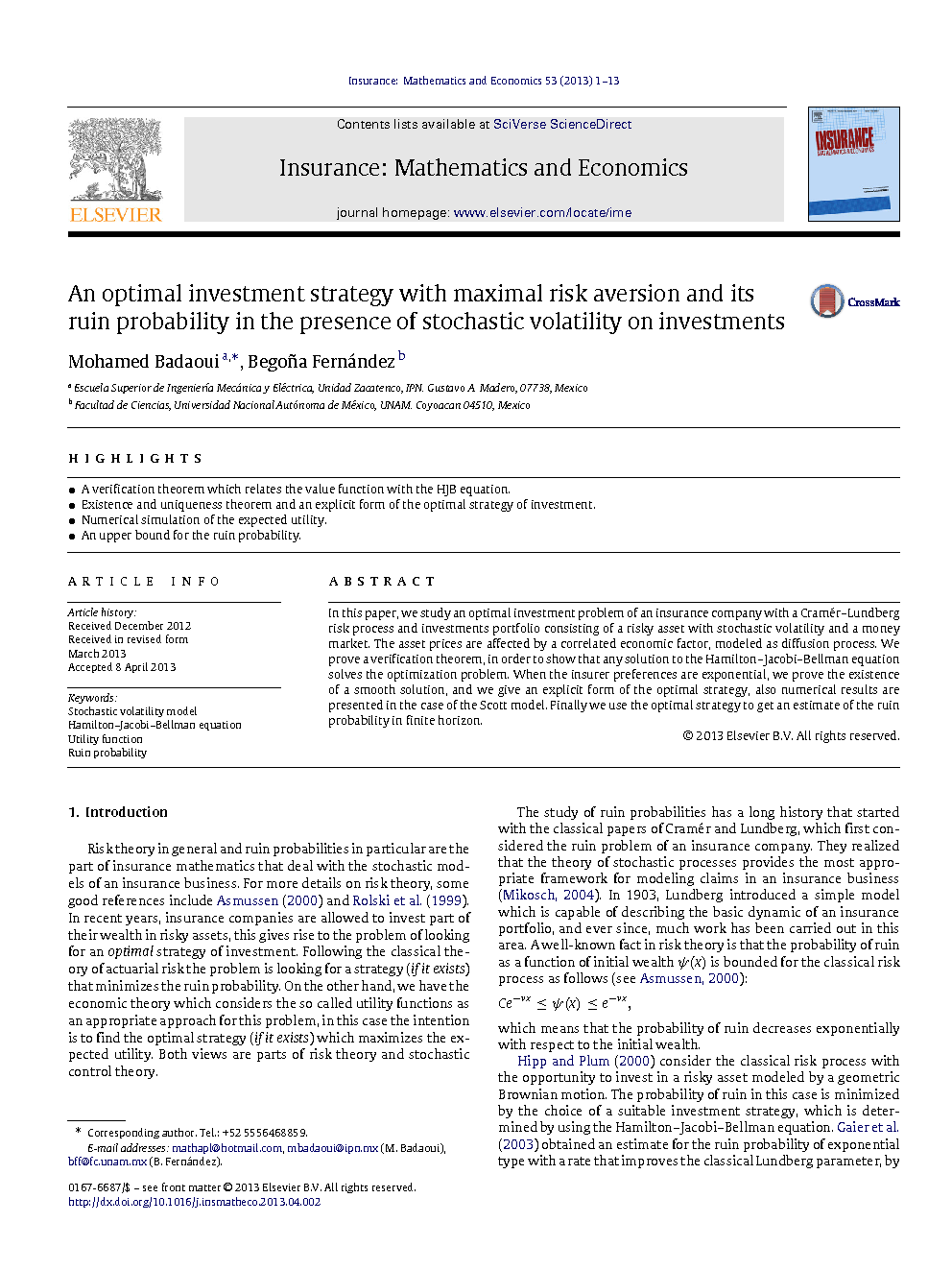 In this paper, we study an optimal investment problem of an insurance company with a Cramér–Lundberg risk process and investments portfolio consisting of a risky asset with stochastic volatility and a money market. The asset prices are affected by a correlated economic factor, modeled as diffusion process. We prove a verification theorem, in order to show that any solution to the Hamilton–Jacobi–Bellman equation solves the optimization problem. When the insurer preferences are exponential, we prove the existence of a smooth solution, and we give an explicit form of the optimal strategy, also numerical results are presented in the case of the Scott model. Finally we use the optimal strategy to get an estimate of the ruin probability in finite horizon.

Risk theory in general and ruin probabilities in particular are the part of insurance mathematics that deal with the stochastic models of an insurance business. For more details on risk theory, some good references include Asmussen (2000) and Rolski et al. (1999). In recent years, insurance companies are allowed to invest part of their wealth in risky assets, this gives rise to the problem of looking for an optimal strategy of investment. Following the classical theory of actuarial risk the problem is looking for a strategy (if it exists) that minimizes the ruin probability. On the other hand, we have the economic theory which considers the so called utility functions as an appropriate approach for this problem, in this case the intention is to find the optimal strategy (if it exists) which maximizes the expected utility. Both views are parts of risk theory and stochastic control theory. The study of ruin probabilities has a long history that started with the classical papers of Cramér and Lundberg, which first considered the ruin problem of an insurance company. They realized that the theory of stochastic processes provides the most appropriate framework for modeling claims in an insurance business (Mikosch, 2004). In 1903, Lundberg introduced a simple model which is capable of describing the basic dynamic of an insurance portfolio, and ever since, much work has been carried out in this area. A well-known fact in risk theory is that the probability of ruin as a function of initial wealth ψ(x) is bounded for the classical risk process as follows (see Asmussen, 2000): Hipp and Plum (2000) consider the classical risk process with the opportunity to invest in a risky asset modeled by a geometric Brownian motion. The probability of ruin in this case is minimized by the choice of a suitable investment strategy, which is determined by using the Hamilton–Jacobi–Bellman equation. Gaier et al. (2003) obtained an estimate for the ruin probability of exponential type with a rate that improves the classical Lundberg parameter, by proposing a strategy that consists in investing a constant amount of money in the risky asset. Hipp and Schmidli (2004) showed that this strategy is asymptotically optimal as the initial wealth tends to infinity. On the other hand, the study of the expected utility function has been very important in both finance and insurance. Ferguson (1965) conjectured that maximizing exponential utility from terminal wealth is strictly related to minimizing the probability of ruin. Ferguson studied the problem of expected utility of wealth under a discrete model for the investor. Browne (1995) verified the Ferguson conjecture for a risk process modeled by a Brownian motion with drift, with the possibility of investment in a risky asset which follows a geometric Brownian motion, but without a risk-free interest rate. He concluded that, the optimal strategy that minimizes the probability of ruin is also optimal in maximizing the exponential utility of terminal wealth. In the presence of a positive interest rate, this equivalence does not hold. Yang and Zhang (2005) considered the classical risk model perturbed by a standard Brownian motion. The insurer is allowed to invest in the money market and a risky asset. They obtained a closed form expression of the optimal strategy when the utility function is exponential. Fernández et al. (2008) considered the risk model with the possibility of investment in the money market and a risky asset modeled by a geometric Brownian motion. Via the Hamilton–Jacobi–Bellman approach, they found the optimal strategy when the insurer’s preferences are exponential. In this case as well, a closed form solution is given. The optimal strategy is then used to get an estimate of the ruin probability. The case in which the claim process is a pure jump process and the insurer has the option of investing in multiple risky assets without the risk-free option was studied by Wang (2007). Wang found that the optimal strategy of maximizing the exponential utility of terminal wealth consists in putting a fixed amount of money in each risky asset, while to get the optimal reinsurance from the ceding company, Guerra and Centeno (2008) studied the relationship between maximizing the adjustment coefficient and maximizing the expected utility of wealth for the exponential utility function. The main purpose of this paper is to extend the results obtained for a geometric Brownian motion in Fernández et al. (2008) to a risky asset with stochastic volatility. Following the same approach as in Fernández et al. (2008), this paper is organized as follows: In Section 2 we introduce the model and the problem of our research. In Section 3, we provide a verification theorem for the optimization problem which relates the value function with the Hamilton–Jacobi–Bellman equation, which is proven by using martingale theory and Itô’s formula. In Section 4, for ρ=0 we prove an existence and uniqueness theorem when the insurer’s preferences are exponential, and we obtain an explicit solution for the partial differential equation (PDE). Consequently, an explicit form for the optimal strategy is obtained, which depends only on the external factor and time. In Section 5 we develop some numerical results, we prove consistency and stability of the explicit scheme. The well-posedness of the Cauchy problem is proven to complete the conditions of the Lax theorem for convergence. We present results for the Scott model when claim-size is exponentially distributed. In Section 6 we study the reserve of the insurance company under the optimal strategy, and we prove a supermartingale property of the risk process to get an upper bound for the ruin probability in finite horizon. In the Appendix we give some results about Partial Differential Equations and Stochastic Differential Equations.