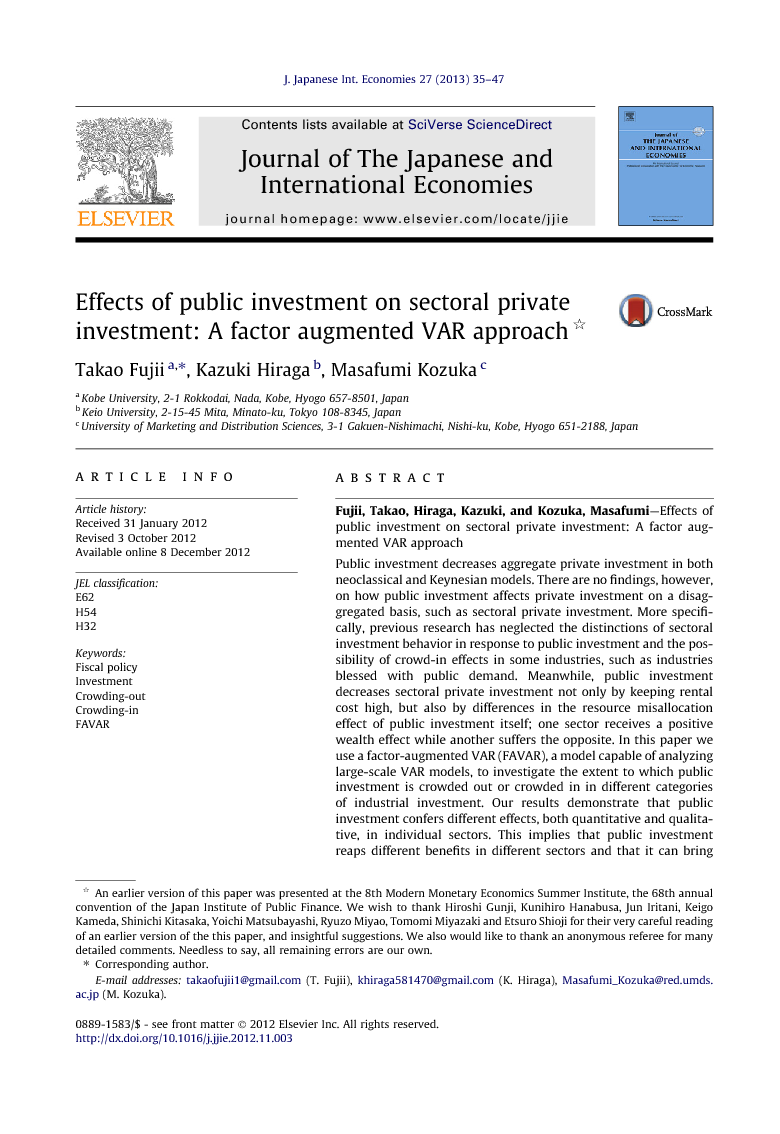 Capital investment affects not only the supply side via capital accumulation in the long run, but also the demand side in the short run. This is known as the “duality of investment”. The relatively high fluctuation and instability of capital investment in Japan affects the business cycle.1There are several papers which insist that capital investment is relevant to Japan’s “lost decade”. Hori et al., 2006 and Hayashi, 2007, for example, implicate capital investment stagnation as one of the main causes of this lost decade. Using data from the pre- and middle-bubble period (1980–1991) and post-bubble period (1991–2003), Horioka (2007) points to capital investment stagnation as a principal cause of the lost decade and analyzes its relation to economic growth and the contribution rates of GDP components. Numerous studies in capital investment in relation to fiscal policy, and to the crowding out problem, have long been developed since Smith (1776). Under the present circumstances, this is a critical issue. As stated by Fukuda et al. (2011), beginning in mid-2007, major countries in the world introduced aggressive fiscal policy in response to the global financial crisis. As a result, they ran huge budget deficits. In addition, long term interest rates in countries such as Greece and Spain rose dramatically because of sovereign risk (see e.g., Laubach (2010)). Furthermore, though we cannot observe the increase in the long-term interest rate now, the situation in Japan is critical. As stated by Doi et al. (2011) and other papers, the Japanese public debt exceeds Italy’s and is currently the highest among the G7 countries.2 These circumstances suggest the possibility of revealing the crowding-out problem. Public investment crowds out aggregate private investment, following both the transitional neoclassical and Keynesian models. Voss (2002) uses a structural VAR model to show that government spending decreases private investment. In contrast, findings from Aschauer, 1989a and Aschauer, 1989b show the opposite effect.3 These papers fail, however, to analyze the transitional sectoral private investment, which responds differently to additional public investment from sector to sector. The construction sector, for example, often receives orders from government to construct public capital such as roadways, bridges, and dams, while the service industry ordinarily receives no direct orders from government at all. Differences of this type cause differences of investment behavior. In light of the above, this study investigates the dynamic response of sectoral capital investment to public investment. Large-scale variables are analyzed by the factor-augmented VAR (FAVAR) model, a dynamic factor model that allows us to analyze VAR models even when the independent variables are too numerous for the sample size. Estimations by FAVAR combine factor analysis with VAR containing factor loadings and policy variables, which allows us to decrease the variables within the VAR and obtain the large-scale information necessary to introduce many independent variables. FAVAR can also contain variables that include expectations, such as stock prices, and thus compensate for the often criticized weakness of VAR, its lack of forward-looking components. Several papers have been published on sectoral capital investment behavior in response to fiscal policy. When Nekarda and Ramey (2011) compare which type of model, neoclassical or New Keynesian, is more consistent with the use of industrial panel data, they conclude that the former is better. Hamaaki (2008) inspects the effects of Japanese tax reform on sectoral capital investment by estimating the capital investment function. None of these studies, however, succeed in analyzing the dynamic behavior of capital investment. Turning to the dynamic behavior of capital investment, we can cite Pereira (2001), Pereira and Andraz, 2003 and Annala et al., 2008(ABF) and Forni and Gambetti (2010). Pereira Alfredo M., 2001 and Pereira and Andraz, 2003 analyze the dynamic behavior of sectoral capital investment in response to public investment using a VAR model containing only those variables. ABF investigate the effects of public infrastructure, which is nearly equal to public investment, on sectoral output, private capital, and employment using vector error correction model (VECM) in Japan. ABF reports both crowding-in-and-out effect of private capital. Forni and Gambetti (2010) analyze the dynamic behavior of aggregate capital investment in response to public investment using a FAVAR model. This paper combines these two approaches. The FAVAR model was first proposed by Bernanke et al. (2005). Many papers since have used FAVAR to analyze the effects of monetary policy shock in data-rich environments. Only a few studies, however, have used FAVAR to analyze the effects of fiscal policy, and to our knowledge none have utilized FAVAR to analyze sectoral investment. In this paper, we perform the first attempt to empirically analyze Japanese fiscal policy with FAVAR, and investigate the relationship between government spending and sectoral investment. The FAVAR model allows us to obtain the dynamic response of sectoral capital investment to public investment and yields markedly different quantitative and qualitative results. We can cite four reasons for this. First, the difference arises from the persistence of public investment. Second, differences in production externalities alter the dynamic response of sectoral capital investment to public investment, both quantitatively and qualitatively. Third, the ripple effect of public investment differs from sector to sector, as mentioned before.4 Lastly, FAVAR model enables us to consider comprehensive effects of shocks; such as intra-sectoral effect to public investment shock because FAVAR model can involve both macroeconomics variables the policymaker observes and all of sectoral variables.5 The remainder of this paper is structured as follows. In Section 2 we describe the FAVAR model used for the estimation. In Section 3 we show the estimation results and give interpretations. In Section 4 we summarize our findings and conclude.