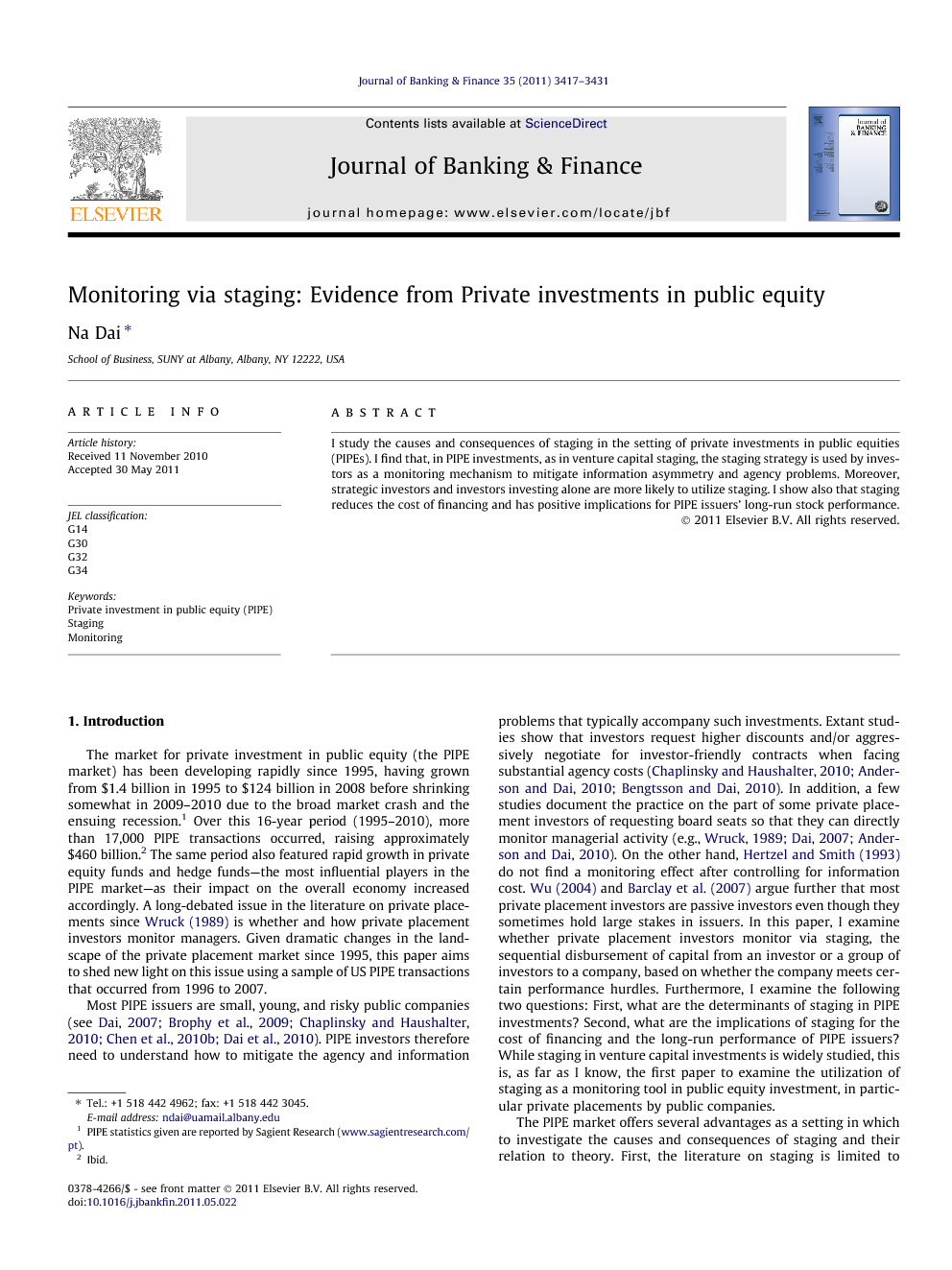 I study the causes and consequences of staging in the setting of private investments in public equities (PIPEs). I find that, in PIPE investments, as in venture capital staging, the staging strategy is used by investors as a monitoring mechanism to mitigate information asymmetry and agency problems. Moreover, strategic investors and investors investing alone are more likely to utilize staging. I show also that staging reduces the cost of financing and has positive implications for PIPE issuers’ long-run stock performance.

I study the causes and consequences of staging in the setting of private investments in public equities (PIPEs). The main findings of this paper are as follows. First, agency costs of the issuing firms increase the probability of staged financing and the frequency of staging, while decreasing the total financing and investment size per round. Second, strategic investors, such as VC/PE funds and corporations, are more likely to enforce staging. Furthermore, investors are more likely to utilize staging when they are investing alone. These findings support the notion that staging is a supplemental monitoring mechanism that investors use to control agency and information problems, as predicted in several theoretical studies (Sahlman, 1990, Hellman, 1994, Neher, 1999, Cornelli and Yosha, 2003, Wang and Zhou, 2004 and Yerramilli, 2008) and documented in empirical studies on venture capital staging (Gompers, 1995, Krohmer et al., 2009 and Tian, 2011). Second, I show that staging is associated with lower PIPE discounts and therefore with the cost of financing for issuing firms. Firms with greater agency costs typically are more likely to be charged steeper discounts, as shown in Dai, 2007 and Chaplinsky and Haushalter, 2010, and Dai et al. (2010). Staging helps mitigate agency and information problems and thus reduces the cost of financing for these firms. Third, the paper shows that firms with staged financing achieve significantly better long-run stock performance than do their single-round peers. This evidence is consistent with the findings of Gompers, 1995 and Krohmer et al., 2009, and Tian (2011), which examine staging in venture capital investments. These findings have important implications regarding the role of PIPE investors and the debate about whether PIPEs represent a faulty investment tool that allows investors to expropriate value from PIPE issuers. I show that, in addition to direct control (such as voting rights and board seats) and contractual protections, PIPE investors often use staging as an additional monitoring tool to mitigate agency and information asymmetry problems, which are rather severe in PIPE investments. This aspect of investor monitoring is, nevertheless, largely neglected in the extant literature on private placements and PIPEs, which potentially leads to an underestimation of the activist role of private placement investors. Furthermore, the finding that issuers offering staged financing experience positive long-run stock performance stands in contrast to the prevailing evidence that PIPE issuers, on average, substantially underperform relative to the market. This finding points to a need to study heterogeneity in PIPE structures when judging the social welfare of the PIPE investment tool.