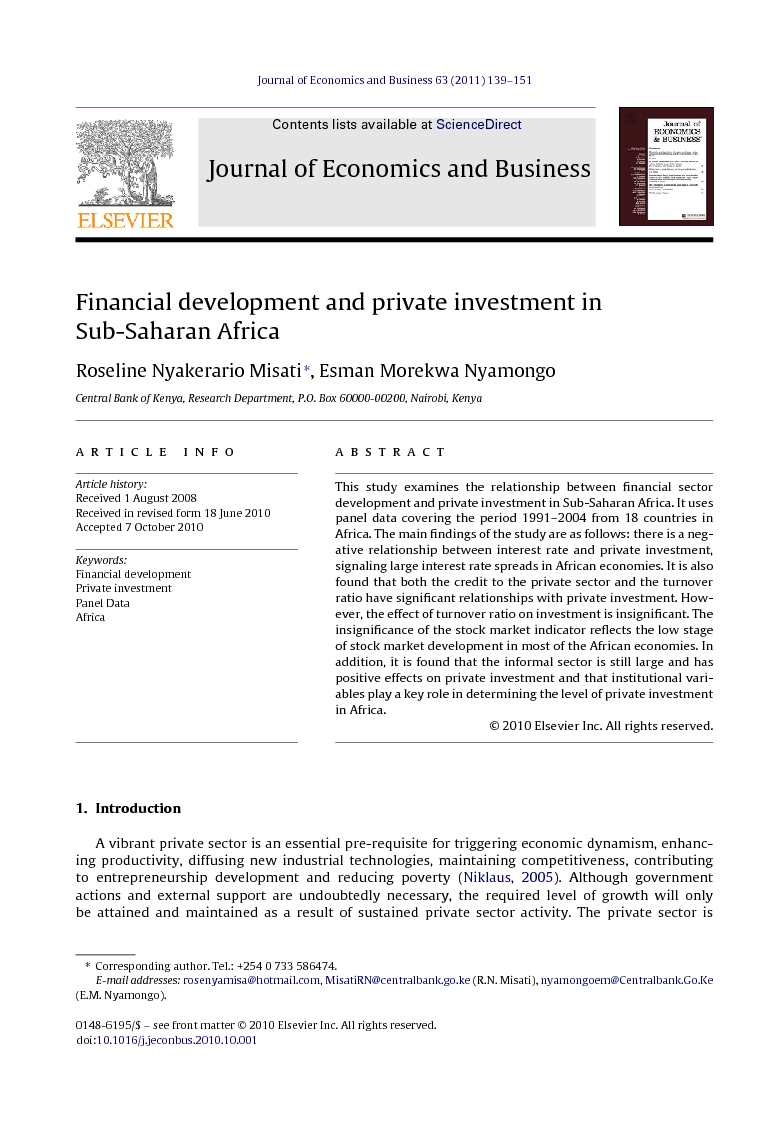 A vibrant private sector is an essential pre-requisite for triggering economic dynamism, enhancing productivity, diffusing new industrial technologies, maintaining competitiveness, contributing to entrepreneurship development and reducing poverty (Niklaus, 2005). Although government actions and external support are undoubtedly necessary, the required level of growth will only be attained and maintained as a result of sustained private sector activity. The private sector is known to generate wealth to stimulate growth, revenue to improve public services, and employment to lift people out of poverty. However, the degree to which the private sector contributes to growth and poverty alleviation greatly depends on its ability to gain access to critical financial services. The financial sector in most African countries has been rapidly developing, particularly after the 1990s when these economies adopted reforms in the financial sector. Consequently, both the banking sector and capital markets have grown substantially in most African countries in the last decade. The menu of offered financial instruments has expanded in the 1990s compared to the 1980s both in the banking and capital market sectors. The development efforts in both sectors have been complemented by the dynamism in the ICT sector, leading to expansion in the number innovative financial products in a number of African countries. Whether these developments in the financial sector contributed in any way to growth of the private investment in Africa is an empirical question. Substantial theoretical literature dating back to Bagehot (1873), Hicks (1969)Schumpeter (1911), McKinnon (1973) and Shaw (1973) places significant importance on the positive contributions of financial systems to investment and economic growth. According to this literature, financial instruments, markets and institutions arise to ameliorate the effects of information asymmetry, enforcement and transaction costs, which in turn, influences saving rates, investment decisions, technological innovations and steady-state growth rates. Here it is recognized that well functioning financial systems ease external financial constraints that impede firm and industrial expansion and hence growth (Acharya et al., 2009, Boyd and Prescott, 1986, Burcu, 2009, Greenwood and Jovanovic, 1990, King and Levine, 1993a, King and Levine, 1993b and Levine, 1997). Other authors argue that the existence of well-functioning financial market institutions is a fundamental vehicle for local and international sources of finance necessary for facilitating economic growth. In this respect, financial markets are viewed as an essential part of the engine that generates growth and development, through risk diversification, corporate governance enhancement, provision of information, mobilisation and pooling of savings and facilitation growth (Bencivenga et al., 1996, Devereux and Smith, 1994, Irving, 2000, King and Levine, 1993a, Levine and Zervos, 1996, Obstfeld, 1994, Levine and Zervos, 1996, Levine and Zervos, 1998, Saint-Paul, 1992, Senbet and Otchere, 2005 and Shleifer and Vishny, 1995). However, most of the available evidence on this area of research has to a large extent ignored the link between financial development and private investment and instead concentrated on the effects of financial development on economic growth. The objective of resource mobilisation through the financial intermediaries and capital market development is geared towards provision of finance for private investment which is in conformity with theoretical postulations that financial development first impacts capital formation or investment, then it is translated into economic growth. In the literature, few, if any, studies have focused on this transmission mechanism. This issue is important because theory does not provide clear predictions on the sign of the relationship between financial development and investment. Gregorio and Guidotti (1995) have argued that one area of controversy in the finance-investment literature concerns the channel of transmission mechanism from financial development to growth. While some studies find support for the McKinnon (1973) and Shaw (1973) proposition, which identifies a positive relationship from financial deepening to investment; others conclude that there is no clear relationship between financial development, savings and investment. Furthermore, most of the studies in this area mainly focus on high-income and middle-income developing countries with little reference to African economies. Even among the few studies focusing on Africa no clear partitioning of the role played by the financial development via the stock market and the banking sector is evident. These studies assume that the two sub-sectors play complementary roles to investment and growth when it is possible that they may be substitutes. Studies we have seen in this area either explore the linkage between the banking sector and growth or the stock market and growth. The studies on Africa focusing on stock markets are qualitative in nature; the few that are quantitative in nature such as by Agarwal (1999) have limited scope of countries and period. This particular study focuses on growth while ignoring the relationship between stock market development and investment. Although Ndikumana (2000) focuses on investment, the study concentrates on the banking indicators of the financial system. The study is organised as follows. The next section provides trend analysis of financial sector variables and private investment. The theoretical framework and methodology is provided in Section 3. Section 4 provides analysis of the empirical results while Section 5 provides conclusions and policy implications.

This study explores the relationship between financial sector development and private investment. It uses panel data covering the period 1991–2004 from 18 countries in Africa. The study establishes a negative relationship between interest rate on deposits and private investment, signaling the presence of huge interest rate spreads in African economies. In addition, a positive relationship between both the credit to the private sector and the turnover ratio and private investment is found. However, the effect of turnover ratio on investment is insignificant. The insignificance of the stock market indicator is important to us as it reflects the low stage of stock market development in most of the African economies. The results also point out that despite two decades of reforms, the informal sector is still large and has positive effects on private investment. It is also found that those institutional factors represented by the corruption perception index, checks and balances and the index of the economic freedom have a role to play in driving private investment in Africa. On the basis of these findings it is recommended that, first, African countries explore the possibility of fast tracking efforts of integrating stock market in these economies rather than encouraging individual development of stock exchanges. This effort would improve liquidity, efficiency, and competitiveness and thus enhance the capacity to mobilise capital for investment in these economies. Second, in order to realise the full benefits of financial liberalisation, measures to strengthen the quality of institutions in these economies are crucial. Third, there is need for emphasis of integration and support strategies of the informal sector into mainstream policy making in the African economies. Policies are therefore needed to provide a better link between the formal and the informal sectors to exploit their comparative advantages and specialisation.