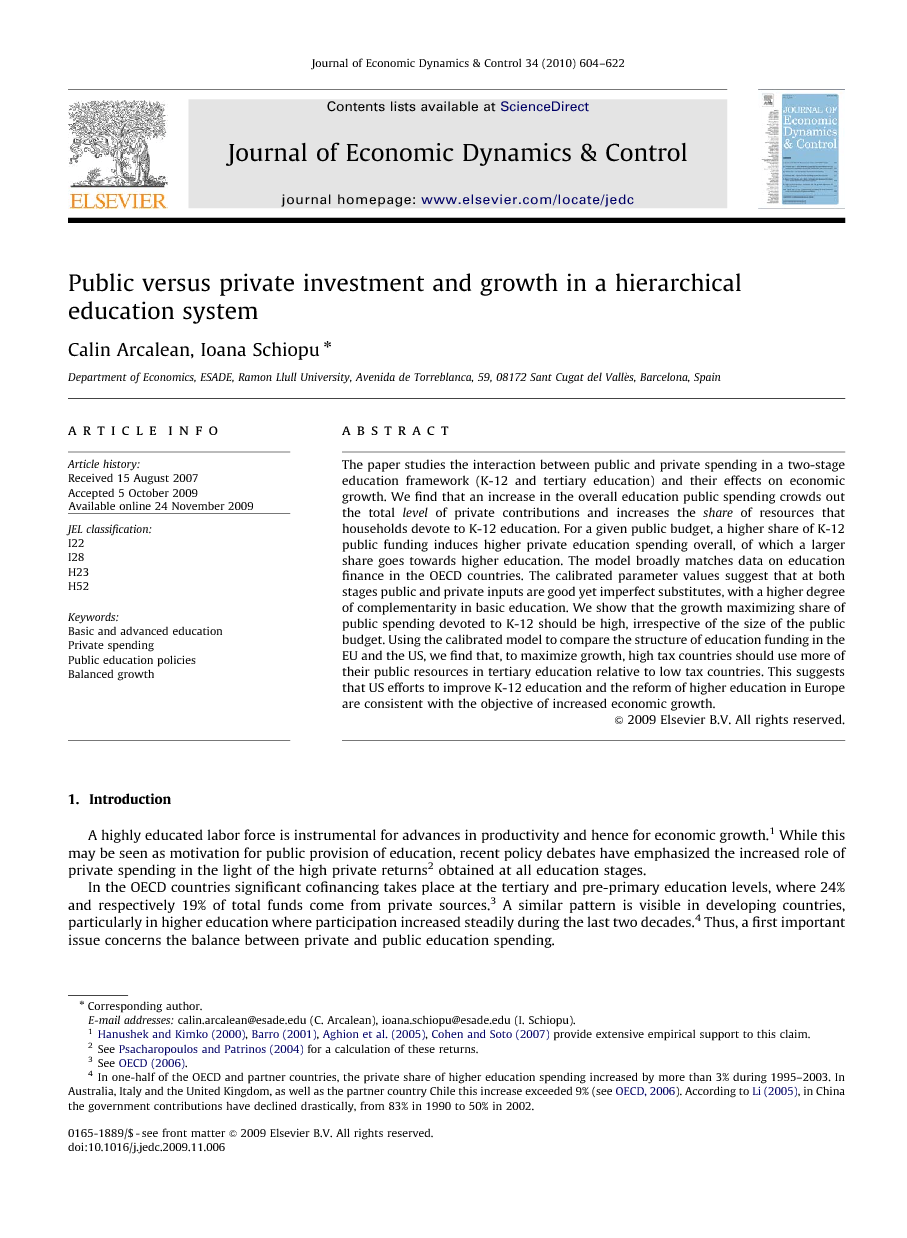 The paper studies the interaction between public and private spending in a two-stage education framework (K-12 and tertiary education) and their effects on economic growth. We find that an increase in the overall education public spending crowds out the total level of private contributions and increases the share of resources that households devote to K-12 education. For a given public budget, a higher share of K-12 public funding induces higher private education spending overall, of which a larger share goes towards higher education. The model broadly matches data on education finance in the OECD countries. The calibrated parameter values suggest that at both stages public and private inputs are good yet imperfect substitutes, with a higher degree of complementarity in basic education. We show that the growth maximizing share of public spending devoted to K-12 should be high, irrespective of the size of the public budget. Using the calibrated model to compare the structure of education funding in the EU and the US, we find that, to maximize growth, high tax countries should use more of their public resources in tertiary education relative to low tax countries. This suggests that US efforts to improve K-12 education and the reform of higher education in Europe are consistent with the objective of increased economic growth.

A highly educated labor force is instrumental for advances in productivity and hence for economic growth.1 While this may be seen as motivation for public provision of education, recent policy debates have emphasized the increased role of private spending in the light of the high private returns2 obtained at all education stages. In the OECD countries significant cofinancing takes place at the tertiary and pre-primary education levels, where 24% and respectively 19% of total funds come from private sources.3 A similar pattern is visible in developing countries, particularly in higher education where participation increased steadily during the last two decades.4 Thus, a first important issue concerns the balance between private and public education spending. On the other hand, technological progress has emphasized the distinction between general skills (acquired during primary and secondary school) and specialized skills (produced during tertiary education), adding another layer of complexity to the problem of education finance. Thus, not only the size, but also the composition of both private and public spending across instruction stages becomes a critical policy issue. The discussion is further complicated by the hierarchical nature of education since the attained quality of basic skills is crucial for the returns of more advanced education. This paper analyzes the multiple funding trade-offs associated with basic (K-12) and advanced (tertiary) education stages. It focuses on the following questions: How do governments and households allocate resources across different education stages? How do private and public education expenditures interact, in the aggregate and at each stage? What are the implications of various education public policies on the quality of human capital and consequently, on the growth rate of the economy? Within the abundant literature on growth and human capital accumulation,5 the interaction between public funding policies and private spending across education stages has received relatively little attention. While a number of papers have recently begun to investigate the investment in hierarchical human capital,6 most of them look at simplified financing schemes in which some of the stages are funded exclusively by private or public funds. Moreover, they usually consider, counterfactually, perfect substitution between skilled and unskilled labor, thus removing from the analysis important general equilibrium factors that shape education funding. This paper contributes to the literature by providing a simple model of hierarchical education that incorporates government funding of both basic and advanced instruction as well as households’ optimal decisions with respect to enrollment, overall education spending and its allocation across stages. Furthermore, their interaction is embedded in a dynamic general equilibrium model of a production economy which employs high and low skilled workers as providers of distinct labor services. To maintain generality, we assume that education quality at each stage is produced with a CES (constant elasticity of substitution) aggregator of private and public inputs. This simplification enables us to circumvent modelling the institutional details that make the education systems in various countries so different, and hence so difficult to fit in one analytical framework. The key parameters of the model are calibrated to match data on education finance in the OECD. The resulting values suggest that at both stages public and private inputs are good yet imperfect substitutes, with basic education showing a higher degree of complementarity. The main findings are summarized below. (1)Consistent with data for OECD countries, the pursuit of growth-maximizing policies necessitates the share allocated to K-12 education to be predominant (above 70%) in the public spending on education, irrespective of the total public education budget size. (2)Shifting public resources from tertiary into primary and secondary education increases the total household spending for education and more importantly, the share of private spending allocated to tertiary education. (3)Increasing enrollment at the advanced stage of education does not always translate into higher growth, when it comes at the expense of decreasing the resources allocated to the basic stage.(4)Flat income tax levels have noticeable effects on the output growth rate as they affect the private incentives to invest in education.7 In particular, an increase in taxes diminishes the private resources allocated to education and biases their composition toward K-12 stage, where the return on investment is higher, due to enhanced complementarity between public and private spending. Consequently, growth-maximizing policies in a high-tax country imply a higher share of public spending allocated to higher education. (5)Given the observed differences in tax and funding levels in the US versus EU, our model suggests that an increase in the share of public funds allocated to K-12 in the US and enhanced public funding for tertiary education in the EU would stimulate economic growth in these economies, respectively. The paper is structured as follows. Section 2 presents the model and also derives analytical results under particular assumptions regarding the substitution between private and public inputs in the human capital production functions. In Section 3 we study the effects of changes in the policy parameters on private resource allocations across the two education stages. Section 4 relaxes the assumptions in Section 2 and undertakes computational analysis of the general model. Section 5 looks at the growth-maximizing policies when government takes into account households’ decision rules as functions of public policies parameters using the numerical results. Section 6 uses the model to examine the link between education funding, taxation and economic performance in the US and EU and derives some policy recommendations. Section 7 concludes. All proofs are in Appendix A.

Improving education quality figures high on political agendas everywhere. In particular, higher education competitiveness has been receiving a lot of attention during last decade. While more public funding is often touted as a panacea, the (dis)incentives for private investment should be given careful consideration. In this paper we study the channels through which public spending triggers private responses in education funding across different education stages (basic vs. advanced). The great diversity of education systems across countries, mainly with respect to the source of spending and the ownership of institutions, makes a general analysis difficult. We have tried to encompass the institutional variety by postulating very general production functions for human capital, in order to focus on the interplay between private and public education finance. The elasticity of substitution between private and public inputs at each stage is crucial for the analysis. We accompany our analytical results, obtained from a simplified version of the model, with a quantitative analysis of the more general framework, calibrated to broadly match data on education finance from OECD countries. The paper emphasizes the complementarities between private and public spending in financing education at different levels and studies their effects on attainment and economic growth. In particular, the United States and the European Union are used to illustrate the role of taxation in shaping private and public allocations and to determine how growth maximizing policies change across economic environments. Education policies are very concerned with inequality and access to schooling. We do not explicitly address this issue here. An extended analysis using a heterogenous agent framework would allow for a more detailed description of the interaction between stages (by incorporating an admission threshold at the later stage) or type of public spending (means-tested aid, merit-based subsidies). Such a framework would also make possible a welfare comparison of the various funding schemes. We leave all these extensions for future research.