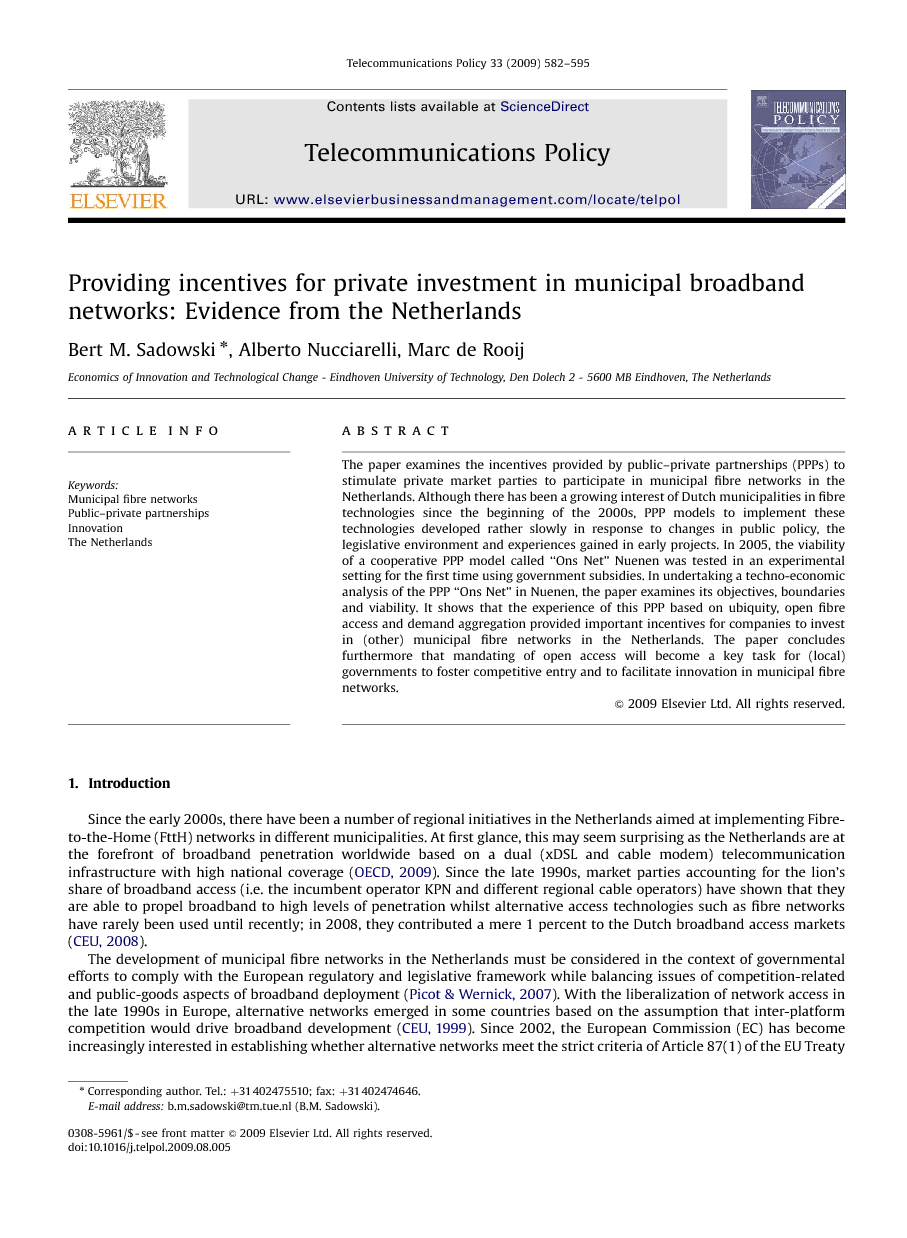 The paper examines the incentives provided by public–private partnerships (PPPs) to stimulate private market parties to participate in municipal fibre networks in the Netherlands. Although there has been a growing interest of Dutch municipalities in fibre technologies since the beginning of the 2000s, PPP models to implement these technologies developed rather slowly in response to changes in public policy, the legislative environment and experiences gained in early projects. In 2005, the viability of a cooperative PPP model called “Ons Net” Nuenen was tested in an experimental setting for the first time using government subsidies. In undertaking a techno-economic analysis of the PPP “Ons Net” in Nuenen, the paper examines its objectives, boundaries and viability. It shows that the experience of this PPP based on ubiquity, open fibre access and demand aggregation provided important incentives for companies to invest in (other) municipal fibre networks in the Netherlands. The paper concludes furthermore that mandating of open access will become a key task for (local) governments to foster competitive entry and to facilitate innovation in municipal fibre networks.

Since the early 2000s, there have been a number of regional initiatives in the Netherlands aimed at implementing Fibre-to-the-Home (FttH) networks in different municipalities. At first glance, this may seem surprising as the Netherlands are at the forefront of broadband penetration worldwide based on a dual (xDSL and cable modem) telecommunication infrastructure with high national coverage (OECD, 2009). Since the late 1990s, market parties accounting for the lion's share of broadband access (i.e. the incumbent operator KPN and different regional cable operators) have shown that they are able to propel broadband to high levels of penetration whilst alternative access technologies such as fibre networks have rarely been used until recently; in 2008, they contributed a mere 1 percent to the Dutch broadband access markets (CEU, 2008). The development of municipal fibre networks in the Netherlands must be considered in the context of governmental efforts to comply with the European regulatory and legislative framework while balancing issues of competition-related and public-goods aspects of broadband deployment (Picot & Wernick, 2007). With the liberalization of network access in the late 1990s in Europe, alternative networks emerged in some countries based on the assumption that inter-platform competition would drive broadband development (CEU, 1999). Since 2002, the European Commission (EC) has become increasingly interested in establishing whether alternative networks meet the strict criteria of Article 87(1) of the EU Treaty on State Aid and if they interfere with competition. Exceptions have been granted if the implementation of the network was driven by public policy objectives related to the provision of basic infrastructure needs or to the expansion of networks in areas in which private investment was considered inadequate. In addition, public policy objectives have been put forward if these networks were considered as part of structural measures within the EU or as a way to facilitate the European drive towards achieving the goals of the Lisbon Agenda. In this context, public–private partnerships (PPPs) are considered an alternative means of implementing municipal fibre networks, combining public objectives and private interests whilst at the same time complying with the regulatory and legislative framework of the EC (Falch & Henten, 2008). In the case of fibre technologies, risks for private investment—caused by high capital expenditure in conjunction with demand uncertainty—can lead to a situation in which markets fail to efficiently provide society with fibre infrastructure (OECD, 2008). In contrast to direct government intervention, PPPs offer alternative funding mechanisms to account for these risks and to mitigate market failure (Falch & Henten, 2008). PPPs represent an alternative mechanism for implementing fibre infrastructure in the whole community (e.g. by balancing private and public policy objectives), for facilitating competitive entry at different layers of the network (e.g. by weighting open against closed access options) and for improving viability of the business model (e.g. by reducing demand uncertainty). In the Netherlands, municipalities such as Amsterdam, Rotterdam or Eindhoven started in 2001 looking for alternative ways of implementing municipal broadband networks after national broadband initiatives failed to create sufficient commitment by existing market parties. In parallel to this, in 2002, the Dutch Ministry of Economic Affairs began to look for alternative ways of re-starting investment in telecommunication infrastructures and set up a national research and development (R&D) programme called “Kenniswijk” (Knowledge District) the aim of which was to develop “a consumer market of the future” (Kenniswijk, 2005). In 2005 in Nuenen and 2006 in Eindhoven, cooperative PPPs called “Ons Net” (Our Network) were set up, subsidized by the “Kenniswijk” programme which competed with established market parties on a regional level. These PPPs were unique as they represented local experimentation and testing systems, i.e. real life experimentation environments in which (end) users are also co-producers (Ballon, Pierson, & Delaere, 2007; EU, 2009). These systems allowed different actors (i.e., semi-public institutions, local governments, private companies) involved to experiment with and learn from the implementation of new infrastructure and services and, subsequently, to use these experiences for the start-up and execution of new projects. In this paper, the techno-economic analysis focuses on the objectives, the network boundaries and the viability of PPPs facilitating municipal fibre networks in the Netherlands. In this way, the paper contributes to the discussion on a different public utility vision emerging during the implementation of municipal fibre networks in the Netherlands-based on ubiquity, open access and demand aggregation.

The paper shows that the changes in public policy, juridical procedures and legislative changes since the 2000s, specific forms of public–private partnerships as alternative forms of investment in municipal fibre networks have developed in the Netherlands in which social housing corporations have become a vital part. By participating in these PPPs, Dutch municipalities have shown that they are able to foster these networks even in “black areas”, i.e. zones with at least two competing infrastructures. The paper further demonstrates that government subsidies aimed at experimenting with and learning from the implementation of new fibre infrastructure and services can foster municipal network growth. Experiences with the Nuenen network generated not only knowledge about the process of implementing municipal networks (like minimum levels of households connected), but also about successful implementation mechanisms and emerging problems during implementation. The cooperative character of the PPP (called “Ons Net”) responsible for the municipal network in Nuenen provided for a number of these mechanisms. For example, “Ons Net” reduced the commercial risk of municipal fibre installations through intensive user involvement. However, the cooperative form of the PPP allowed also strategic behaviour of stakeholders. With the transformation of the cooperative PPP model into a sole private provider model in 2006, the options for competitive service supply in the Nuenen network have decreased. As long as most of the municipal fibre network initiatives in the Netherlands were fostered by private installation firms like Reggefiber, the regulatory and legislative framework seemed appropriate as these networks stimulated access competition. With the approval of the joint venture between Reggefiber and KPN by the Dutch Competition Authority in December 2008, this situation has changed as KPN has been considered as a market party holding significant market power (SMP) in broadband access markets.33 As a result, the regulatory agency OPTA is discussing new guidelines for unbundling fibre access34 and has started a consultation process in April 2009. In addition, the obligation of KPN under the universal service regulation to provide a “defined minimum set of services to all end-users at an affordable price”35 has (provisionally) been defined for areas with fibre only access.36 Even if it obliged KPN to provide a fibre-based telephony service at similar tariff conditions compared to a copper-based telephony services, it did not account for customer choice (like customer pre-select). The experience in the Netherlands has shown that there is a case for involving local governments and semi-public institutions (like social housing corporations) in a market-based fashion to implement municipal fibre networks even in black areas (with pre-existing broadband infrastructure). With its recent consultation document,37 the European Commission provides a first step in precisely defining a common framework for this kind of interventions based on the European State Aid rules. It categorizes more accurately different geographical areas (white, grey and black) and attempts to define next generation networks on the basis of a higher speed than previous documents.38 As the document tries to identify the relevant competition-related aspects of municipal fibre networks, it stops short in defining open fibre access on the wholesale basis as ODF access39and for subscribers as SDF40 access. If open access at these levels is not clearly defined, there is the threat that competitive service providers will not enter and service level competition will not emerge as the example of “Ons Net” Nuenen currently shows. This also creates barriers to the entry of new innovative service providers which are the basis for the development of the full potential of municipal fibre networks. With respect to the public goods aspects of municipal fibre networks, there currently is not a clear answer to the question how fibre access is related to public service obligations like universal service. Municipalities and social housing corporations in the Netherlands have taken the lead in defining ubiquity, but issues like affordability of services and choice of service provision have not clearly been defined yet. There are a variety of options under which regulatory agencies and municipalities can guarantee public service obligations ranging from direct interventions to regulate consumer and access prices to defining a municipal fibre network as a service of general economic interest. As there is a threat that vertically integrated market structures will emerge in next generation fibre markets in the Netherlands due to the recent merger between KPN (the incumbent) and the Reggefibre (the new entrant firm with most fibre installations), functional separation can be considered as an instrument to warranty a competitive and open market structure in this market.