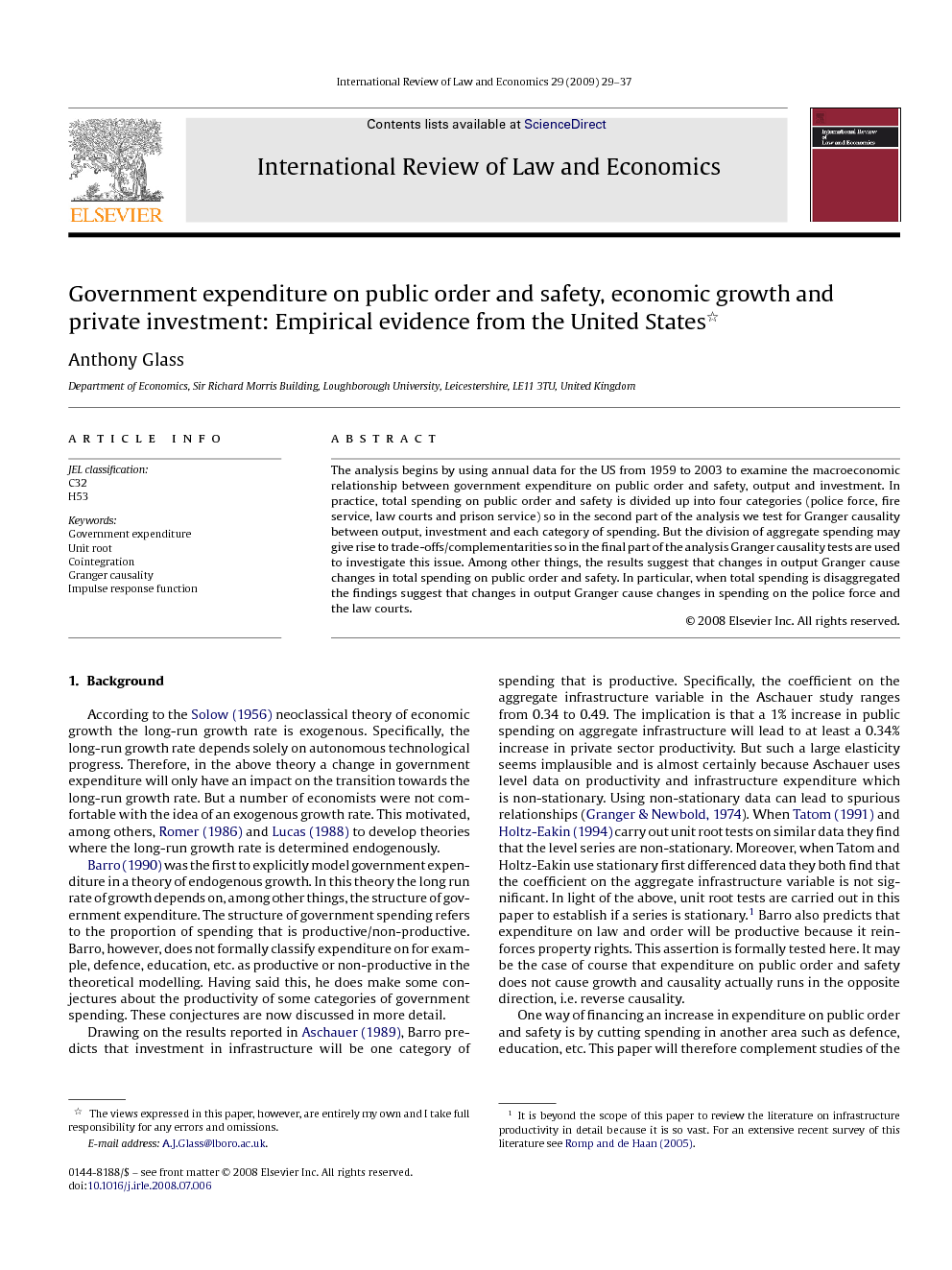 According to the Solow (1956) neoclassical theory of economic growth the long-run growth rate is exogenous. Specifically, the long-run growth rate depends solely on autonomous technological progress. Therefore, in the above theory a change in government expenditure will only have an impact on the transition towards the long-run growth rate. But a number of economists were not comfortable with the idea of an exogenous growth rate. This motivated, among others, Romer (1986) and Lucas (1988) to develop theories where the long-run growth rate is determined endogenously. Barro (1990) was the first to explicitly model government expenditure in a theory of endogenous growth. In this theory the long run rate of growth depends on, among other things, the structure of government expenditure. The structure of government spending refers to the proportion of spending that is productive/non-productive. Barro, however, does not formally classify expenditure on for example, defence, education, etc. as productive or non-productive in the theoretical modelling. Having said this, he does make some conjectures about the productivity of some categories of government spending. These conjectures are now discussed in more detail. Drawing on the results reported in Aschauer (1989), Barro predicts that investment in infrastructure will be one category of spending that is productive. Specifically, the coefficient on the aggregate infrastructure variable in the Aschauer study ranges from 0.34 to 0.49. The implication is that a 1% increase in public spending on aggregate infrastructure will lead to at least a 0.34% increase in private sector productivity. But such a large elasticity seems implausible and is almost certainly because Aschauer uses level data on productivity and infrastructure expenditure which is non-stationary. Using non-stationary data can lead to spurious relationships (Granger & Newbold, 1974). When Tatom (1991) and Holtz-Eakin (1994) carry out unit root tests on similar data they find that the level series are non-stationary. Moreover, when Tatom and Holtz-Eakin use stationary first differenced data they both find that the coefficient on the aggregate infrastructure variable is not significant. In light of the above, unit root tests are carried out in this paper to establish if a series is stationary.1 Barro also predicts that expenditure on law and order will be productive because it reinforces property rights. This assertion is formally tested here. It may be the case of course that expenditure on public order and safety does not cause growth and causality actually runs in the opposite direction, i.e. reverse causality. One way of financing an increase in expenditure on public order and safety is by cutting spending in another area such as defence, education, etc. This paper will therefore complement studies of the relationship between output and other areas of government expenditure, e.g. defence (Dunne & Vougas, 1999; Karagol & Palaz, 2004; Kollias, Naxakis, & Zarangas, 2004), health (Gerdtham & Löthgren, 2000) and transport (Glass, 2008). A brief look at the government expenditure data for the US also highlights why an analysis of the relationship between spending on public order and safety and the macroeconomy is worthwhile. Over the period 1993–2003 there was a 90% increase in government spending on public order and safety in the US. This compares to an increase in government expenditure on defence, education, health and transport of 37%, 75%, 31% and 74%, respectively. Further in this paper, the salient features of the data on government spending on public order and safety are discussed in more detail. All the above studies of the relationship between output and government spending on defence, health and transport test for cointegration, i.e. test for a long-run relationship between two or more variables. This approach is also used here. For the US, Cullison (1993) examines the relationship between economic growth and 21 categories of government spending, one of which is civilian safety.2 He finds that only two categories of government spending have a statistically significant effect on economic growth—education and labour training. But although Cullison fits a vector autoregression (VAR) he does not test for cointegration or reverse causality. In this paper we follow the above study by Glass as opposed to the aforementioned defence and health expenditure papers. This is because the above defence and health papers only analyse the relationship between output and total spending on defence and health. Glass on the other hand analyses the productivity of aggregate transport spending and the productivity of its four constituent parts (waterways, highways, public transit and railways, and aviation).3The direction of any causality between output/investment and total expenditure on public order and safety is investigated in the first part of the empirical analysis. In practice, however, total spending on public order and safety is divided up into four categories: the police force, the fire service, the law courts and the prison service. The direction of any causality between output/investment and each of the above four categories is examined in the second part of the empirical modelling. But there may be trade-offs/complementarities between the four categories which could have implications for output and investment. Typically, studies test for trade-offs/complementarities between defence, health and education expenditures at the aggregate level (Apostolakis, 1992; Davis & Chan, 1990; Deger, 1985; Hess & Mullan, 1988; Yildirim & Sezgin, 2002). In light of this, in the final part of the empirical analysis Granger causality tests are used to establish if there are trade-offs/complementarities at a more disaggregate level. The full layout of the remainder of this paper is as follows. In Section 2 the methodology is briefly described and in Section 3 the salient features of the data set are analysed. The results for the aggregate, disaggregate and trade-off analyses are then presented and discussed in Sections 4, 5 and 6, respectively. Finally, in Section 7 the empirical findings are used to make some recommendations about the allocation of the US government budget.