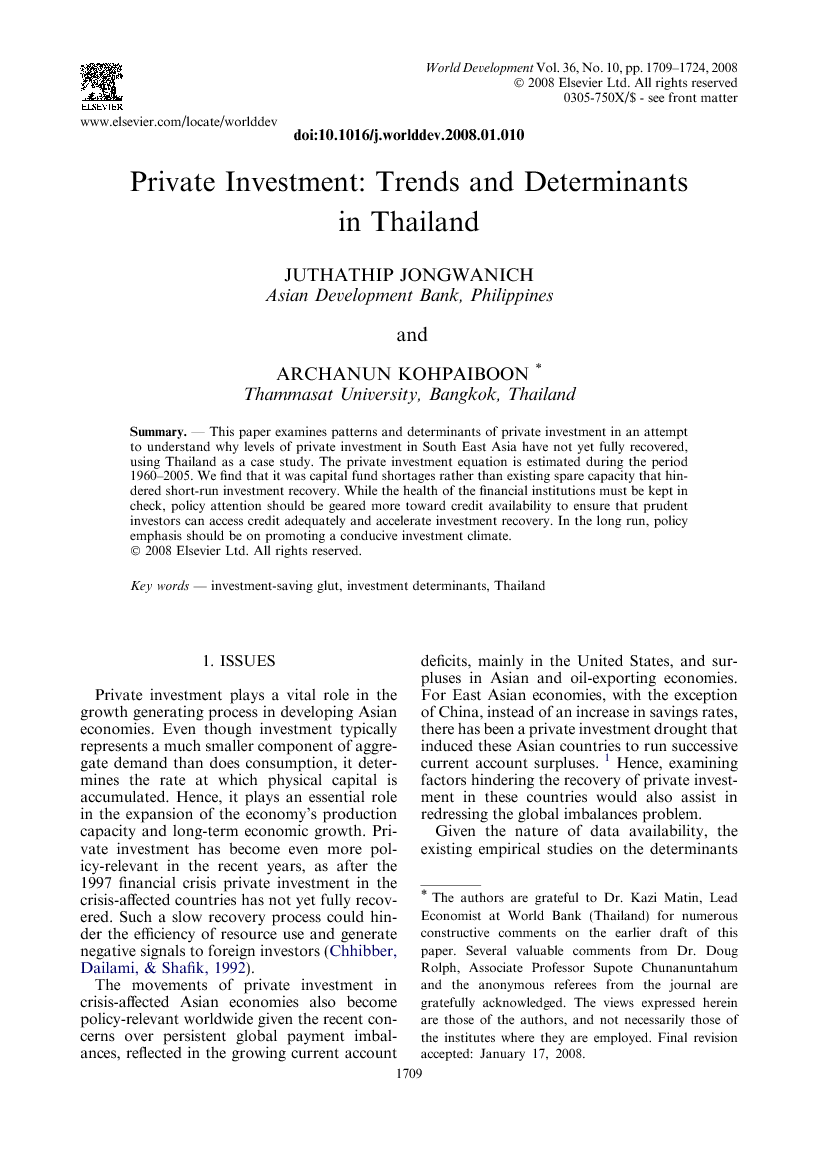 Private investment plays a vital role in the growth generating process in developing Asian economies. Even though investment typically represents a much smaller component of aggregate demand than does consumption, it determines the rate at which physical capital is accumulated. Hence, it plays an essential role in the expansion of the economy’s production capacity and long-term economic growth. Private investment has become even more policy-relevant in the recent years, as after the 1997 financial crisis private investment in the crisis-affected countries has not yet fully recovered. Such a slow recovery process could hinder the efficiency of resource use and generate negative signals to foreign investors (Chhibber, Dailami, & Shafik, 1992). The movements of private investment in crisis-affected Asian economies also become policy-relevant worldwide given the recent concerns over persistent global payment imbalances, reflected in the growing current account deficits, mainly in the United States, and surpluses in Asian and oil-exporting economies. For East Asian economies, with the exception of China, instead of an increase in savings rates, there has been a private investment drought that induced these Asian countries to run successive current account surpluses.1 Hence, examining factors hindering the recovery of private investment in these countries would also assist in redressing the global imbalances problem. Given the nature of data availability, the existing empirical studies on the determinants of private investment, particularly for the developing Asian economies, tend to be dominated by multi-country, cross-sectional, regression analysis.2 The clear fundamental limitation of such an analysis is that it is based on the implicit assumption of “homogeneity” in the observed relationships across countries. This is a very restrictive assumption because there are considerable differences across countries in relation to various structural features and institutional aspects which have a direct bearing on the private investment behavior. In addition, there are also vast differences among countries with respect to the nature and quality of data available, which make any cross-country comparison a rather risky business (Athukorala and Sen, 2002 and Chhibber et al., 1992). This points to the need for an in-depth, time-profile analysis of private investment in an individual country in order to build a sound empirical foundation for informing the policy debate. Unfortunately, systematic single-country studies of this nature are few and far between.3 Therefore, this paper aims to examine patterns and determinants of private investment, using Thailand as a case study. A single equation of private investment determinant is estimated, where a comprehensive set of explanatory variables are well incorporated with a view to understanding the reasons behind private investment still not fully recovering. Thailand is a suitable case study for the subject at hand for three reasons. Firstly, during the past three decades Thailand has exhibited a boom-and-bust cycle in private investment. After the recent 1997 crisis, private investment in Thailand has not fully recovered. Its share of GDP has not only been lower than the average level of the past three decades, but has also been relatively low compared with the other crisis-affected countries in the region. Hence, the analysis of patterns and determinants of private investment in Thailand would not only contribute to the ongoing debate in the policy circles, but would also shed light for other developing countries in designing policy to promote private investment. Secondly, the incomplete recovery of private investment seems to involve several factors, such as real exchange rate depreciation, credit availability, and excess capacity, some of which have theoretically ambiguous effects on investment. Their relative importance is also crucial in forming policy to speed up the investment recovery. Consequently, a systematic empirical analysis is required. Finally, there has not been any systematic and up-to-date study of private investment in Thailand.4 The most recent study was conducted by Mallikamas, Thaicharoen, and Rodpengsangkaha (2003), in which private investment function in Thailand was estimated, but whose results are subject to two serious limitations. The first limitation is that they ignored a number of key variables, that is, public investment and various aspects of economic uncertainty. However, based on the previous studies (i.e., Athukorala and Sen, 2002, Chhibber et al., 1992 and Pattillo, 1998),5 a significant role in determining private investment in the context of the developing countries. Second, the proposed functional form for estimation is problematic. It is based mainly on Tobin’s q theory. However, Tobin’s q theory has met very limited empirical success in the developing countries (Agénor, 2001). This is especially true for Thailand where total capital in the stock market was limited, accounting for only around 7% of the country’s total capital stock during the period 2001–05. The rest of the paper is structured as follows: Section 2 provides an analysis of patterns of private investment in the Thai economy in order to set the stage for the empirical analysis. The analytical framework and the model are presented in Section 3. Time series properties of data and the econometric procedures used are described in Sections 4 and 5, respectively. Section 6 presents and discusses regression results. The final section summarizes the key inferences.

This paper examines the patterns and determinants of private investment in Thailand with a view to understand factors that have hindered its recovery in the post-crisis period. Private investment equations are estimated during the period 1960–2005. The empirical model is based on an extended version of neoclassical investment theory, in which relevant structural features of the developing countries are taken into consideration. The key finding is that private investment in Thailand has borne the brunt of aggregate demand contraction since the outbreak of the Asian financial crisis in 1997. More than 60% of the investment undertaken in the post-crisis period has been for replacement purposes, rather than for expanding production capacity, raising a concern for the country’s long-term growth sustainability. Our regression analysis suggests that in the absence of policy action, private investment would take a long time to dissipate shocks such as the recent crisis. Among the short-run investment determinants (output growth, availability of capital funds, presence of spare capacity, RER, and economic uncertainty), credit shortage was the most important constraint on investment recovery following the crisis. This would be largely due to the approach Thailand pursued in cleaning up the financial system.17 In particular, compared to Malaysia and South Korea, Thailand tended to rely more on market forces (Athukorala, 2001). Hence, the process of restructuring/recapitalization of financial institutions in Thailand was slow and resulted in a credit market freeze. This in turn led to the sluggish investment recovery experienced during the post-crisis period. In the long run, private investment is mostly determined by business opportunities (output growth and RER) and investment costs. Through being highly concentrated on public infrastructure, government investment could have a positive impact on long-term investment in Thailand. Interestingly, the statistical significance of coefficients corresponding to economic uncertainty points to the role of governments in enhancing long-term private investment. Two policy inferences can be drawn from this study. Firstly, while the health of financial institutions must be kept in check, the government should pay more attention toward the credit availability issue to ensure that potential and prudential investors can access credit adequately and help speed up the sluggish investment recovery. This is of importance for small and medium enterprises, which rely heavily on bank financing. Secondly, long-term policy emphasis should be on promoting a conducive investment climate, especially concerning inflation and real exchange rate uncertainty. Even though changes in price levels and exchange rates to a certain extent reflect market forces acting on them, leaning against the wind of these changes could generate positive spillover in terms of generating a conducive investment climate and promoting long-term private investment.