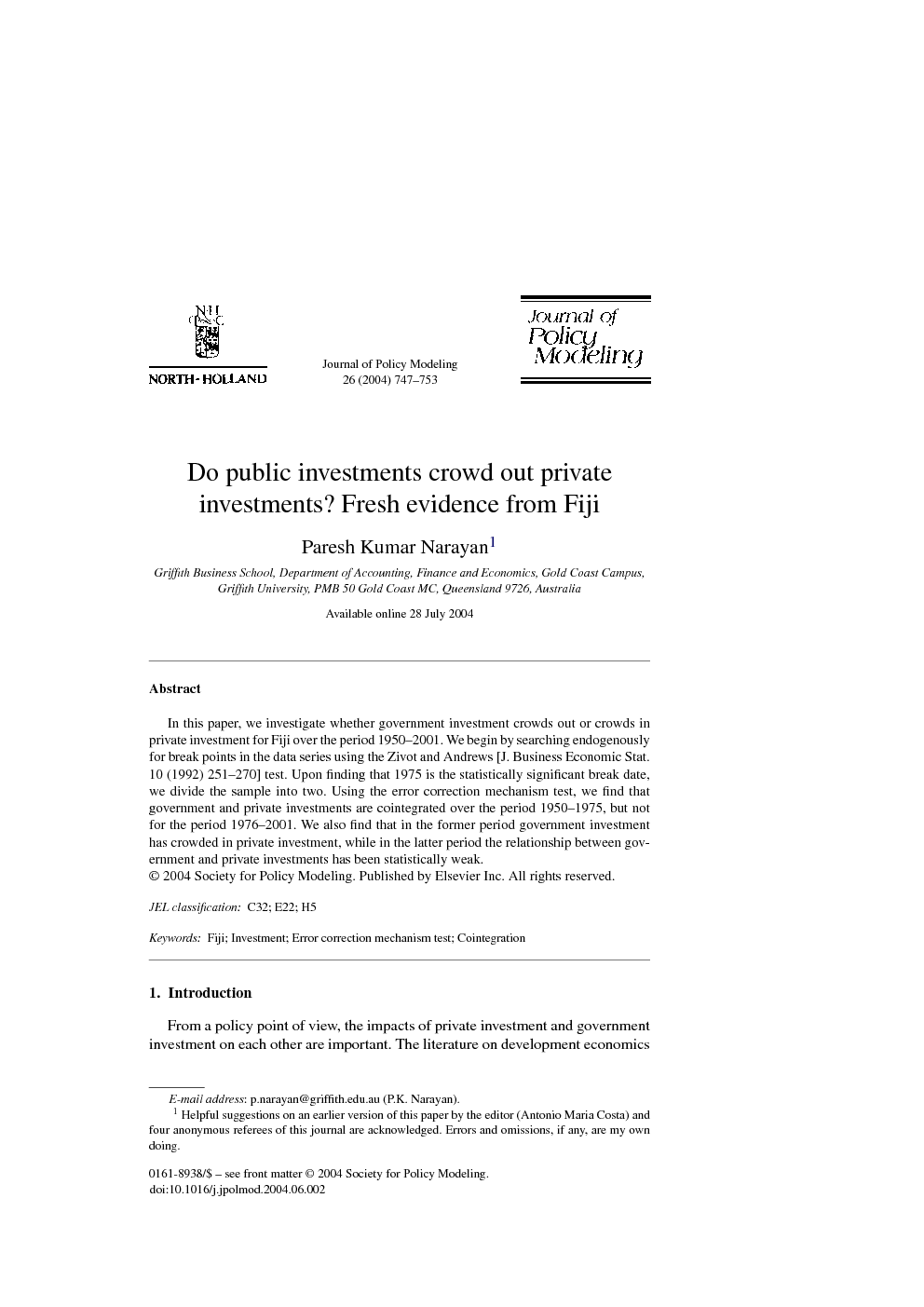 From a policy point of view, the impacts of private investment and government investment on each other are important. The literature on development economics perceives public investment as crucial, for it is seen as a driving force for private investment, which in turn drives economic growth. Ashauer (1987) argues on neoclassical grounds that an expansion of public investment should induce an increase in the rate of return to private capital, stimulating private investment expenditure. In a similar light, provision of capital goods such as infrastructure has the potential of raising the marginal productivity of capital and, hence, exerting a complementary effect on private investment. If this is true then one can claim that public investment is complementary to private investment. This is tantamount to claiming that public investment exerts a ‘crowding in’ effect on private investment. However, if public investment exerts a negative impact on private investment then the former is seen as a substitute good. This can result if higher public investment exceeds capital accumulation above the level required by private sector agents on an ex ante basis as individuals seek to re-establish an optimal intertemporal allocation of resources (Ashauer, 1989). Interpreted differently, this is testimony to the ‘crowding out’ of private investment by public investment. The central aim of this paper is to investigate whether public investment ‘crowds out’ or ‘crowds in’ private investment in Fiji. This has not only become an important question in the literature on development economics but it has also generated an immense level of interest among policy-makers in Fiji, particularly in view of the inability of the Fijian economy to generate the required level of private investment to simulate growth. Over the last decade, Fiji’s private investment has been mediocre – averaging a mere 3.5% of gross domestic product (GDP) per annum. This has become a cause for alarm for Fijian policy-makers given the prognosis of the government that, for Fiji to achieve its targeted growth rate of 5% per annum, it needs to generate private investments of 25% of GDP per annum (Kubuabola, 2002:18). Noticeably, public investment in Fiji has grown appreciably over the last couple of decades. For instance, over the period 1976–2001, public investment grew at a rate of 3% per annum. These trends warrant an investigation into whether public investment is ‘crowding out’ or ‘crowding in’ private investment in Fiji. We believe that the answer to this question has the potential to influence policy-making. In investigating the private investment and government investment nexus for Fiji, this study differs from existing studies in four novel ways. First, we investigate the nexus for a small developing economy for the first time; hence, the results from this study are likely to add to our understanding of the ‘crowding out’ and ‘crowding in’ nature of government investment. Second, we use the error correction mechanism test of Banerjee, Dolado, and Mestre (1998) extended by Pesaran, Shin, and Smith (2001) not used previously in this literature. The test has been shown to function efficiently in small sample sizes such as the one in the present study. Third, we are concerned about the robustness of our long-run results in relation to the impact of government investment on private investment, given the importance for policy-making. In this light, we depart from the existing literature in that, to ascertain robustness, we use three different estimators shown to produce robust results in small sample sizes such as in the present study. We use the autoregressive distributed lag (ARDL) approach, the dynamic ordinary least squares (DOLS) approach and the fully modified (PHFM) ordinary least squares approach. Fourth, our study can be perceived as a methodological advance over existing studies in the field. We use the Zivot and Andrews (1992) method for unit root test with one structural break. Here, the break date is established endogenously. Moreover, whilst asymptotic critical values are available for this test, Zivot and Andrews (1992) warn that with small sample sizes the distribution of the test statistic can deviate substantially from this asymptotic distribution. To circumvent this problem, we generate our own critical values specific to our sample size based on Monte Carlo simulations using GAUSS. We believe that this not only adds concreteness to our results but it also adds robustness to our results which will bear on the policy implications emerging from this study. The balance of the paper is organised as follows. In the next section, we describe the model. In Section 3, we give a brief account of the methodology. Section 4 contains the empirical results, while Section 5 concludes with policy implications.