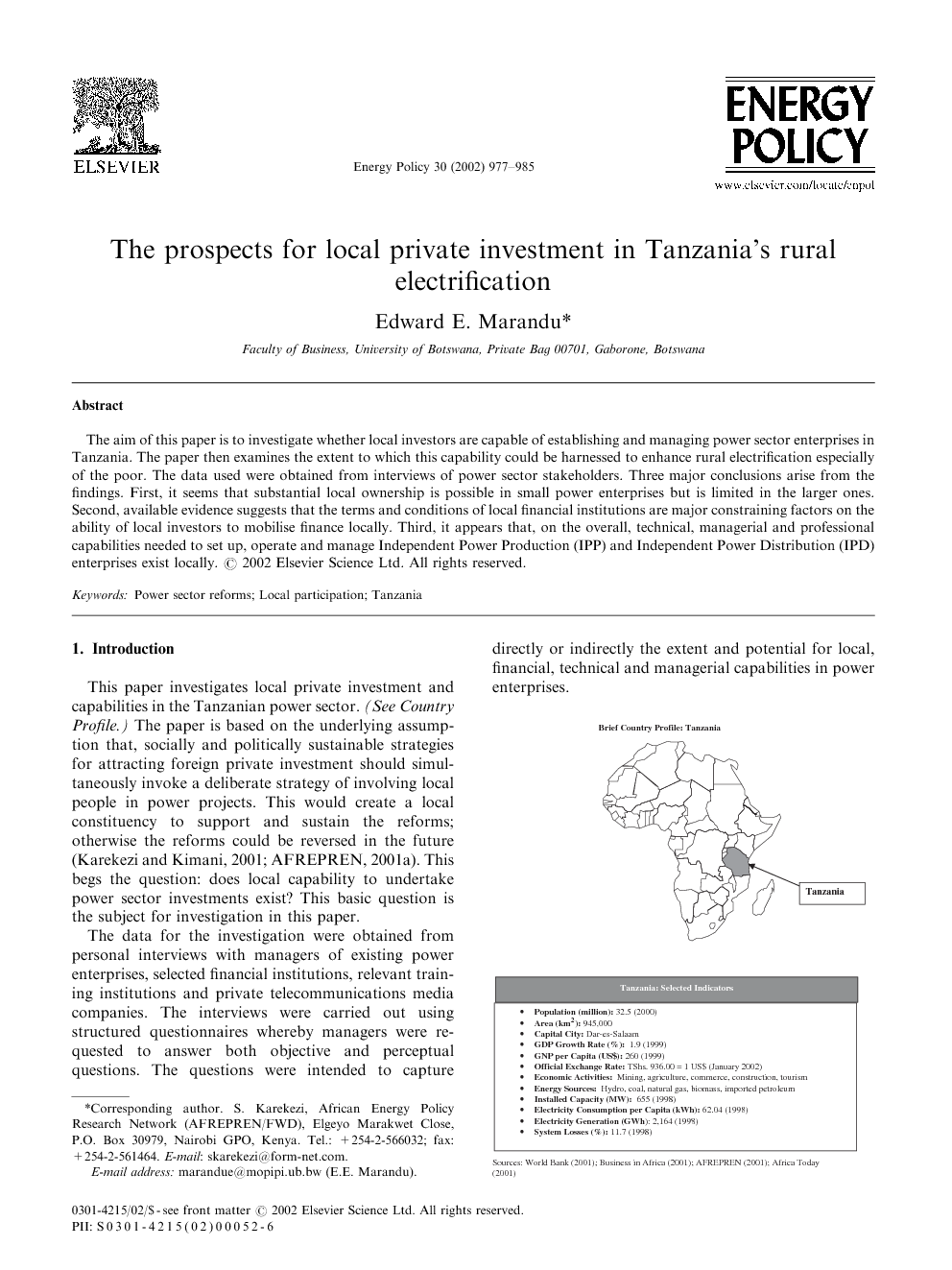 The aim of this paper is to investigate whether local investors are capable of establishing and managing power sector enterprises in Tanzania. The paper then examines the extent to which this capability could be harnessed to enhance rural electrification especially of the poor. The data used were obtained from interviews of power sector stakeholders. Three major conclusions arise from the findings. First, it seems that substantial local ownership is possible in small power enterprises but is limited in the larger ones. Second, available evidence suggests that the terms and conditions of local financial institutions are major constraining factors on the ability of local investors to mobilise finance locally. Third, it appears that, on the overall, technical, managerial and professional capabilities needed to set up, operate and manage Independent Power Production (IPP) and Independent Power Distribution (IPD) enterprises exist locally.

This paper investigates local private investment and capabilities in the Tanzanian power sector. (See Country Profile.) The paper is based on the underlying assumption that, socially and politically sustainable strategies for attracting foreign private investment should simultaneously invoke a deliberate strategy of involving local people in power projects. This would create a local constituency to support and sustain the reforms; otherwise the reforms could be reversed in the future (Karekezi and Kimani, 2001; AFREPREN, 2001a). This begs the question: does local capability to undertake power sector investments exist? This basic question is the subject for investigation in this paper. The data for the investigation were obtained from personal interviews with managers of existing power enterprises, selected financial institutions, relevant training institutions and private telecommunications media companies. The interviews were carried out using structured questionnaires whereby managers were requested to answer both objective and perceptual questions. The questions were intended to capture directly or indirectly the extent and potential for local, financial, technical and managerial capabilities in Private participation in power projects is part of broader power sector reforms that are taking place all over the world today. Experience in several countries has shown that there is a somewhat logical sequence of steps if a country is willing to pursue the whole power sector reform agenda (Albouy, 1999, p. 1; Bacon, 1999, p. 3). First, the state company must be corporatised and commercialised. Next, a law permitting the envisaged reforms must be passed. Then, arms-length regulation must be implemented. After that the state enterprise should be unbundled (restructured through Vertical and Horizontal separation). Private participation could then be allowed, perhaps initially starting with greenfield investment and finally, existing assets should be privatised. However, there is no one fixed way or format on how to conduct power sector reforms. This will to some extent be determined by the country-specific problem triggering the need for change. The five steps in the framework should be thought of as an overall approach to reforming rather than a rigid set of rules to be followed in their totality or in the same order in each country. The steps simply provide a convenient way of ensuring that important issues are not easily ignored in a reform exercise (Marandu, 1998). In order to appreciate the significance of these global reforms to Tanzania, it is helpful to put the Tanzanian power sector in context. The early power sector in the country consisted of small, privately owned companies. In 1964, 3 years after independence, the Government decided to nationalise the power supply industry into one company known as Tanganyika Electricity Supply Company (TANESCO). The aim was to correct private sector inability to increase access to electricity to the majority of the population. The company remained a national utility until recently when a series of factors began to exert pressure for changing the status quo. Some of these factors include the dissatisfaction with current performance and inability by the government to finance further investment in the sector. Whereas market failure justified intervention by the government in the past, now it is government failure justifying the role of markets. The remainder of this introductory section presents, in a nutshell, an evaluation of the Tanzanian power sector performance and reforms, which provides the context for the issues discussed in this paper. It should be of interest to the reader not familiar with the country's power sector.

It will be recalled that the central aim of this work was to investigate whether local capability to establish and run power sector enterprises exists or not and to examine the prospects for locally owned and operated rural electrification projects. Several conclusions can be drawn from the findings and the most important ones are presented below. 1.It seems that substantial capability is available for local ownership and operation of modest local private rural electrification investments. 2.It appears that, technical and managerial capability needed to set up, operate and manage IPP and IPD enterprises exists locally. Rural electricity cooperatives such as Urambo and Mbinga provide indications that, with the appropriate incentives, legal and regulatory framework in place, there is the possibility that local private investors may be capable and willing to invest in rural electrification. This is, therefore, an important option for boosting rural electrification levels, especially of the poor. 3.There is also evidence to suggest that there exists local capability by financial institutions to finance modest local private power investments. The findings, however, reveal that the terms and conditions of the local financial institutions are major constraining factors on the ability of local investors to mobilise finance locally.