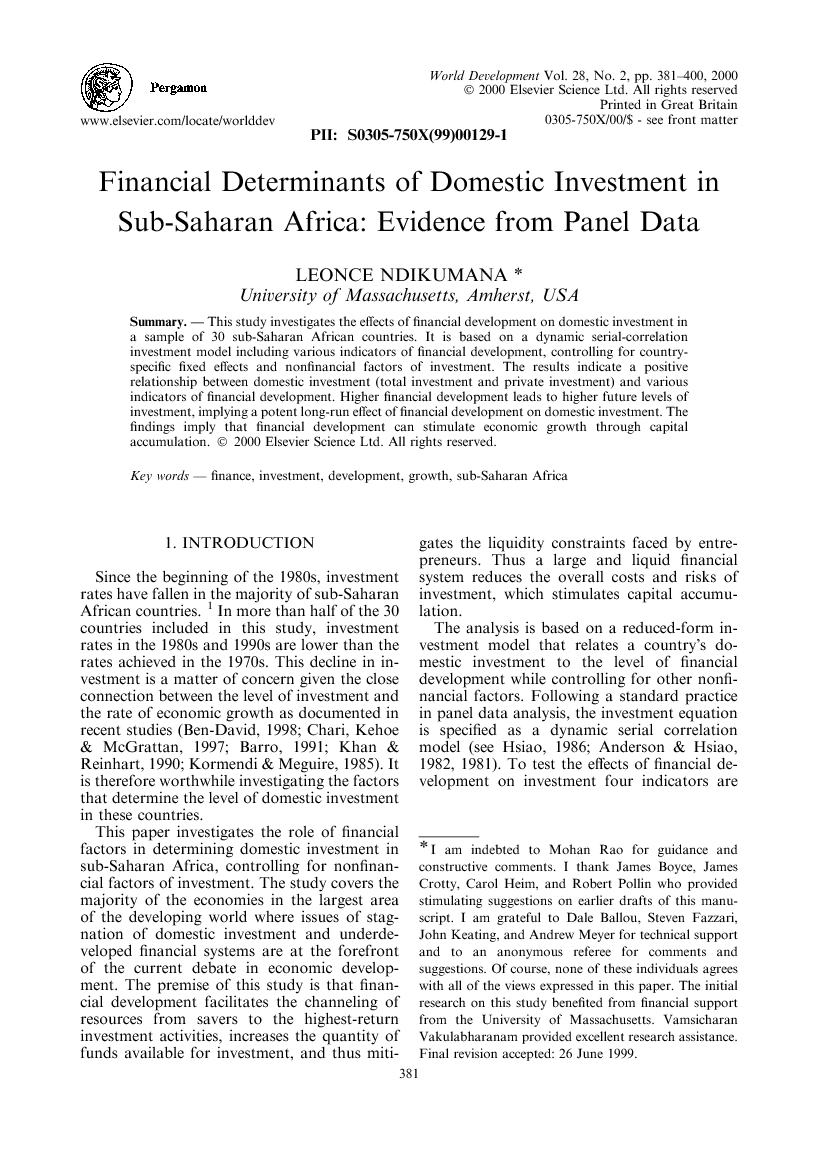 The evidence in this paper supports the view that financial factors are important determinants of domestic investment in sub-Saharan Africa. The positive relationship between financial development and investment is documented using four indicators, credit to the private sector, total liquid liabilities of the financial system, credit provided by banks, and an index combining these three indicators. The relationship is stronger for private investment, which is consistent with the expectation that it is private investment that is most dependent on financial development. The results show that high financial development leads to high future investment levels. The study provides evidence on the negative effects of external debt, inflation, black market premia, and government domestic borrowing on investment. Per capita GDP growth and international trade flows have positive effects on domestic investment. The findings of this study contribute to the growing literature that emphasizes the links between the financial sector and real economic activity in the growth process. The study indicates that financial development may affect long-run economic growth by facilitating the allocation of resources into investment activities. The evidence implies that sub-Saharan African countries can benefit from encouraging a balanced expansion of their financial systems. Countries can gain from promoting policies that reduce the costs of financial intermediation (tax policies, regulation policies, etc.), encouraging lending to investment activities, and cutting down on government domestic borrowing for consumption purposes. A number of issues that are relevant to the links between financial development and domestic investment are not explored in this study. For example, it may be worthwhile to investigate whether crosscountry differences in the structure of financial systems have an effect on the ability of financial development to stimulate domestic investment. Moreover, the scarcity of country-level data for sub-Saharan Africa precludes detailed analysis that distinguishes between public and private investment. Furthermore, some important aspects of the links between finance and investment are inevitably blurred in any analysis that uses aggregate data. Such analysis cannot capture the effects of sectoral distribution of credit supply (for example, between small and large firms, services and manufacturing sectors, etc.), or the role of various forms of financing that are not recorded in the official data (like informal credit mechanisms). These caveats, in effect, imply that the results of this study may underestimate the true effects of financial development on investment.