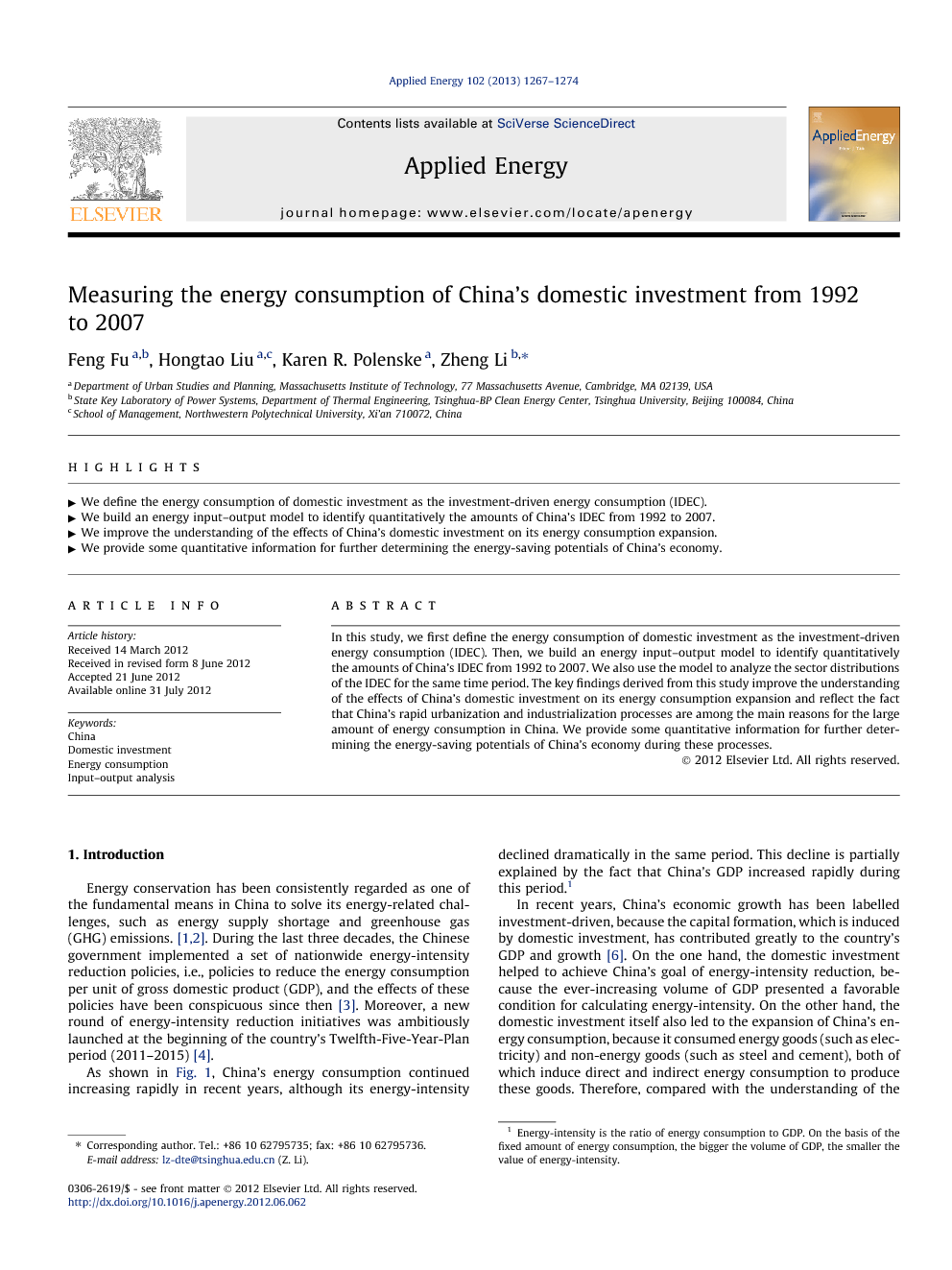 Energy conservation has been consistently regarded as one of the fundamental means in China to solve its energy-related challenges, such as energy supply shortage and greenhouse gas (GHG) emissions. [1] and [2]. During the last three decades, the Chinese government implemented a set of nationwide energy-intensity reduction policies, i.e., policies to reduce the energy consumption per unit of gross domestic product (GDP), and the effects of these policies have been conspicuous since then [3]. Moreover, a new round of energy-intensity reduction initiatives was ambitiously launched at the beginning of the country’s Twelfth-Five-Year-Plan period (2011–2015) [4]. As shown in Fig. 1, China’s energy consumption continued increasing rapidly in recent years, although its energy-intensity declined dramatically in the same period. This decline is partially explained by the fact that China’s GDP increased rapidly during this period.1In recent years, China’s economic growth has been labelled investment-driven, because the capital formation, which is induced by domestic investment, has contributed greatly to the country’s GDP and growth [6]. On the one hand, the domestic investment helped to achieve China’s goal of energy-intensity reduction, because the ever-increasing volume of GDP presented a favorable condition for calculating energy-intensity. On the other hand, the domestic investment itself also led to the expansion of China’s energy consumption, because it consumed energy goods (such as electricity) and non-energy goods (such as steel and cement), both of which induce direct and indirect energy consumption to produce these goods. Therefore, compared with the understanding of the domestic investment’s economic effects, there is an urgent need to improve the understanding of the effects of China’s domestic investment on its energy-consumption expansion. Input–output analysis, a useful analytical and planning framework developed by Leontief [7], considers the various economic sectors as a series of inputs of source materials (or services) and outputs of final or intermediate goods (or services). Input–output analysis is based on input–output tables, which present economic exchanges of goods and services among industrial sectors in matrix form. In order to take into account both the direct and indirect effects of a growth in the output of an industry in one economy, Rasmussen [8] developed methods for measuring inter-industry linkages using the inverse of the input–output table. Hirschman [9] then suggested that backward-linkage effects are related to derived demand, while forward-linkage effects are related to output consumption. Because the input–output table conveniently provides an exact quantitative relationship between the energy producers and its users, many analysts have used input–output analysis to study the energy consumption caused by different economic activities [10], [11], [12], [13], [14] and [15]. For example, Pick and Becker [16] used input–output analysis to evaluate direct and indirect uses of energy and materials in engineering and construction. Other analysts have also conducted similar studies, either focusing on national or regional economies [17], [18], [19] and [20]. Among the empirical studies of China, analysts have already studied the effects of many economic activities on energy consumption. Polenske and McMichael [21], for example, designed a coke-making input–output process-flow model to understand the energy consumption, efficiency, and environmental pollution in the coke-making process, Chang et al. [22] estimated the embodied energy and environmental impacts of construction projects in China. Liu et al. [19] made a comprehensive evaluation of household indirect energy consumption and impacts of alternative energy policies in China. Liu et al. [23] evaluated the impacts of international trade on energy use and identified the underlying factors that contribute to modifying the energy embodied in exports over years. Chen and Zhang [24] built a GHG emission inventory by economic sector in China in 2007 to reveal systematically the GHG emission embodiment in final consumption and international trade of the Chinese economy, and Su et al. [25] investigated how sector aggregation affects estimates of energy-related carbon-dioxide emissions in international trade based on the input–output framework. However, few analysts have studied the investment effects, i.e., assessing the effects of China’s domestic investment on its energy consumption expansion. In this paper, we measure the energy consumption of China’s domestic investment, so as to provide critical insights for the country’s policy-makers to refine the current intensity-reduction-oriented energy-efficiency policies. We first define the energy consumption of domestic investment as the investment-driven energy consumption. Then, we build an energy input–output model to identify quantitatively the amounts of China’s investment-driven energy consumption in 1992, 1997, 2002 and 2007. We also use the model to analyze the sector distributions of the investment-driven energy consumption for the same period.