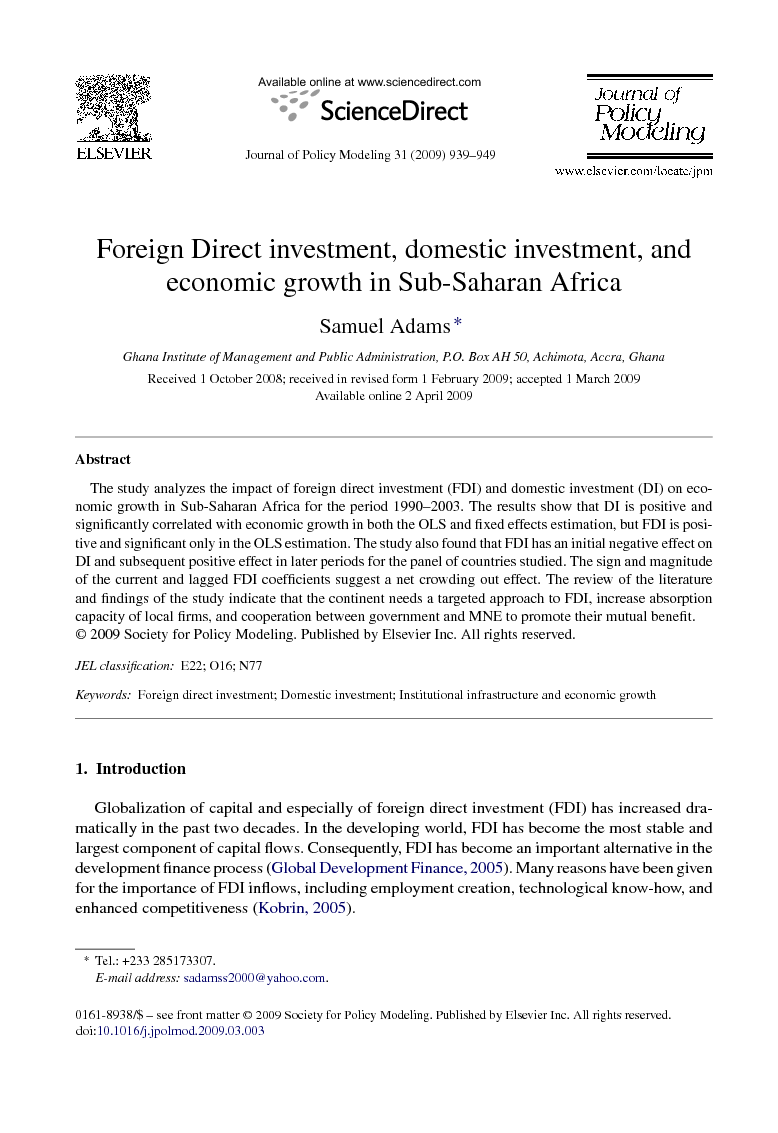 The study analyzes the impact of foreign direct investment (FDI) and domestic investment (DI) on economic growth in Sub-Saharan Africa for the period 1990–2003. The results show that DI is positive and significantly correlated with economic growth in both the OLS and fixed effects estimation, but FDI is positive and significant only in the OLS estimation. The study also found that FDI has an initial negative effect on DI and subsequent positive effect in later periods for the panel of countries studied. The sign and magnitude of the current and lagged FDI coefficients suggest a net crowding out effect. The review of the literature and findings of the study indicate that the continent needs a targeted approach to FDI, increase absorption capacity of local firms, and cooperation between government and MNE to promote their mutual benefit.

Globalization of capital and especially of foreign direct investment (FDI) has increased dramatically in the past two decades. In the developing world, FDI has become the most stable and largest component of capital flows. Consequently, FDI has become an important alternative in the development finance process (Global Development Finance, 2005). Many reasons have been given for the importance of FDI inflows, including employment creation, technological know-how, and enhanced competitiveness (Kobrin, 2005). In light of the expected benefits of FDI, many studies have been conducted to examine the impact of FDI on growth, but only a few studies have considered the impact of FDI in the context of Sub-Saharan Africa (SSA). This paper fills the void in examining the impact of FDI on economic growth in SSA. The paper contributes to the literature on FDI in three main ways. First, the focus on SSA with similar social, economic, and political conditions may help to reduce any bias due to sample selection. Second, many authors have noted that FDI has differential effects and that it has been more productive in some regions than others (Agosin and Mayer, 2000, Kumar and Pradhan, 2002 and Sylwester, 2005). Kumar and Pradhan (2002) and Sylwester (2005), for example, claim that FDI is less effective in SSA than in Latin America. The results of these studies, however, cannot be generalized. For example, the Sylwester (2005) study sample is made up of 29 countries with only two countries (Tanzania and South Africa) from SSA, and Fry (1993) had only one country (Nigeria) from Sub-Saharan Africa. Consequently, the use of a large data set of 42 Sub-Saharan African countries will help to better explain the impact of FDI on economic growth in SSA. Finally, the study examined the effect of FDI on domestic investment to examine whether FDI crowds in or crowds out domestic investment. The rest of the paper is organized as follows: Section 2 discusses the theoretical and empirical literature on the relationship between FDI and economic growth. Section 3 describes the data and measures used. Section 4 presents the empirical results and discusses the findings. Section 5 offers managerial and policy implications, suggestions for future research, and concluding remarks.