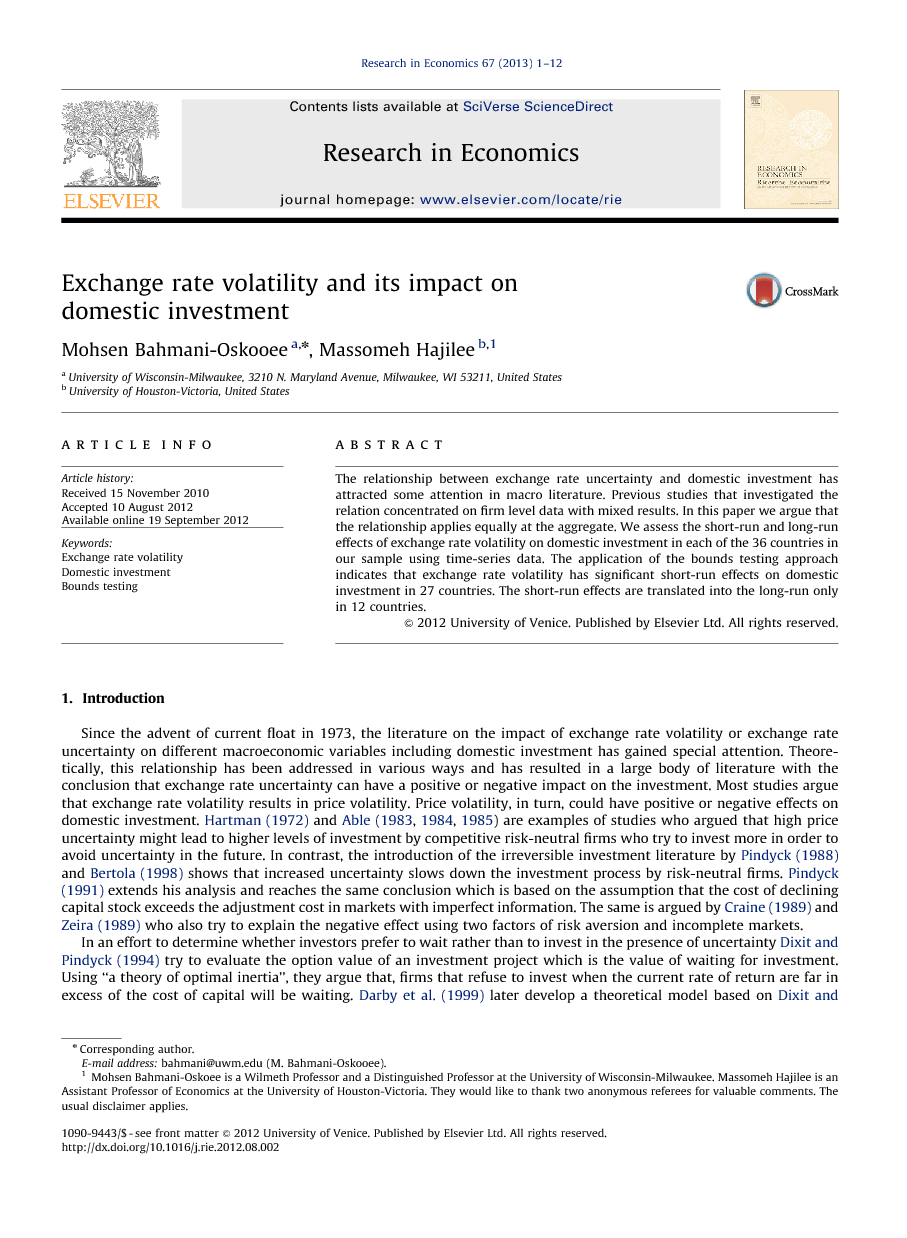 Since the advent of current float in 1973, the literature on the impact of exchange rate volatility or exchange rate uncertainty on different macroeconomic variables including domestic investment has gained special attention. Theoretically, this relationship has been addressed in various ways and has resulted in a large body of literature with the conclusion that exchange rate uncertainty can have a positive or negative impact on the investment. Most studies argue that exchange rate volatility results in price volatility. Price volatility, in turn, could have positive or negative effects on domestic investment. Hartman (1972) and Able (1983, 1984, 1985) are examples of studies who argued that high price uncertainty might lead to higher levels of investment by competitive risk-neutral firms who try to invest more in order to avoid uncertainty in the future. In contrast, the introduction of the irreversible investment literature by Pindyck (1988) and Bertola (1998) shows that increased uncertainty slows down the investment process by risk-neutral firms. Pindyck (1991) extends his analysis and reaches the same conclusion which is based on the assumption that the cost of declining capital stock exceeds the adjustment cost in markets with imperfect information. The same is argued by Craine (1989) and Zeira (1989) who also try to explain the negative effect using two factors of risk aversion and incomplete markets. In an effort to determine whether investors prefer to wait rather than to invest in the presence of uncertainty Dixit and Pindyck (1994) try to evaluate the option value of an investment project which is the value of waiting for investment. Using “a theory of optimal inertia”, they argue that, firms that refuse to invest when the current rate of return are far in excess of the cost of capital will be waiting. Darby et al. (1999) later develop a theoretical model based on Dixit and Pindyck (1994). The theoretical model they develop tries to answer three related questions. First, the model introduces the threshold at which exchange rate uncertainty could have adverse effects on investment. Second, the model identifies conditions under which uncertainty actually reduces investment. Finally, the model also includes a measure of exchange rate misalignments and shows that in addition to exchange rate uncertainty, exchange rate misalignments can affect investment. Their model clearly identifies conditions under which exchange rate volatility could have negative or positive effects on domestic investment. The condition is basically reduced to opportunity cost of waiting versus the present value. If opportunity cost of waiting is lower than the present value or the scrapping price by firms, producers will be inclined to wait rather than to invest. On the other hand, the waiting effect may disappear if uncertainty is rather low. Although the theoretical model was developed at firm level, they test its predictions by estimating an aggregate investment function for France, Germany, Italy, U.K, and the U.S. for which the real cost of capital is constructed using the implicit business sector investment and output deflators and a long term interest rate. They find that indeed, suppressing volatility and exchange rate misalignment for all five countries will increase investment. The most powerful effects of misalignment occur in Italy and lesser effects are present in French, UK and US models. In the case of German model, no significant effects of misalignment could be identified. As for the effects of exchange rate volatility, they found that it has negative significant long-run impact in the United States, Germany and France with elasticities of −0.21, −0.19 and −0.13 respectively, but only a temporary effect in the UK and Italy. Sarkar (2000) uses the real option model of McDonald and Siegel (1986) and Dixit and Pindyck (1994) and shows the non-monotonic relationship between investment and uncertainty. To estimate the effect of uncertainty on investment, he employs the probability of achieving an optimal investment within a pre specified time. An increase in the probability measure with the volatility of the project, is inferred as a sign of a positive relationship between uncertainty–investment relationships. On the other hand, a decrease in the probability measure associated with the volatility of a project signifies a negative relationship between investment and uncertainty. Wong (2007) modifies the real options approach of Sarkar (2000) by using the effect of uncertainty on investment timing rather than on the probability measure. By looking at the effect of uncertainty on investment timing in a real option model, he shows that for relatively safe projects, greater uncertainty shortens the expected exercise time and thus increases the investment level in high growth projects. Note that this conclusion is different from the negative investment–uncertainty relationship mentioned above. Given the above literature, we revisit the impact of exchange rate uncertainty on domestic investment by including a measure of exchange rate uncertainty in a standard investment function. By using recent advances in econometrics, we distinguish the short-run effects from the long-run effects. This is perhaps the most comprehensive study on the topic since the model is estimated for 36 countries. To that end, Section 2 introduces the model and the method. Section 3 reports the empirical results. Section 4 is dedicated for our concluding remarks and finally, data definition and sources appear in an Appendix.