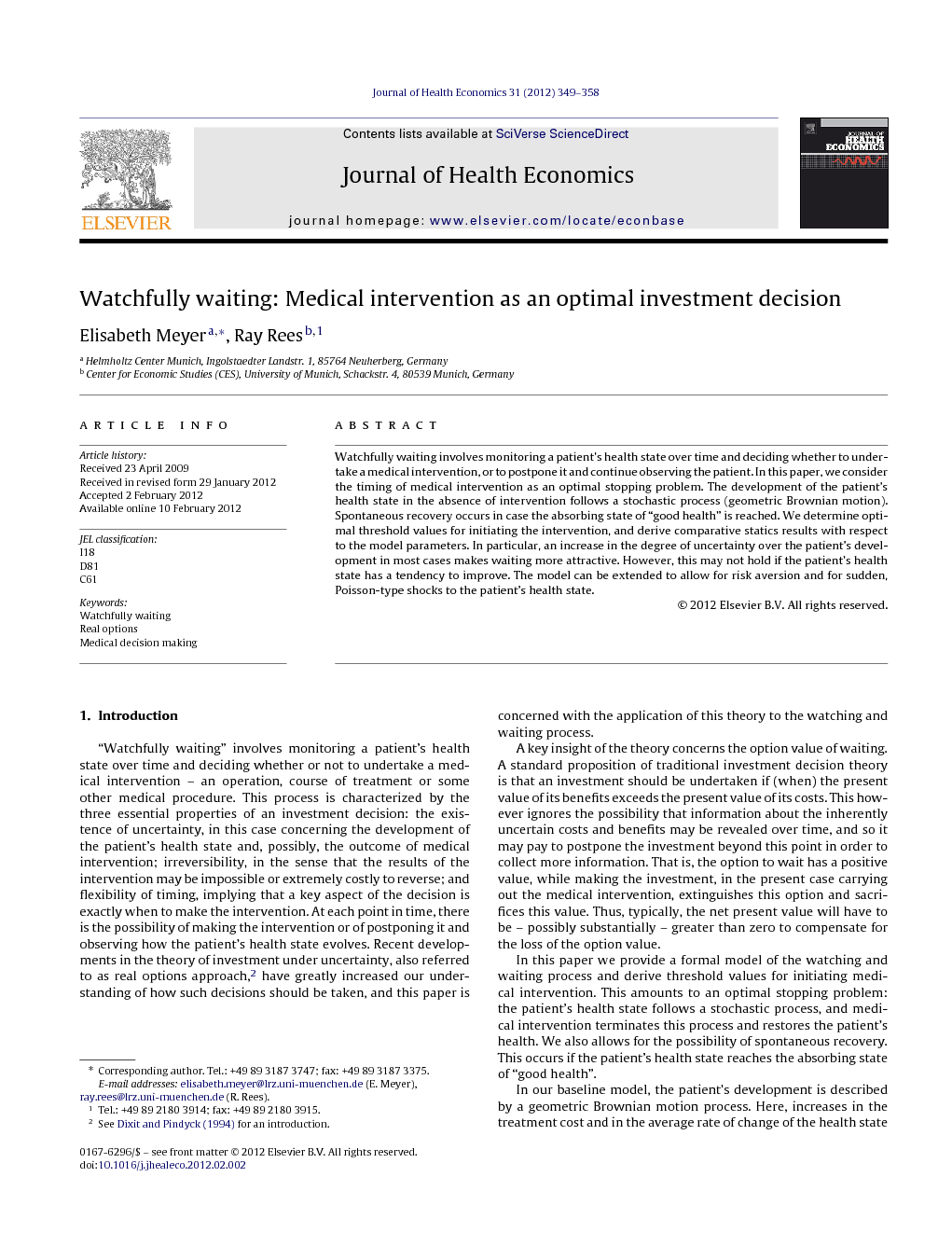 We have shown that watchfully waiting represents an important treatment alternative in cases where the course of illness is uncertain. The existence of uncertainty raises the benefit of waiting whenever the patient's condition has a tendency to get worse, net of the discount rate, and particularly when the disease is progressing slowly. When there is a strong tendency to recovery, on the other hand, an increase in the level of uncertainty may work in favour of immediate intervention. Moreover, increases in the drift rate of the GBM process, in the treatment costs and in the discount rate have a negative effect on the threshold value for the treatment decision. In contrast, the possibility of sudden shocks to the patient's health state works in favour of immediate intervention. The model is based on the assumption that the benefit of medical intervention, relative to watchfully waiting, is decreasing in the patient's health state. For some diseases, the opposite may be true: that is, medical treatment may be effective only in less severe cases, whereas waiting (or palliative treatment) would be indicated for severely ill patients. In that context, watchfully waiting corresponds to a passive treatment strategy, and the chances of curative treatment are small. We believe that the more interesting areas of application are those where curative treatment is still possible after a period of waiting. For instance, several types of cancer are slowly progressing, but can be diagnosed through modern screening methods at a very early stage. In many cases, the disease would not become symptomatic during the patient's lifetime, and there are concerns that screening may lead to over-treatment. Therefore, watchfully waiting plays an important role, even though reliable threshold values may not yet be available.15 Arguably, both medical research and consequent application of the ideas discussed in this paper could help improve decision-making. In deriving the results of this paper, we have made several simplifying assumptions. For example, we have used rather stylized stochastic processes to characterize the progression of the disease. Furthermore, we have assumed that the costs and benefits of medical intervention are constant over time, and over the patient's health state. While these assumptions may not be very realistic, they are useful to analyze the treatment decision at a general level. The next step is to apply this approach to specific treatment decisions. Then, future studies may find that watchfully waiting is beneficial also for patients who, according to current practice guidelines, would receive immediate treatment or, possibly, for illnesses where active monitoring is not currently practiced.