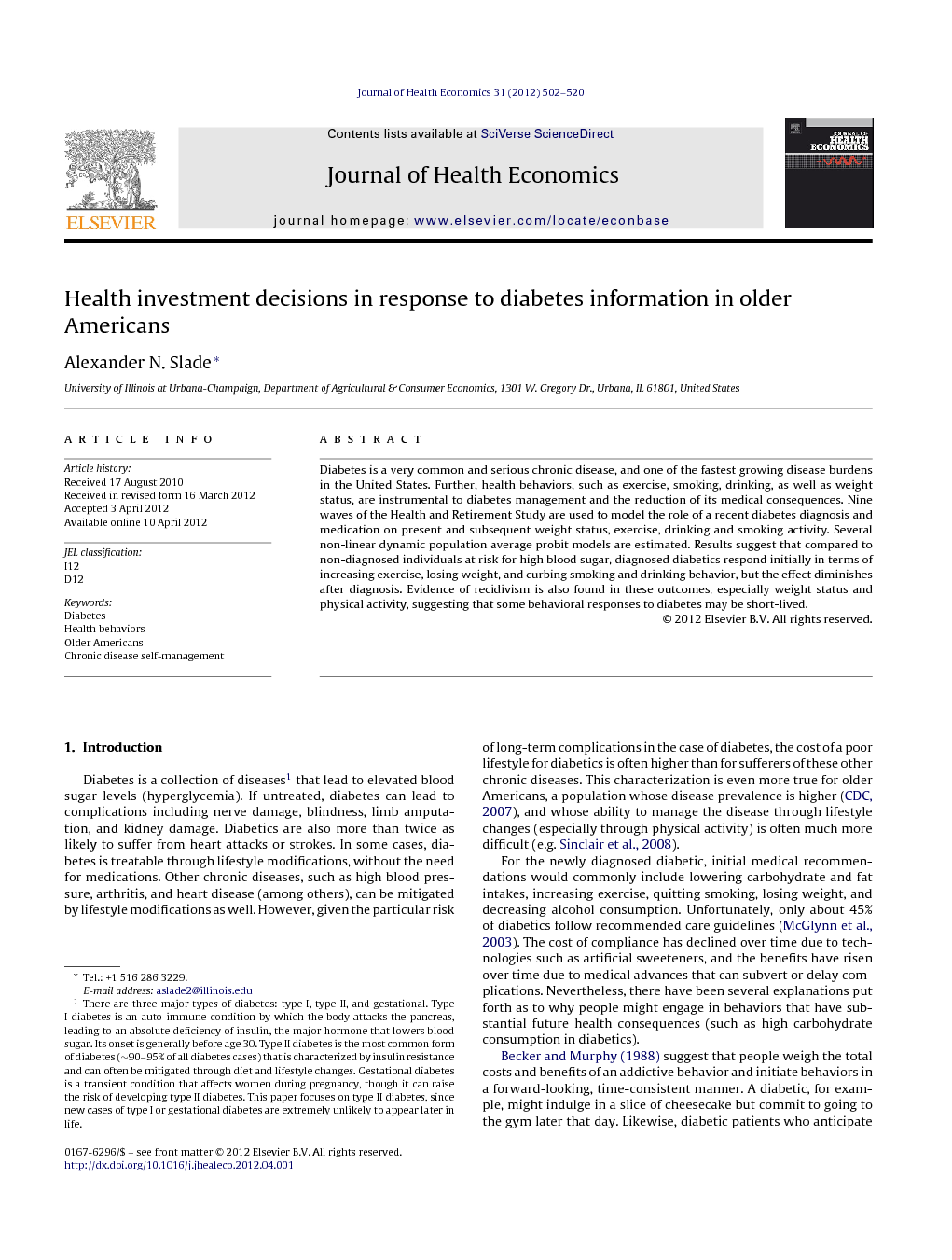 Diabetes is a very common and serious chronic disease, and one of the fastest growing disease burdens in the United States. Further, health behaviors, such as exercise, smoking, drinking, as well as weight status, are instrumental to diabetes management and the reduction of its medical consequences. Nine waves of the Health and Retirement Study are used to model the role of a recent diabetes diagnosis and medication on present and subsequent weight status, exercise, drinking and smoking activity. Several non-linear dynamic population average probit models are estimated. Results suggest that compared to non-diagnosed individuals at risk for high blood sugar, diagnosed diabetics respond initially in terms of increasing exercise, losing weight, and curbing smoking and drinking behavior, but the effect diminishes after diagnosis. Evidence of recidivism is also found in these outcomes, especially weight status and physical activity, suggesting that some behavioral responses to diabetes may be short-lived.

Diabetes is a highly prevalent and deleterious disease in America, especially in older Americans. Medical evidence suggests that health behaviors significantly mitigate the disease, however, compliance with these health investment behaviors is relatively low. This paper analyzes the role of recent (including new) diabetes information and medication on smoking, drinking, exercise and weight status outcomes using population average probit models and linear comparison models. A comparison group of individuals who have not yet been diagnosed with diabetes, but are likely to suffer from high blood sugar, was used. Further, medication status at diagnosis was used to gauge the relative clinical stage at which a diabetic was diagnosed: those diagnosed without medication were considered to have been diagnosed somewhat earlier than those diagnosed with oral medication or insulin. From the descriptive analysis, individuals who are diagnosed with diabetes tend to weigh more, but smoke and drink less than individuals in the comparison group. Considering the trajectory of these behaviors over time, diagnosed diabetics tended to substantially curb their smoking or drinking behavior both during the diagnosis period and in subsequent years. However, exercise and overweight or obese status showed a short “shock” behavior, in which diabetics initially responded to the diagnosis by losing weight and increasing exercise, but quickly returned to their original habits subsequent to their diagnosis. The dynamic population average models confirmed these trends, with individuals tending to curb smoking and drinking behavior, lose weight, and increase exercise during the diagnosis period. Overall, individuals diagnosed with medication tended to respond somewhat more to a new diabetes diagnosis, especially in reducing drinking activity and increasing exercise activity. In other cases, the trajectory of these behaviors was relatively similar between those diagnosed with and without medication. Two years or longer subsequent to diagnosis, individuals reduced smoking, drinking, and exercise levels, and gained weight. Linear fixed effects models reflected a much lower propensity for smoking and drinking behavior post-diagnosis compared to an individual's entire longitudinal history of these activities. Similar results were found in the body weight specifications. Given that individuals tend to respond most strongly to a diabetes diagnosis closer to the time of diagnosis, especially with regard to exercise and weight loss, the importance of an accurate and fast diagnosis of diabetes is all the more important, especially in older individuals. Since there are many diabetics who do not know they have it, a faster diagnosis can yield lower rates of complications and better long-term outcomes.