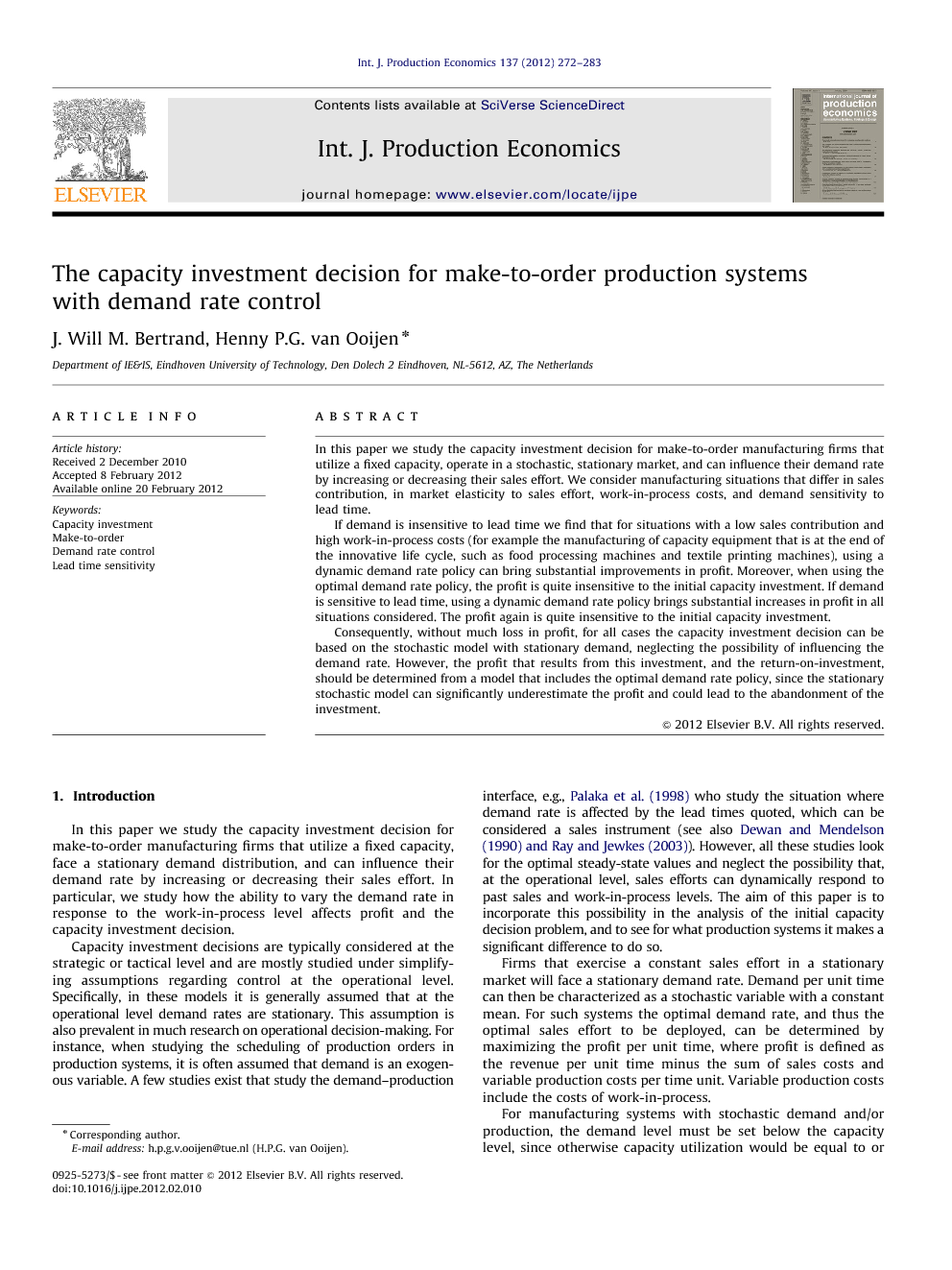 In this paper we study the capacity investment decision for make-to-order manufacturing firms that utilize a fixed capacity, operate in a stochastic, stationary market, and can influence their demand rate by increasing or decreasing their sales effort. We consider manufacturing situations that differ in sales contribution, in market elasticity to sales effort, work-in-process costs, and demand sensitivity to lead time. If demand is insensitive to lead time we find that for situations with a low sales contribution and high work-in-process costs (for example the manufacturing of capacity equipment that is at the end of the innovative life cycle, such as food processing machines and textile printing machines), using a dynamic demand rate policy can bring substantial improvements in profit. Moreover, when using the optimal demand rate policy, the profit is quite insensitive to the initial capacity investment. If demand is sensitive to lead time, using a dynamic demand rate policy brings substantial increases in profit in all situations considered. The profit again is quite insensitive to the initial capacity investment. Consequently, without much loss in profit, for all cases the capacity investment decision can be based on the stochastic model with stationary demand, neglecting the possibility of influencing the demand rate. However, the profit that results from this investment, and the return-on-investment, should be determined from a model that includes the optimal demand rate policy, since the stationary stochastic model can significantly underestimate the profit and could lead to the abandonment of the investment.

In this paper, we studied the capacity investment decision problem for make-to-order manufacturing systems that utilize a fixed capacity, operate in a stationary stochastic market, and can influence their demand by increasing or decreasing their sales effort. We assumed that the firm, after installation of the fixed capacity, dynamically influences the demand rate in response to the development of the work-in-process and that this control of demand has an immediate effect on the demand. We modeled the system as a single machine queuing system with a fixed service rate, resulting from the initial capacity investment decision. The system faces stochastic demand with a demand rate that is dynamically controlled in response to the development over time of the work-in-process. Computational analysis of a number of manufacturing situations leads to the following conclusions. First, being able to dynamically control the demand rate without any delay can bring substantial increases in profits. For situations where demand is insensitive to lead time this applies in particular if contributions are small and unit work-in-process value is high. This is due to the fact that dynamic demand rate control allows the system to operate at higher capacity utilization without a much higher work-in-process level. Examples of such situations are companies that produce capacity equipment that is at the end of the innovative life cycle, such as companies that produce food processing machines or textile printing machines. For these situations, it pays to invest in coordination of sales with production. These effects are stronger if markets are less elastic, but the effect of elasticity seems to be of minor importance. For situations where demand is sensitive to lead time, dynamic demand rate switching leads to a substantial increase in profit for all situations considered: low contribution in combination with high unit work-in-process value, and high contribution with low unit work-in-process value. In all cases the demand rate switching policy creates low average work-in-process resulting in high demand. Second, for all situations total profit is quite insensitive to the capacity investment: costs improvements are in the range of 2% to 3%. As a result, provided that a dynamic demand rate policy is used during operation, the total profit is quite insensitive to errors made when making the capacity investment decision. Thus, without too much error, the capacity decision can be made using the stationary stochastic model. However, since this model can grossly underestimate the expected profit, the expected profit, and the expected return-on-investment of the installed capacity, must be determined from the dynamic demand rate model, otherwise the risk exists that the investment opportunity is abandoned.