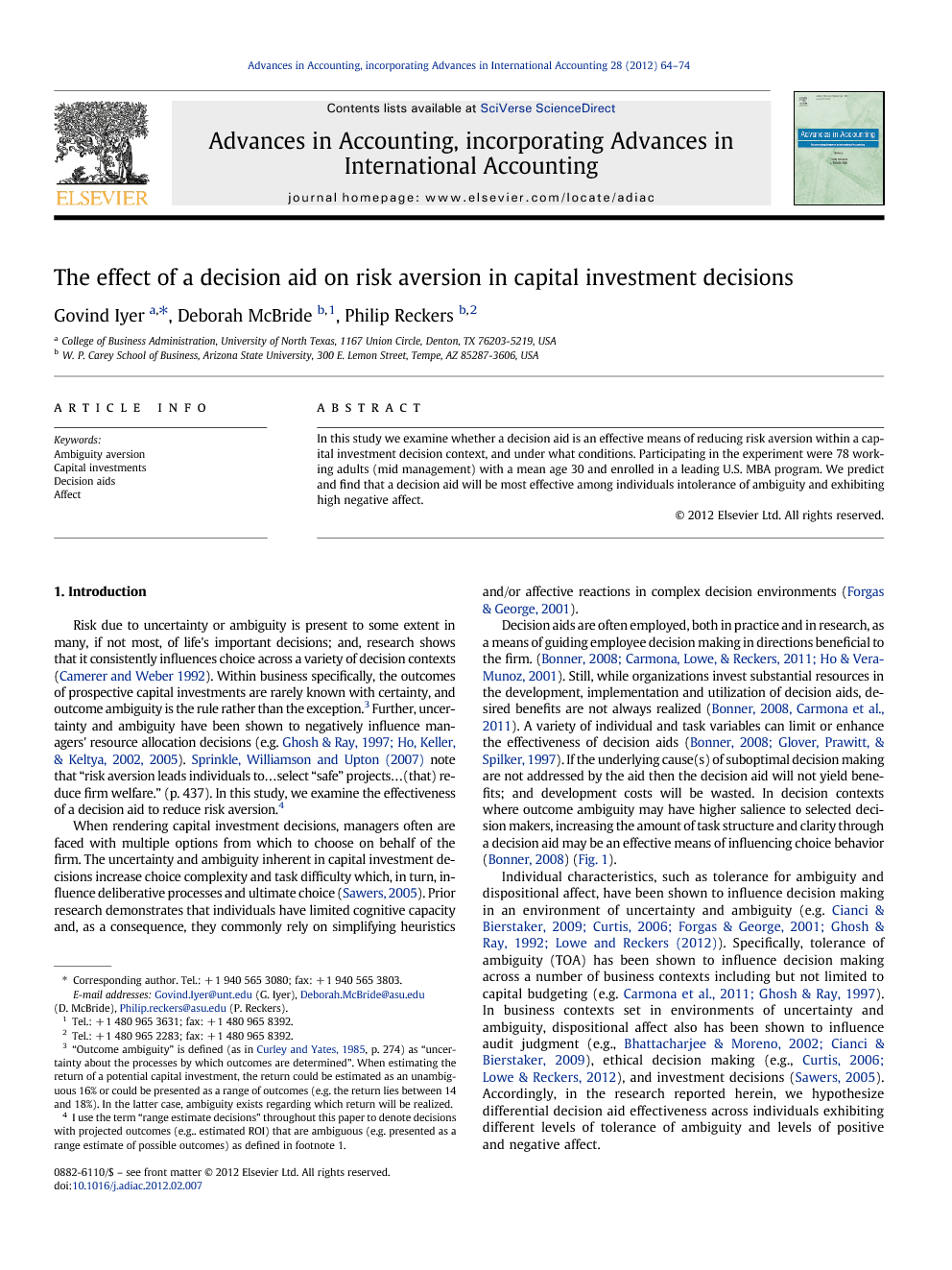 In this study we examine whether a decision aid is an effective means of reducing risk aversion within a capital investment decision context, and under what conditions. Participating in the experiment were 78 working adults (mid management) with a mean age 30 and enrolled in a leading U.S. MBA program. We predict and find that a decision aid will be most effective among individuals intolerance of ambiguity and exhibiting high negative affect.

Risk due to uncertainty or ambiguity is present to some extent in many, if not most, of life's important decisions; and, research shows that it consistently influences choice across a variety of decision contexts (Camerer and Weber 1992). Within business specifically, the outcomes of prospective capital investments are rarely known with certainty, and outcome ambiguity is the rule rather than the exception.3 Further, uncertainty and ambiguity have been shown to negatively influence managers' resource allocation decisions (e.g. Ghosh and Ray, 1997, Ho et al., 2002 and Ho et al., 2005). Sprinkle, Williamson and Upton (2007) note that “risk aversion leads individuals to…select “safe” projects…(that) reduce firm welfare.” (p. 437). In this study, we examine the effectiveness of a decision aid to reduce risk aversion.4 When rendering capital investment decisions, managers often are faced with multiple options from which to choose on behalf of the firm. The uncertainty and ambiguity inherent in capital investment decisions increase choice complexity and task difficulty which, in turn, influence deliberative processes and ultimate choice (Sawers, 2005). Prior research demonstrates that individuals have limited cognitive capacity and, as a consequence, they commonly rely on simplifying heuristics and/or affective reactions in complex decision environments (Forgas & George, 2001). Decision aids are often employed, both in practice and in research, as a means of guiding employee decision making in directions beneficial to the firm. (Bonner, 2008, Carmona et al., 2011 and Ho and Vera-Munoz, 2001). Still, while organizations invest substantial resources in the development, implementation and utilization of decision aids, desired benefits are not always realized (Bonner, 2008 and Carmona et al., 2011). A variety of individual and task variables can limit or enhance the effectiveness of decision aids (Bonner, 2008 and Glover et al., 1997). If the underlying cause(s) of suboptimal decision making are not addressed by the aid then the decision aid will not yield benefits; and development costs will be wasted. In decision contexts where outcome ambiguity may have higher salience to selected decision makers, increasing the amount of task structure and clarity through a decision aid may be an effective means of influencing choice behavior (Bonner, 2008) (Fig. 1).Individual characteristics, such as tolerance for ambiguity and dispositional affect, have been shown to influence decision making in an environment of uncertainty and ambiguity (e.g. Cianci and Bierstaker, 2009, Curtis, 2006, Forgas and George, 2001, Ghosh and Ray, 1992 and Lowe and Reckers, 2012). Specifically, tolerance of ambiguity (TOA) has been shown to influence decision making across a number of business contexts including but not limited to capital budgeting (e.g. Carmona et al., 2011 and Ghosh and Ray, 1997). In business contexts set in environments of uncertainty and ambiguity, dispositional affect also has been shown to influence audit judgment (e.g., Bhattacharjee and Moreno, 2002 and Cianci and Bierstaker, 2009), ethical decision making (e.g., Curtis, 2006 and Lowe and Reckers, 2012), and investment decisions (Sawers, 2005). Accordingly, in the research reported herein, we hypothesize differential decision aid effectiveness across individuals exhibiting different levels of tolerance of ambiguity and levels of positive and negative affect. We conducted an experiment in which participants selected among three capital investment proposals with the investment proposals varying in levels of outcome ambiguity. The proposal promising the greatest contribution to corporate goals was also the proposal with the greatest outcome risk (ambiguity). All participants were provided with information about company goals (both long- and short-term) to assist in their decision making. Additionally, half the participants received a decision aid requiring assessment of the contribution of each proposal toward achieving each of the various long- and short-term strategic goals of the organization. Participants then allocated points among the three capital investment proposals according to their relative degree of support. Individual levels of tolerance of ambiguity were measured using the MacDonald (1970) tolerance of ambiguity scale; and dispositional affect was measured using a modified PANAS scale (Watson & Tellegen, 1985). We predicted and found that decision aids would have their greatest effect among individuals reticent to make a decision on their own (those exhibiting high negative affect, consistent with Sawers, 2005) and individuals intolerant of ambiguity and seeking decision making structure (Bonner, 2008). The results of this study have implications for decision aid use and design in capital investment decisions and contribute to existing literature regarding the factors that influence decision aid effectiveness. As most accounting decisions involve some degree of uncertainty, the factors that influence these types of decisions are of particular interest to many accounting researchers (e.g., Bonner, 2008, Haka, 2007 and Loewenstein et al., 2008). The remainder of this paper is organized as follows: Section II provides the theoretical issues and develops the hypotheses for this study. The research methodology is described in section III, followed by the results in Section IV. Section V summarizes the results and discusses implications, limitations and directions for future research.

This research project was conducted to learn how decision aids can influence capital budgeting decision making (choice among investment options) under conditions wherein investment options exhibit differing degrees of ambiguity risk. That is, while the investment options all promised the same ROI (point estimates), the range around the ROI point estimates varied across the projects from low to medium to high. The results of this analysis show that, as a method for overcoming ambiguity-averse choice behavior in capital investment decisions, a decision aid was only effective for a subset of participants. Specifically, receptive participants were those who were predisposed by low tolerance of ambiguity or high dispositional negative affect. Tolerance of ambiguity arguably is a stable personal trait which may be difficult to change. Negative affect (specifically fear) is often a product of past experience in the work place; and as such, may be altered by changes made to the work environment. Similarly, individuals exhibiting high dispositional positive affect (arousal) were observed to be more risk seeking. This is consistent with prior research outside of business. A rich literature exists with respect to dispositional affect and its antecedents as well as its consequences. These finding highlight potential areas for future research regarding effective decision aid development and implementation. This study contributes to the literature on the influence of individual differences in capital investment decision making and decision aid effectiveness. The results highlight the importance of personality traits in designing effective aids to decision making and the importance of the work environment as an antecedent to dispositional affective states. The current study also contributes to the growing accounting literature examining the influence of outcome ambiguity in capital investment decisions and the factors that influence ambiguity-averse choice behaviors in this setting. While this study provides additional insights into decision aid effectiveness, there are several limitations. First, this study was conducted using MBA students as surrogates for managers. In decentralized firms, managers at various levels of the organization are involved in the capital budgeting process; however, more experienced managers may have different incentives and may incorporate organizational strategy more fully into their decisions. Second, this study was conducted in an experimental setting and tasks elements were necessarily simplified to accommodate the experimental setting, time constraints, and the need to isolate specific variables of interest. Real-world capital budgeting decisions are much more complex and involve greater quantities of information. In addition, the salience of the work environment may be greater in a real world setting than in the lab study, and thus the distribution of affective states may be greater and with that greater dispersion, still stronger effects might be expected to register. The results of this study have implications for decision aid use and design in capital investment decisions. But, our findings may contribute to a better understanding of decision making processes beyond the capital budgeting context. Most accounting decisions involve some degree of uncertainty and an understanding of the factors that influence these types of decisions is important for improving judgment and decision making quality (Bonner, 2008, Haka, 2007 and Loewenstein et al., 2008). Prior research has established that individual choices are influenced by the presence of ambiguous information in the decision task and has identified many factors that may influence ambiguity aversion and choice behavior. We contribute to this literature by examining a potential method for reducing the influence of outcome ambiguity on choice behavior in resource allocation decisions.