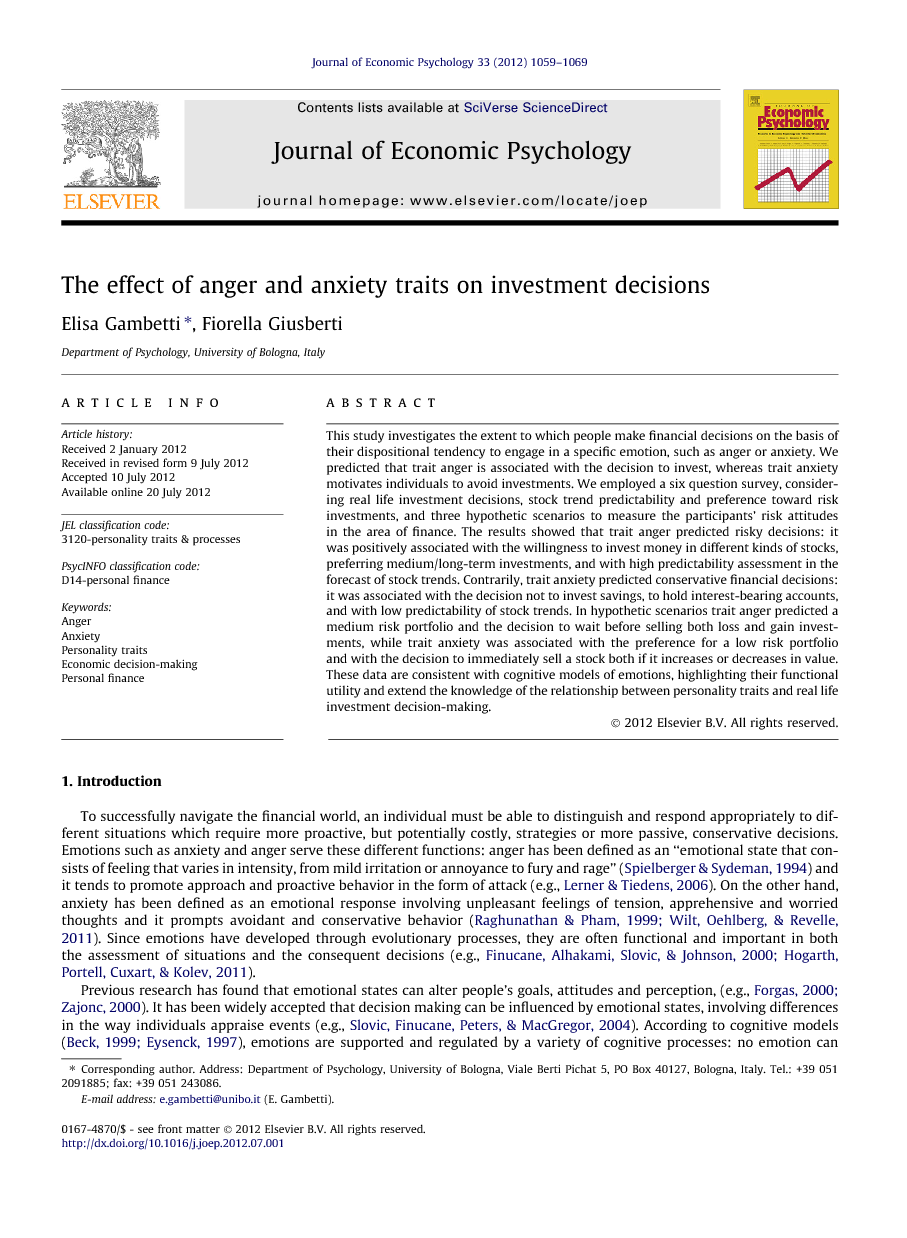 To successfully navigate the financial world, an individual must be able to distinguish and respond appropriately to different situations which require more proactive, but potentially costly, strategies or more passive, conservative decisions. Emotions such as anxiety and anger serve these different functions: anger has been defined as an ‘‘emotional state that consists of feeling that varies in intensity, from mild irritation or annoyance to fury and rage’’ (Spielberger & Sydeman, 1994) and it tends to promote approach and proactive behavior in the form of attack (e.g., Lerner & Tiedens, 2006). On the other hand, anxiety has been defined as an emotional response involving unpleasant feelings of tension, apprehensive and worried thoughts and it prompts avoidant and conservative behavior (Raghunathan & Pham, 1999; Wilt, Oehlberg, & Revelle, 2011). Since emotions have developed through evolutionary processes, they are often functional and important in both the assessment of situations and the consequent decisions (e.g., Finucane, Alhakami, Slovic, & Johnson, 2000; Hogarth, Portell, Cuxart, & Kolev, 2011). Previous research has found that emotional states can alter people’s goals, attitudes and perception, (e.g., Forgas, 2000; Zajonc, 2000). It has been widely accepted that decision making can be influenced by emotional states, involving differences in the way individuals appraise events (e.g., Slovic, Finucane, Peters, & MacGregor, 2004). According to cognitive models (Beck, 1999; Eysenck, 1997), emotions are supported and regulated by a variety of cognitive processes: no emotion can be without a cognitive appraisal attributing a meaning to situations. Peters, Västfäll, Gärling, and Slovic (2006) suggested that cognitive assessments of the environment, activated by specific emotions, have an important influence on decision making: they act as informational, motivational and processing functions and so they have specific impacts on outcome effects. Previous studies have shown that anger increases the tendency to perceive situations as predictable, comprehensible and under individual control (Ellsworth, Scherer, Davidson, Scherer, & Goldsmith, 2003), and it increases optimism and feelings of invulnerability (Quigley & Tedeschi, 1996). As a consequence, anger is related to the perception of low risk across new situations (e.g., Lowenstein & Lerner, 2003). On the other hand, anxiety is linked to an attentional bias toward threat-related information and to evaluating ambiguous stimuli as negative ones (e.g., Bar-Haim, Lamy, & Glickman, 2005; Gu, Ge, Jiang, & Luo, 2010). Moreover, anxiety is associated with the perception of uncertainty, unpleasantness and low situational control (e.g. Smith & Ellsworth, 1985). In this sense, when an individual feels anxious the perception of risk across a situation increases, because of a disproportional dwelling on loss outcomes. In the assessment of emotions, it is important to distinguish between the intensity of the experience of the emotional states and the individual differences in the tendency to react with these specific emotions across time and situations, that is personality traits (e.g., Lazarus, 1994). Over the last 15 years there have been an increasing number of studies about the influence that personality traits have on financial perception and decisions (e.g., Gibson, 2006). Traditionally, economic theory implies that investment decisions should be based on expected utility. That is, the best decisions are those that maximize the expected utility of the money obtained. Economists define risk as an objective index that has to be used when deciding on which solution to invest in. They highlight the importance of looking at the risk/return ratio of the selected investment. From this point of view, investment risk is the variance of stock utility (e.g., Rabin & Thaler, 2001). However, several studies showed that people do not assess investment risk objectively (e.g., Parker & Fischhoff, 2005). Research in judgment and decision making has shown that risk perception, that is the intuitive judgment about the occurrence of negative outcomes and the severity of the associated consequences, and risk acceptance, which involves the subjective balancing of benefits with risks and their acceptability, are influenced by many other factors aside from the utility of money, such as personality traits. A variety of studies have attempted to explore types and traits correlated with investment perception and behavior.For example, Carducci and Wong (1998) found that persons with a Type A personality are more willing to take higher levels of risk in all financial matters than Type B individuals. There is also evidence of a desire for ‘‘sensation seeking’’ by some persons in terms of their financial management (Wong & Carducci, 1991). These personality characteristics, in combination with specific socioeconomic background (i.e. being male, older, married, professionally employed with higher incomes, more education, more financial knowledge, and increased economic expectations), predicted risk acceptance, tolerating declines in the investments’ prices while waiting for them to increase in value, in everyday money matters (Grable, 2000). Fenton O’Creevy, Nicholson, Soane, and Willman (2004) found that successful professional traders for European investment banks, who have likely high levels of risk acceptance, tend to be emotionally stable and open to new experiences. Extraversion and conscientiousness were both found to be positively related to short-term investment intentions (Mayfield, Perdue, & Wooten, 2008). On the other hand, other authors have concluded, without studying large samples of traders, that personality traits are themselves not important for trading and investment decisions (e.g., Lo & Repin, 2005). Regarding the anger and anxiety traits, there is evidence suggesting a relationship between trait anger and risky decisions in hypothetic financial, social and health scenarios (e.g., Gambetti & Giusberti, 2009), as well as a relationship between individual differences in trait anxiety, worry, and social anxiety and risk-avoidance in a behavioral risk-taking task (e.g., Maner et al., 2007). Recently, a study found a significant negative correlation between trait anxiety and investment behavior, but only in the case of the immediate resolution of risk (van Winden, Krawczyk, & Hopfensitz, 2011). In general, although the literature has shown that anger and anxiety traits predict risk perception and risk acceptance, few studies have investigated the relationship between such personality traits and real life investment decisions. Research in this field is in fact primarily experimental and there is a general disagreement about the level of external validity of the results because this kind of studies tested participants in artificial conditions that bear little resemblance to the outside world (e.g., Gigerenzer, 2008). Thus, it is important to further investigate whether anger and anxiety traits play different roles in investment perception and decision in real domains of human life.

We claim that the results have potential implications for both theories of decision making and for investment companies or banks. Economists have suggested that the best decisions in the financial field are not linked to saving money, but to investing in a diversified portfolio for a medium-long term (e.g., Barber & Odean, 2000). In our study, trait anxious individuals did not risk investing money in low predictable stocks nor in those usually perceived as sound, such as property bonds, industrials or insurance products: trait anxious individuals seem to be over prudent whereas trait anger individuals make ‘‘better decisions’’ as regards economic gains. As our findings suggest, personality traits may shape investment choices and decisions. These data fit with a growing body of evidence suggesting that individual differences in affective experiences influence risk decision-making (e.g., Maner et al., 2007; Slovic et al., 2004). Our study suggests the utility of a motivationbased approach to decision-making and is consistent with other theories positing emotion-specific influences on judgments and decisions (e.g., Lerner & Keltner, 2000). These findings also have practical implications for advisors or banks interested in identifying people most at risk for taking potentially risky decisions and, in turn, people not disposed to invest their money or to make investment decisions.