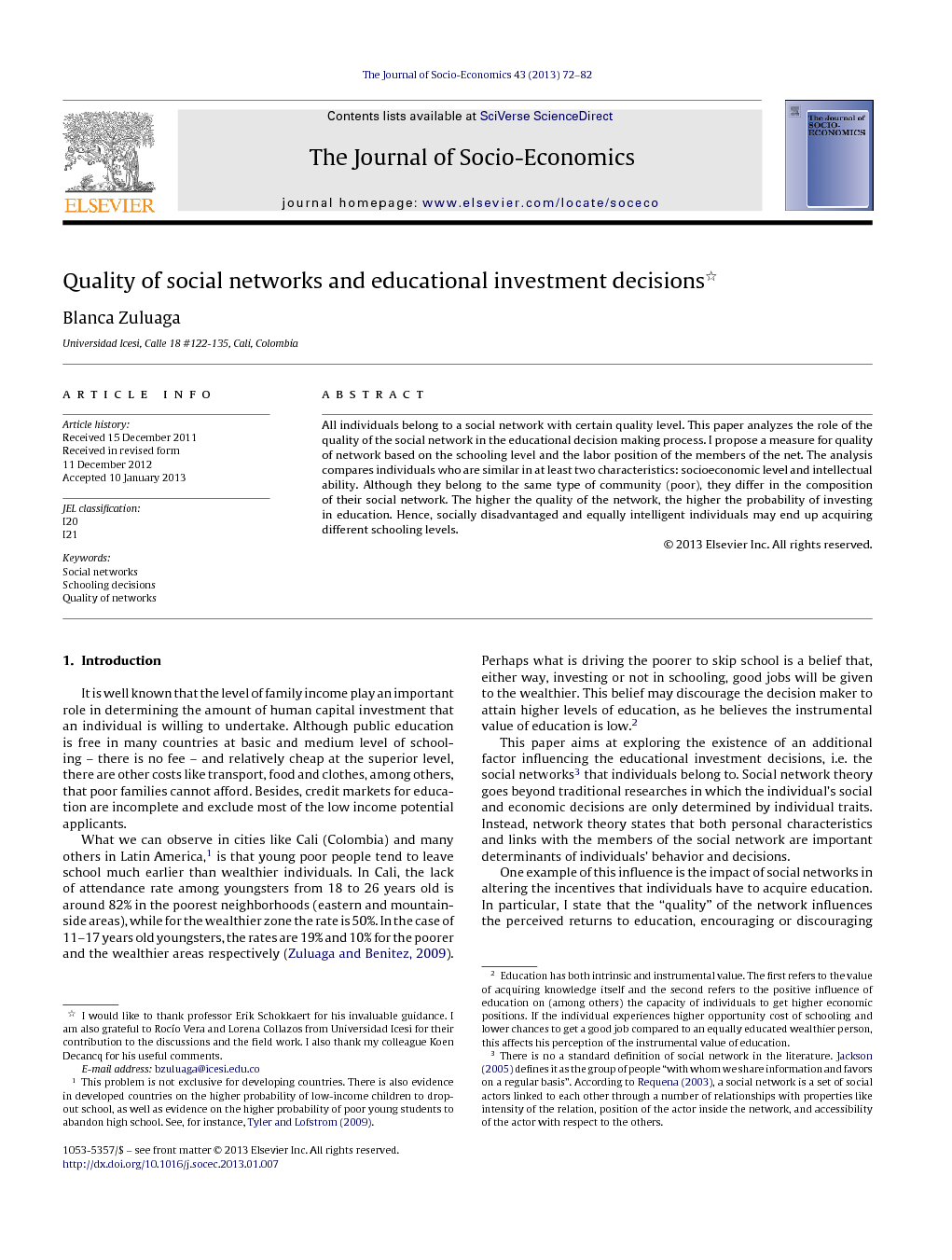 All individuals belong to a social network with certain quality level. This paper analyzes the role of the quality of the social network in the educational decision making process. I propose a measure for quality of network based on the schooling level and the labor position of the members of the net. The analysis compares individuals who are similar in at least two characteristics: socioeconomic level and intellectual ability. Although they belong to the same type of community (poor), they differ in the composition of their social network. The higher the quality of the network, the higher the probability of investing in education. Hence, socially disadvantaged and equally intelligent individuals may end up acquiring different schooling levels.

This paper explores the role of the network quality on the schooling decisions of individuals. I want to show that, beyond socioeconomic background, individuals with higher quality of network – compared to their peers living in the same type of neighborhood – will experience higher probability to continue studying. Specifically, the network quality influences the perception of individuals on the returns to education, which determines the probability to continue higher education. I compare two groups of people belonging to the same type of poor neighborhood and with similar intellectual ability. The difference between them is that individuals in the first group have continued studying after secondary school, while those in the comparison group have not continued. A survey was applied to individuals of the two groups in order to obtain information about the quality of their social networks. A measure for quality network is proposed, based on the weighted sum of the qualities of the network's members. The quality of role models is related to their schooling level and their position at the labor market. As for the weight of each member, it is considered that the type of relationship (relative, friends or acquaintances) is not sufficient criterion to determine it. Other factors such us intimacy, confidence, emotional and economic support are relevant and may convert an initially weak tie into a key tie. Social networks are important in shaping the motivation, aspirations and expectations of individuals. These, in turn, affect the behavior and decisions of people in crucial aspects such as investment in human capital. It suggests, in line with the existing literature, that educational achievements of members of poor communities may generate a multiplicative effect, through social networks, beyond the private return of the educated individual. Results of the Logit model suggest the relevance of the quality of the network in schooling decisions, controlling for parental background. This might be one of the reason why it is possible to find individuals belonging to the same type of community or neighborhood, who share certain attributes like family income and ability, ending up at different levels of schooling, expected future income and expected social mobility. If we accept that social networks matter, a relevant question could be then: how can the quality of networks for individuals in poor neighborhoods be strengthened? Let us mention (not develop) some strategies towards that direction. The two last strategies do not follow directly from the analysis of this paper. Still, they are mentioned for their relevance to improve the network's quality of impoverished individuals. - From the collected information it was seen that, in several cases, the positive influence of a teacher plays an important role in shaping individuals behavior. From the target group, 17% (22%) of the individuals had teachers whose weight was adjusted by 4 (3) factors. There should be some mechanisms to strengthen the relationship teacher-students to better exploit this channel of positive influence. - Cities must offer more spaces to be indistinctly used by people from different income groups. Cities in Colombia are designed to promote polarization, which decreases the opportunities for poor youth to expand their social networks, losing the potential advantages of higher information received through possible weak ties. At least from the government initiatives, this practice should be reversed in order to avoid segregation. - Social housing (viviendas de interés social) should not be constructed in isolated places, as it is usual in Colombia. It is important that they are integrated to the city so that inhabitants may benefit from the infrastructure of the city and may easily socialize. - Students from high quality private universities have more chances to engage in the labor market, because of the good networking and prestige of the academic programs. Education in Colombia is polarized and poor students normally are excluded (not in theory but in practice) from private universities. Thus, good students from public schools should be guaranteed a given number of undergraduate scholarships in high quality private universities. This should not reduce the opportunity for them to access the scarce current scholarship offers. - A more ambitious but highly beneficial proposal is that at least one member of each family should benefit from a scholarship to cover the complete educational cycle. This member will have a positive incidence in the whole family group. Although social networks are important, it should be stressed that they are not a substitute for well-planned public policy and well-targeted public spending. Instead, social networks complement the governmental action to avoid educational exclusion of the poor and the segmentation of the labor market.