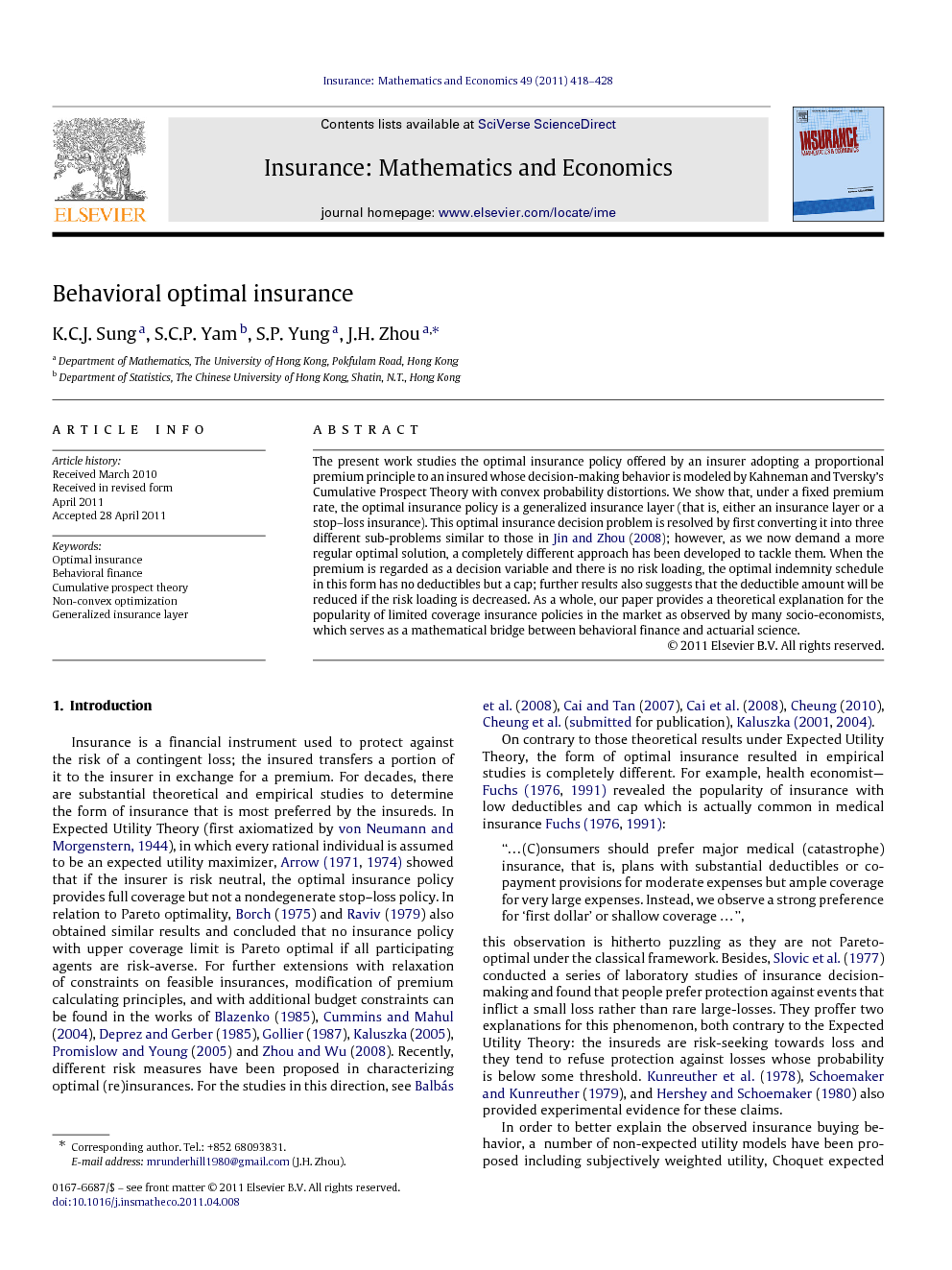 The present work studies the optimal insurance policy offered by an insurer adopting a proportional premium principle to an insured whose decision-making behavior is modeled by Kahneman and Tversky’s Cumulative Prospect Theory with convex probability distortions. We show that, under a fixed premium rate, the optimal insurance policy is a generalized insurance layer (that is, either an insurance layer or a stop–loss insurance). This optimal insurance decision problem is resolved by first converting it into three different sub-problems similar to those in Jin and Zhou (2008); however, as we now demand a more regular optimal solution, a completely different approach has been developed to tackle them. When the premium is regarded as a decision variable and there is no risk loading, the optimal indemnity schedule in this form has no deductibles but a cap; further results also suggests that the deductible amount will be reduced if the risk loading is decreased. As a whole, our paper provides a theoretical explanation for the popularity of limited coverage insurance policies in the market as observed by many socio-economists, which serves as a mathematical bridge between behavioral finance and actuarial science.

In this paper, under the formulation first proposed by Jin and Zhou (2008), we have studied the optimal insurance design between an insurer adopting the proportional premium principle and an insured whose decision-making behavior is modeled by Kahneman and Tversky’s Cumulative Prospect Theory (Kahneman and Tversky, 1979 and Tversky and Kahneman, 1992) under convex distortion. Because of the empirical evidence that regarding insurance buying behavior, people underweight all uncertain events, not only the ‘average’, it is reasonable to assume that the probability distortion is convex. Under this assumption and converting the original optimal insurance decision problem into three different sub-problems similar to those in Jin and Zhou (2008), an optimal insurance policy is found. Our result shows that either an insurance layer or a stop–loss insurance is optimal for any fixed premium. It explains the popularity of insurance layers in real-life, especially common medical insurances, which are not Pareto-optimal in Expected Utility Theory. Although similar results have been obtained in Raviv (1979), in which it is assumed that the risk-averse insurer is restricted by regulation, our result gives theoretical explanation from the insured’s point of view. When the premium is another decision variable, we have shown that the optimal insurance policy in this form has no deductibles but with an upper coverage, provided that there are no risk loading. These results are in line with the historical observations. For the case that the distortion is reverse S-shaped, several results have been obtained and will be enclosed in future discussions. For a further extension, it is interesting to analyze optimal insurance under the alternative premium calculation principle, for example the convex premium principle (Deprez and Gerber, 1985) and Wang’s premium principle (Wang, 1996, Wang et al., 1997 and Young, 1999) among others. To conclude, this work connects a well-known theory in behavioral finance which has sufficient empirical evidence to real-life insurance buying behavior, and initiates the research on behavioral optimal insurance.